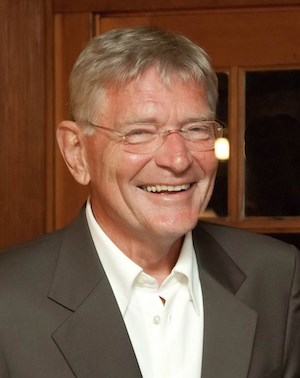 Sas’ life was book-ended with the holidays of two Saints which symbolically characterized his life’s journey.  He was born on February 14, 1938, St. Valentine’s Day; Sas’ life was characterized by his single-minded love of his family, his friends, his profession, and his philosophical foundations of what is right and not right.  Sas continued his journey on March 17, 2020, St. Patrick’s Day, a holiday characterized by the hints of Spring and thus a new season and the occasion for a rousing gathering of family and friends to celebrate food, friendship, wine, and his favourite Scotch. Sas recently celebrated his 82nd birthday with a gift from his daughter, a flight over L'Islet, the beloved Georgian Bay island on which they'd built their family cottage over 30 years ago.  Sas was predeceased in 2011 by his wife Ragna and leaves behind his adoring daughter Alexa Bersenas, son-in-law Steven Woodard, grandsons Lucas and Aidan, his second love for life Barbara Roud, his dear friend Joe Totaro, a wealth of cherished family and friends, and his colleagues from "Bersenas, Jacobsen, Chouest, Thomson, Blackburn", every one of whom embrace his life and mourn his loss. As Sas said his final goodbyes during his “Celebration of Family and Friends” in early February, a private family service will be held at a later date. For those interested, a donation in memory of Sas can be made to the Toronto Symphony Orchestra or the charity of your choosing.  We invite you to leave your memories and donations online.

Memories and Condolences
We welcome your feedback and encourage you to share your thoughts on this story. We ask that you be respectful of others and their points of view, refrain from personal attacks and stay on topic. To learn about our commenting policies and how we moderate, please read our Community Guidelines.