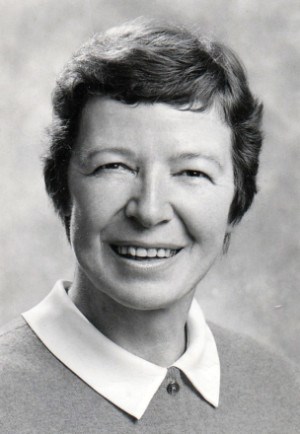 One week before her 98th birthday, on Saturday, July 11, 2020, Anne Cameron Godfrey passed away at the Village of Riverside Glen with her longtime friend Deborrah Hadwen at her side. She passed quietly, as she lived, with dignity and grace. Anne was the beloved wife of the late Gerry (1975) and loving mother of the late Lorian McCleary (1971).

She is fondly remembered by her nephew, Brian Clarke of Barbados, nieces Kathy Clarke of Toronto and Elizabeth Monk of England, great niece and nephew, Dr. Emily Monk and Nick Monk, her sister-in-law Barbara, niece Maureen Beddome and nephew David Beddome and their families. Special thoughts go out to her former son-in-law, Ken McCleary, his wife Wendy and their children, Gerry and Martha as they mourn “Lady Anne”. Anne will be missed by countless friends and all those who were lucky enough to know her.

She was born Anne Beddome in Fernie, BC. We were regularly told the only peaches worth eating, were grown in the Okanagan. Anne lived most of her childhood in Vernon. She met and married her beloved husband, Gerry Godfrey in 1944.

The Godfrey’s settled in Guelph in 1960 where they raised their daughter, Lorian. In 1971, a tragic accident in Toronto, took Lorian from them and her husband, Ken McCleary. Anne had the support of many dear friends on whom she leaned during those difficult years.

Anne was an extremely active volunteer in Guelph. In 1996, the YM/YWCA honoured her as the first recipient of the Women of Distinction Award “Community Life”. She was nominated and received the Mayor’s Award for Excellence in Volunteering and Leadership in 2018. During the presentation Mayor Cam Guthrie, said, “Guelph is the city we know today, largely because of Anne Godfrey”.

A member of City Council for six terms, she was the first woman to chair the Financial Committee. Anne worked tirelessly with varied interests: She was on the team that founded the United Way. Anne also chaired the committee that established the River Run Centre. She served on many Boards including the School Board, Homewood Health Center, CMHA, to name a few. She was involved with the Children’s Aide, MS, CFUW, Big Sisters, Guelph Arts Council and Women in Crisis, among others. Her accomplishments and committees were too numerous to mention all of them, but let it be known that she was a formidable woman.

She was passionate about news, politics and her friends. She played bridge well into her 90’s. She loved ice cream and chocolate, often marveling that even after a good meal, she always was able to find room for both. She was determined (some may call stubborn), focused and considerate, all while maintaining her sense of humour.

Anne had recently been receiving excellent care from her team in the Erin Neighbourhood at Riverside Glen, Longterm Care Home. Anne now joins Gerry, Lorian, Jean, John, Marg, Betty, Hamish, Bambi, Ted, Ken, Bill and the rest of the people who have been waiting for her. We will miss her.

Due to the difficulties resulting from Covid, she was not able to fulfill her longtime wish to donate her body to Research. There will not be a service, but I know she would love it if you chose to support the United Way in your community, in her memory.