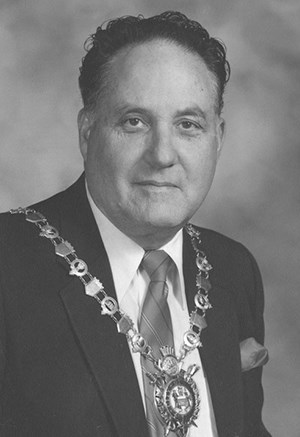 It is with heavy hearts that we announce the peaceful passing of our father, grandfather, great grandfather at St. Joseph's Health Center, Guelph, on Friday, January 8th, 2021 in his 91st year.  He was the beloved husband of the late Jean Jary (2015) and father of the late Sandra Priems (2006) and is survived by his children Linda, Norm (Val) and Marilyn and 5 grandchildren and four great grandchildren.

Honoured by the city "for opening the doors of City Hall to the democratic process." A Guelph Mercury editorial on November 23, 1974, described it as "A Civic Revolution”. The editorial stated "he has opened up City Council to the people. Few places in the western world have council forums at which taxpayers are actively encouraged to present their beefs.Guelph does, thanks to Mayor Jary. Norm considers this his most important and lasting accomplishment -Involving the people. The practice continues today."

Another Mercury editorial in 1978 applauded his “honesty, fairness, approachability and impartiality” and "as a public speaker he has no peers in municipal government in Canada.

Norm was featured in the Historic Guelph 2010 publication by the Guelph Historical Society. An essay by history professor Dr. Debra Nash-Chambers of Laurier University is titled Mayor of all the people: Norm Jary and the ‘Civic Revolution ' in late 20th century Guelph, Ontario.

He met the Premier of China, Shah and Empress of Iran, Terry Fox, Colonel Sanders, and Princess Anne, among many others.

In 2000 the city named NORM JARY PARK in recognition of his public service. It is almost 25 acres with three softball diamonds, two tennis courts, a basketball court, a soccer pitch, children’s splash pad and a playground. 20 years later, the park is still enjoyed by many.

Norm received The Commemorative Medal for the 150th Anniversary of the Confederation of Canada for service to Community and Country.Norm is also a recipient of Her Majesty the Queen’s Golden Jubilee Medal for Lifetime Achievement.

He was made a Life Member of Family and Children’s Services for Guelph and Wellington County. He and his wife Jean made Life Members of Guelph Wellington Community Living. Norm annually hosted the Norm Jary Arc Industries Golf Tournament that raised over $700 thousand for the mentally challenged.

Norm was also made a Paul Harris Fellow by Rotary for “Working to achieve better understanding and friendly relations among people of the world”.

He was named a Communicator of the Year by Guelph Toastmasters, and was a news and sports director for CJOY Radio, known as the ‘voice of Guelph’ for many years.

He was honoured by the Ontario Teachers Federation for Excellence in Educational Broadcasting. His Friday Current Events Program was piped into many Guelph and county schools.

Norm also did some television play-by-play for the New York Rangers of the National Hockey League. In 1966 he broadcast Bobby Hull’s historic 51st goal, when he broke “Rocket” Richard’s all-time scoring record of 50 goals in a single season. A historic goal. He was elected to the Guelph and University Sports Halls-of-Fame.

Some important developments that occurred during Norm Jary’s Mayoralty,with a lot of people working together are:

- Guelph Arts Council was formed as well as the new Civic Museum.

- The expansion of the Water Pollution Central Plant to handle the future growth of Guelph.

Above all of Norm’s accomplishments, his greatest was his family.

Wherever you may be, please raise a glass to celebrate in the life of Norman Willard Jary. Gone but never forgotten.

As per Norm’s wishes, cremation has taken place and a private family gathering will take place at a later date.

Those wishing to make memorial donations in honour of Norm may do so to the MS Society. Cards are available at the funeral home, 1099 Gordon St. Guelph.