Gryphon football in the time of the War Measures Act

Players from the 1970 Gryphon football team remember a life-changing trip to Ottawa
Nov 8, 2020 9:00 AM By: David DiCenzo 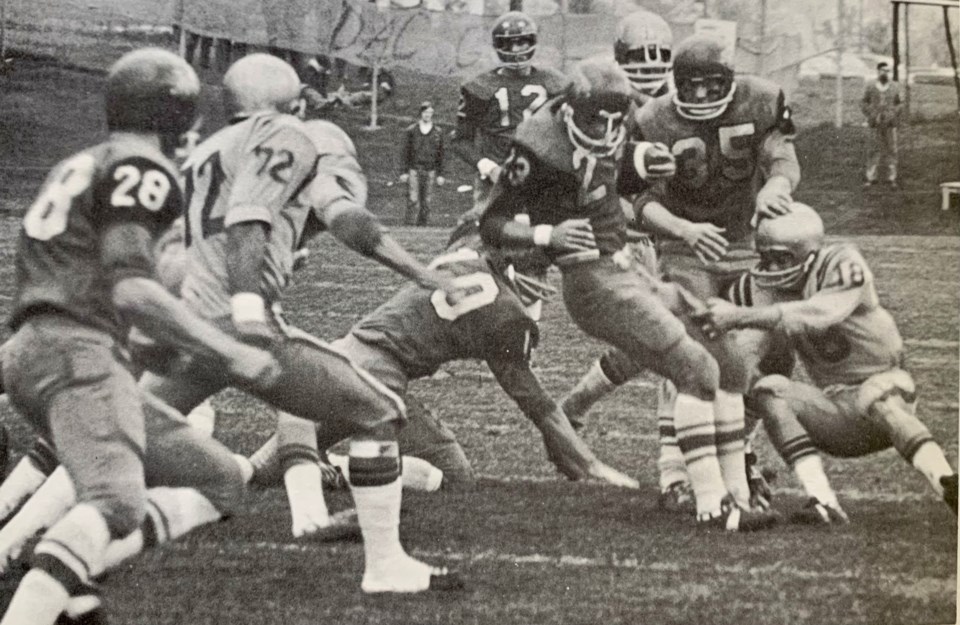 ‘Uncertainty’ is one of the most accurate words to describe the feelings of many people during an unforgettable 2020. It’s the same for many members of the community, as well as those who make up Gryphon Football.

Exactly 50 years ago, a similar feeling existed in this country.

It wasn’t a devastating virus causing the angst – it was a decisive shift in the political climate that impacted Canadians, including a group of young football players from Guelph.

Prime Minister Pierre Trudeau invoked the War Measures Act in 1970 as a response to extreme actions taken by the Front de libération du Québec (FLQ). Trudeau’s move signified the serious nature of what was a happening in the country, which also made a typical Gryphon Football trip to Ottawa that fall all the more unique.

As Guelph was preparing to take the long bus ride to the nation’s capital, Gryphon rookie Bill Laidlaw heard the chatter around campus.

“What really struck me was in residence or the cafeteria, you could overhear things,” says Laidlaw, who remembers discussing with teammates just how bad things could get in the country.

“A cabinet minister was kidnapped, they were holding a trade commissioner, we may go to a lockdown. And there is going to be a revolution.

“As an 18 or 19 year old, you thought, ‘Holy smokes.’ There was a certain amount of trepidation and fear. It was a scary time and it had never happened before in our history.”

The War Measures Act had only been utilized twice in Canadian history prior to October 1970, each of which were during war time. But the October Crisis prompted Trudeau to use the legislation again. The FLQ kidnapped the Deputy Premier Pierre Laporte and British diplomat James Cross.

Laporte was murdered, signifying a new and dangerous time in the country. The War Measures Act limited civil liberties, gave police more power, and enabled the military to have a visible presence throughout cities like Ottawa and Montreal.

That would add a different dimension to Guelph’s game with the Carleton Ravens. Laidlaw’s fellow rookie Robert Whitfield, an Aggie student at the time, was also aware of the changing political climate prior to the trip. But football was obviously on the front burner.

“The bus was loaded and I vividly remember (coach) Dick Brown getting on and saying, ‘I just finished looking at the game films from Windsor,’” says Whitfield. “’You guys aren’t as good as you think you are. And you better take this game seriously.’

“That was it. The staff got on, the doors closed, and we headed down the road to Ottawa.”

Laidlaw says there was a stop in Kemptville at the Agricultural College affiliated with the U of G and after a light practice there, they resumed the trip to Ottawa. They arrived and checked in at the Sheraton Hotel. The young Gryphons were thrilled to learn that the Winnipeg Blue Bombers were staying there as well, as they prepared for a CFL clash with the Ottawa Rough Riders.

On Saturday morning, the team got a feel for what was happening around the city. Whitfield got up early on game day and after breakfast, had a couple hours to himself before the bus left for the stadium.

“I went out for a walk,” he says. “I don’t remember where it was but it had to be some place important because all of a sudden, I came upon a uniformed soldier, fully decked out with a weapon. I said, ‘Oh crap.’ I basically turned around and walked back to the hotel where I killed time until we had to go to the game.”

“Going out to the bus that Saturday morning, we were met by military patrolling the streets and jeeps with soldiers holding machine guns in the back,” adds Laidlaw. “Ottawa was under a state of siege. The downtown was like a city at war. Our bus drove around the city for us to see it all.

“You went into this town and it basically had soldiers everywhere. Not just at the Parliament buildings but circulating in the streets everywhere there were government buildings. It was something to remember. For Canadians, it was a real moment in history to realize that this could happen here.”

The game was a miserable experience for the Gryphons. It had poured rain in Ottawa and they lost 23-15 to the Ravens in a mud bowl. Guelph travelled to Ottawa again weeks later to play the Gee-Gees in the old Central Canada Intercollegiate Football Conference league championship, which ended in a 29-24 loss.

But those results didn’t stand out. The invoking of the War Measures Act and the experience in Ottawa had a profound impact on Laidlaw. He also went to the Grey Cup in Montreal that year and the scene was similar with military members sporting weapons and shields.

It reminded him of what he had learned of the fascist presence in Europe during World War II and he had the same feeling while on a trip to France in 1987 in the aftermath of UTA Flight 772 being shot down by Libyan terrorists.

That trip to Ottawa changed something in him. He would go on to study politics and social unrest, including writing a thesis on the 1946 strike at steel giant Stelco that caused chaos in the streets of Hamilton.

“When you’re young, you don’t always put things in context,” says Laidlaw. “I was a rookie and it was neat to be going to Ottawa, dressing and starting for the team. That overtook it all. But on the way back, and later on in life, you reflect. It was the time of the War Measures Act. It was a big deal and we were right in the midst of it.

“It made me much more aware of things. It stimulated me. The next year, I moved right into politics and the rest was history.”