Keeping the Gryphons game ready in times of COVID

Strength and conditioning coach Adam Kania is charged with helping keep the Gryphon football squad in game shape even when there are no games
Oct 13, 2020 3:00 PM By: Rob Massey 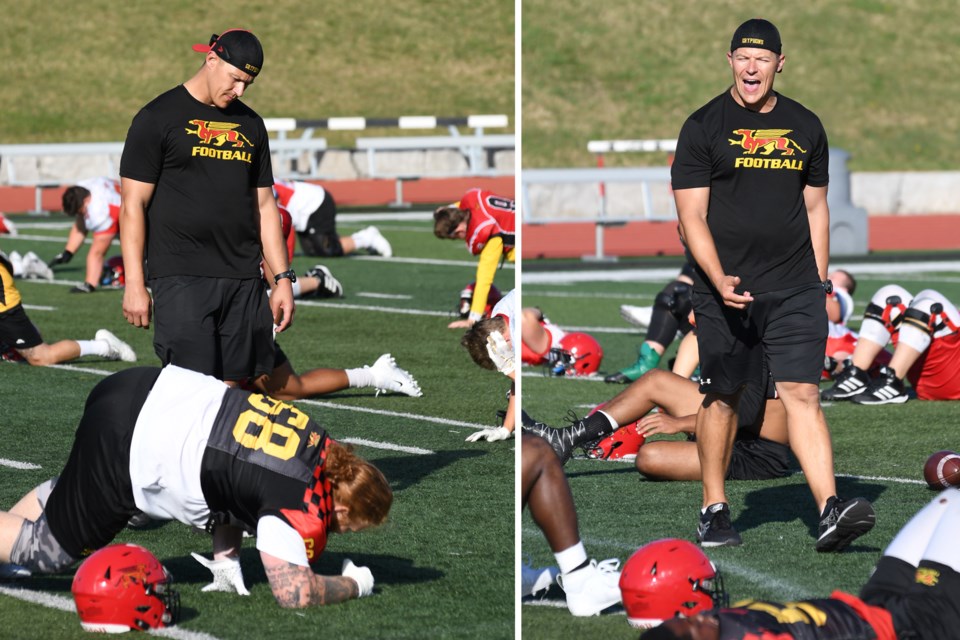 Usually around the Thanksgiving weekend the Guelph Gryphons are preparing for their final two games of the Ontario university (OUA) football league’s regular season and the league’s playoffs.

Of course, 2020 has been anything but a usual year. There is no OUA football season this year and the Gryphons just returned to modified and scaled-down optional workouts late last month.

“I'm just happy to be back in the swing of things with the guys after a very long layoff,” Gryphon strength and conditioning coach Adam Kania said. “Things are progressing well and the guys are happy to be back together so there's a little bit of a semblance of normalcy to it which is nice.”

Most players in the area are back to working out, but in smaller sizes.

“Structurally speaking, there are obviously rules and regulations with how many players we can get together at any given time,” Kania said. “The guys have been able see each other whether it's through Zoom or the various team meetings that we've done, but when you actually get the whole face-to-face and able to put the cleats on and able to step on the field at Alumni Stadium, it was actually really, really nice.

"I'm happy for them and I'm happy for the coaching staff, especially the new guys that we've just recruited to come in. They're getting a little bit of experience, not the full one just yet, but we finally got them integrated with the team. That's a step forward.”

The Gryphons have had to relocate their weight room, but that had nothing to do with the coronavirus pandemic.

“We have a temporary room as Alumni Stadium is getting redone for a massive upgrade that we're going to have done August 2021 next year. That being said, we're right beside what's known as the Gryphon Performance Centre which is where the rest of the varsity teams train,” Kania said.

“Our room allows for 12 active athletes in there at any given time so that's what we're doing. We have a couple of coaches in there kind of just watching over the workout and we have 12 active bodies in there. "

“That's all that we're allotted for now,” Kania said. “I've written up a couple of other workouts for them to do on their own whether it's at the fitness centre or they go to their own personal gyms.”

Having the players getting workout sessions on campus is a big change from what the team could do in the spring and summer months.

“At the very beginning it was very tough because you had to make the assumption that not everybody had access to equipment so the program was basically let's continue running, let's continue stretching and being mobile and then it was the body weight workout,” Kania said. “It's not exactly football centred, but we wanted the guys to just be able to stay as fit as possible. We just had to adapt to our means as the spring and summer kicked in.”

That made it difficult to produce personal plans for the players, especially any Gryphon newcomer.

“The freshmen that we just recruited, we didn't have any notes on them from a strength and conditioning standpoint,” Kania said. “We didn't know how they moved and we didn't know how they ran so the program had to be somewhat generic and give them options that if they did have weights they were able to switch whatever the particular exercise was to a weighted option.”

Those plans put the onus on the players to actually do their workouts.

“The guys were running hills all the way through spring and summer which is a great way to work on both their aerobic capacity and work on some of their spring capabilities,” Kania said. “You could see the guys that were kind of committed to the program and the guys that weren't. The biggest hurdle for us was making sure that we had total adherence or compliance to it. If we don't see the guys, we don't know what they're actually doing. We can hear one thing and see another, but we kept saying over and over again that it'll be very evident to the coaching staff once we do get on the field who has been doing the work and who hasn't. I think it's just like any team, we noticed that that fact did come true.”

However, the workouts are optional although most players who are in the area have chosen to attend.

“Nothing is mandatory this year,” Kania said. “It's completely optional whether the athletes choose to come to Guelph if they're new or even if they are veterans. We have some guys that are from out west that just decided to stay out west since everything is online and it doesn't make sense for them to move here to Guelph, do their work and train with us. In the name of cost, some guys decided to stay home.

“Then again we have some incoming rookies that are from Hamilton, for example, that decided to move into the city because they want to be as engrained in the culture as soon as possible and obviously get their training in.”

The lack of a U Sports Canadian university football season does put the players who would have been first-year players this season in a unique position as they will retain that first-year status in 2021.

With coronavirus cases on the rise in Ontario, though, the in-person workouts could be short-lived.

“Plan A is what we're doing right now,” Kania said. “We know that Plan B is we're going to get shut down again at any given point. In my book and the way I'm communicating it to our team is that I'm thankful for the time that we are getting with each other right now and we're taking advantage of it as much as we can and just trying to get as many good habits engrained in the guys once again.

“If it happens, it happens. We don't want to dwell on that right now. It's not something we're in control of. All we can do is do our best to keep our distance, wear our masks, sanitize everything, workout safely and just train for that next season safely.”

Mike Cazzola's hockey journey lands him in Cortina, Italy
Sep 28, 2020 7:00 AM
Comments
We welcome your feedback and encourage you to share your thoughts. We ask that you be respectful of others and their points of view, refrain from personal attacks and stay on topic. To learn about our commenting policies and how we moderate, please read our Community Guidelines.