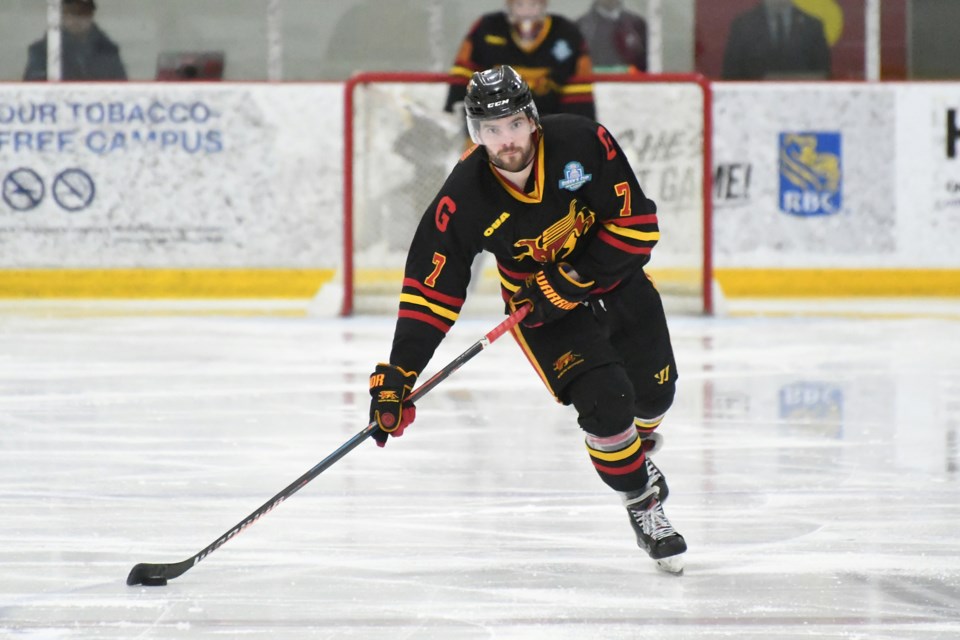 Zach McFadden of the Guelph Gryphons gets set to take a shot during the Queen's Cup game at the Gryphon Centre. Rob Massey for GuelphToday

Zach McFadden couldn’t have asked for a better ending for the Guelph portion of his competitive hockey career.

The Guelphite was one of the first to hoist the Queen’s Cup over his head on the Gryphon Centre ice a little more than a week ago when the Guelph Gryphons captured the Ontario University Athletics men’s hockey championship following their win over the Ottawa Gee-Gees in triple overtime.

“It's a great way to end it, that's the only way to put it,” the defenceman said. “I'm so thankful having my family here and having the teammates I do, the coaches and everything. I'm just so proud of our guys, too. It's been awesome.”

And it was the first time he’d ever lifted a championship trophy in hockey, making it the highlight of many seasons of play in a Guelph uniform.

“It's got to be tonight, easily,” he said. “I've never been a champion in any of my leagues so to finally get a championship on home ice is probably the greatest feeling I've ever had. I've got complete chills as I speak right now.”

The 24-year-old came up through the Guelph Minor Hockey Association, culminating with a season of bantam AAA in 20099-10 and minor midget AAA the following year when the GMHA teams were known as the Junior Storm.

He had 14 points and 67 penalty minutes in 50 games in minor midget AAA and that got him drafted in the 12th round, 228th overall, by the Sudbury Wolves in the 2011 OHL priority draft.

McFadden got in 11 games with the Wolves before returning to the Royal City to play junior B hockey for the Guelph Hurricanes in the Greater Ontario Junior Hockey League. He spent parts of four seasons with the Canes, getting 65 points and 273 penalty minutes in 94 games.

He also had another stint in major junior, getting two points and four penalty minutes in 29 games with the Charlottetown Islanders of the Quebec Major Junior Hockey League before he was back in Guelph again, this time with the Gryphons.

In order to get some playing time with the Gryphs, McFadden spent some time at forward, something he’d also done with the Canes.

“I started playing forward in my first year for a bit,” he said. “I was just trying to do anything I could and then I made the transition to D and it's been great ever since. I feel I can contribute on defence just as much as anyone.”

It might sound odd, but playing on the forward lines helped McFadden with his defensive play.

“It's just a great experience and for offensive awareness, it really helped me,” he said.

While playing with the Gryphons, McFadden also had the opportunity to play with older brother Josh, also a defenceman.

“It was special,” Zach said. “He is four years older and coming back from the AHL to come play with me was honestly so special and I honestly wish he was here to share this (Queen’s Cup win), but he'll be back to share it soon.”

“He's honestly probably the best D-man to come through this program,” Zach said. “He was like a fourth coach for us, too. He'd take all of us D-men under his wing, not just me, and he was just a special guy. It was special.”

Also special for Zach was being able to play in front of family and friends on home ice.

“I had my parents here coming to every game and that has been something special,” he said. “It's something I'll take to the grave with me.”

And he was also grateful to get to push the memories of the 2019 Queen’s Cup loss to the Queen’s Gaels into the back of his mind.

“I just think that we kind of felt that pain and we knew just how much work it is to even get here. We knew it was huge. We had a chance to shut it down and finally we won it,” he said. “It's a great feeling.”

To some degree, Zach’s hockey career has followed the same path as older brother Josh’s career. Josh came up through the GMHA system and was selected in an OHL draft as he was picked in the ninth round in 2007 by the Toronto St. Michael’s Majors. He also played with Sudbury in the OHL and with the Gryphons.

Now Josh is in his second season playing in Europe. He was with the Sheffield Steelers in the Elite Ice Hockey League in the United Kingdom last winter and EV Landshut in DEL2, the second division of hockey in Germany.

“I'm hoping to go to Europe next year,” he said. “I think I can and hopefully in a high league, too. We'll see what happens.”

Guelph Olympian disappointed but understanding of cancellation
Mar 25, 2020 11:09 AM

Young Spartan keeps his cool to help Centennial capture District 10 hoops title (10 photos)
Feb 23, 2020 8:00 PM
Comments
We welcome your feedback and encourage you to share your thoughts. We ask that you be respectful of others and their points of view, refrain from personal attacks and stay on topic. To learn about our commenting policies and how we moderate, please read our Community Guidelines.