Roumel looking to guide Guelph Royals back to baseball glory 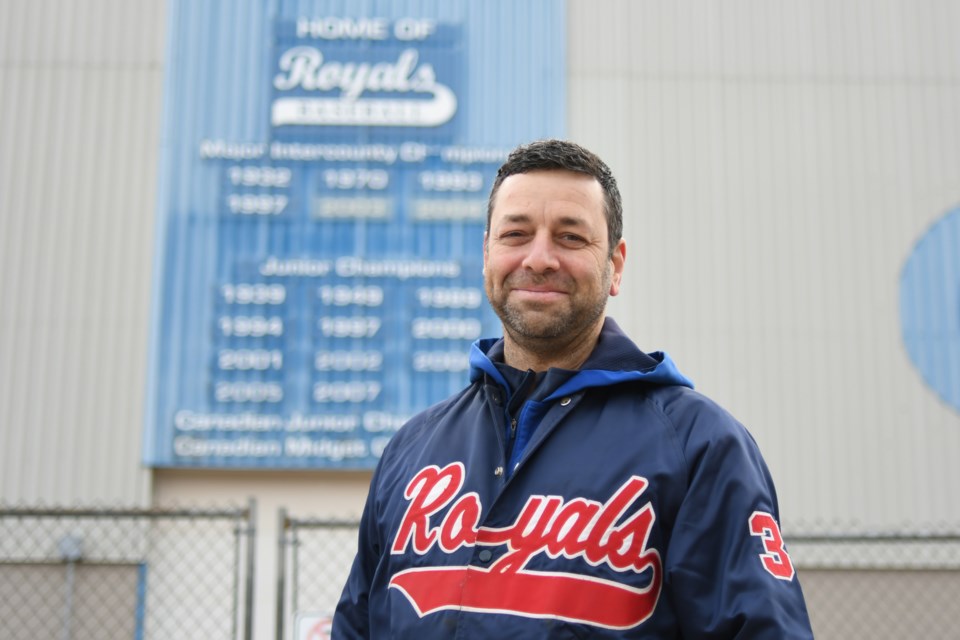 Dino Roumel is back as field manager of the Guelph Royals and he hopes to add another Intercounty Baseball League championship for the team. Rob Massey for GuelphToday

Dino Roumel, named field manager of the Guelph Royals last month, hopes to be sitting in the dugout in late August next year watching the players on the team jump up and down like little kids after winning the Intercounty Baseball League championship.

“I’m here because I want for us to be successful,” Roumel will tell the players who are going to suit up for the Royals in the 2020 season. “I want to sit back when you guys are celebrating on the mound or celebrating at home plate when we win a championship and take it all in. I want us to do it all together.”

Roumel is back for a second stint as field manager of his hometown team. The first stint included a league title in 1993 that put an end to a 23-year championship drought. It’s now been 15 years since the Royals last won the league crown and they also haven’t been in the league final since then.

Roumel’s goal is to get the Royals their 10th title in league history and to do that he wants his team to be a close one.

“It’s going to show on the field because guys are going to hate letting each other down and you’ll get that little extra effort looking out for each other,” he said. “You don’t have to fight, but you fight for each other. I know there are a lot of cliches there, but the thing is I truly believe it.

“The talent level between teams is so close that it comes down to a lot of intangible things.”

And the 2020 season might just be the right time for a team to come in and dethrone the Barrie Baycats, reigning champions and winners of six consecutive league titles. And the Baycats took over from the Brantford Red Sox who had also won six in a row.

“It’s going to be a really interesting situation in the league the way I see it right now,” Roumel said. “The way that Hamilton came on (last season). The way that Welland came on. Toronto is a team that’s always going to be competitive offensively, especially in that ball park.

“This league is so wide open. It’s going to be a fun summer and a fun league to be around.”

And there’ve been coaching changes in the league, too. Roumel replaces Dave teBoekhorst as field manager of the Royals while Kitchener and Barrie will also have different field managers next summer.

For the Royals to be successful, he wants them to have the same feel they did back in his first stint here. He also wants more spectators at Hastings Stadium, but knows that will happen only if the team performs well.

“Back in the 90’s, and I sound like an old man now, back when I was managing here the first time I thought that Baseball In Guelph did such a good job of reaching out. I remember seeing lawn chairs five deep at 1 o’clock in the afternoon for a 7 o’clock game. That was unbelievable and I think we can achieve that again because this is a great baseball city,” he said.

“There’s just a new energy here. There’s just a new vibe here. It’s so optimistic. We’ve had players around the league that have stepped away from the game that have contacted us and said that maybe (they’re) interested in coming back and if (they’re) available. (They’d) love to come to Guelph just because of the environment here and the community here.”

But he also knows the league is different from what it was in the ’90’s.

“The quality of baseball (in the Intercounty league) is the equivalent of a lot of minor league baseball. The only difference is the consistency of the pitching and you’re getting that now and guys are still hitting,” he said. “Guys are still hitting 90 mph (pitching) because they’re seeing it more routinely. It’s just that you’re seeing guys that are ex-pro guys at high levels and it’s fun to watch. Games are quicker. Guys are throwing strikes and you’re getting a lot more of those games that managers like – 3-2, 4-3 games instead of back in the day when we had the 15-6, 15-5, 15-10 games and you’d be there for four hours. Now it’s entertaining.”

He also has a message for any player he’ll manage with the Royals.

“I also want to tell them I have great memories here, so don’t screw it up,” he said. “Don’t give me any bad ones.”

However, he does have bad memories from his coaching days with the Royals.

Back in 1994 when the Royals were the defending champions they met the Stratford Hillers in the best-of-seven final. It went the seven-game limit and the Royals were ahead going into the bottom of the ninth, but Stratford rallied to claim the title.

“It’s something I’ve never really forgotten and people still talk about it,” he said. “They just got on such a roll. I looked down the bench and we had nobody who could come in. We played seven games in seven days and we just ran out of gas. I just remember that it was the most devastated I’d ever been in sports. I was inconsolable after the game.

“To win any kind of championship, you’re the best at what you do and when you’re that close and you’ve worked that hard and developed that kind of relationship with everybody, to see how devastated everybody was, it was hard. You don’t get over that.”

While that’s part of baseball folklore in the Royal City, it’s a memory Roumel doesn’t want repeated. And he wants Guelphites to embrace the Royals.

“The goal is to put the best possible product on (the field) and if we entertain people and are successful, which I fully expect to be, I think you’ll see people rallying around us,” he said. “We used to have 2,000 people for games here and it was because we were winning and people related to a lot of the people that were on the field. The fans related to the people that were on the field and it was our community team.

“If we’re losing and it’s four-hour games, if you want to be alone with your girlfriend, then take her to the ball game because there isn’t going to be anybody here except for a few parents and girlfriends.”

Looking at the roster from the 2019 season, Roumel expects there’ll be a lot of new faces here next summer. But he also expects the team to be heavy on local players and players who don’t have much longer than a half-hour drive to get to the ballpark.

“I want them to have the enthusiasm of a T-baller, but act like a professional,” he said. “I like to think that I’m a players’ manager. I treat everybody like they’re a man. I’m not going to be a guy who comes and berates you and pounds my fist up and down and yells at you and embarrasses you. If there’s an issue, you and I will talk one-on-one. I think my strength is my ability to communicate. I’ll be up front with guys, I always have been.”

And he hopes to watch them celebrate another IBL championship.

“You’ve got to come to play every day, which is going to be a lot of fun. I’m fired up. I’m so excited about it.”

COVID-19 sends Guelph karate champion back to the basics
Jun 22, 2020 10:30 AM
Comments
We welcome your feedback and encourage you to share your thoughts. We ask that you be respectful of others and their points of view, refrain from personal attacks and stay on topic. To learn about our commenting policies and how we moderate, please read our Community Guidelines.