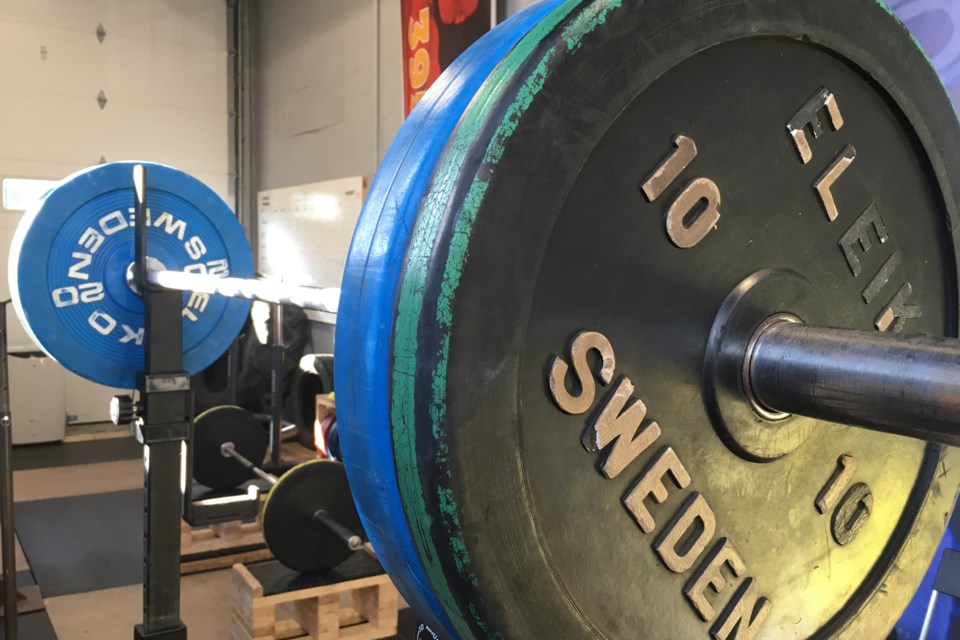 The Vault Barbell Club of Guelph is to host the Richard Borden Memorial regional Olympic weightlifting championships Saturday at the Delta Hotel. There are plenty of safety precautions necessary during the coronavirus pandemic for the event to go on. Submitted Photo

Hosting an athletic competition during a pandemic can add quite a bit of time onto both the set-up time for the event and the actual competition.

These are things that Guelph’s Vault Barbell Club’s Trevor Cottrell knows quite well. He’s the convenor for the Richard Borden Memorial regional Olympic weightlifting competition that is to be hosted by VBC Saturday at the Delta Hotel.

The meet has an entry list of just over 50 and is expected to take 11 hours to complete and that’s about four hours longer than a pre-COVID meet would have taken.

“The one side is a warm-up area and our sessions are capped at 12 competitors and there can be one coach per competitor so that's 24,” Cottrell said. “Usually at a meet, between 12 competitors you'll have four warm-up areas and they share them. Well, you can't do that anymore so everybody gets their own warm-up area. Now instead of bringing in four sets of Olympic weightlifting stuff, I have to bring in 12 and spread them out with three metres between each platform. You can have two people on each platform, the athlete and the coach, and the coach obviously has to wear a mask.”

The attendance in the room will also include five meet volunteers bringing the total in that side of the room to 29, easily under the 50.

“On the competition side, we actually ended up capping it at 20 spectators and at any one time probably six officials and then you'll have the athletes coming in and out with their coach and you'll have a couple of volunteers,” Cottrell said. “So there'll probably be about 35 on that side. That's the way it will work out give or take the way the volunteers are coming and going. It's well within the limits.”

The competition area will also be a safe area.

“The beauty of Olympic weightlifting is that you're by yourself on the platform,” Cottrell said. “The actual competition platform is four metres by four metres so if you're in the middle of that platform you're still quite a distance away from anybody. The referee's maybe the next closest and they're three metres in front of the platform and they're spread out to each side of the platform. It's pretty easy to do it, it's just for me logistically to set everything up takes a significant chunk of time more.”

The meet will also have a very detailed check-in and screening process that everybody has to go through.

“In some meets you can wander in and out. This meet is obviously very restricted,” Cottrell said.

The club is also considering the meet as a rehearsal for possibly hosting the provincial championships. They were to be held in Toronto Dec. 5 and 6, but a shutdown there will make that impossible. The Ontario Weightlifting Association requires an area to be open for 21 days before it’ll host an event in that area.

“That's what we're basically looking at, a dry run. We're all boots on the ground,” Cottrell said. “Some of our athletes in Ontario are going to be competing at the Olympic Games next year assuming it goes so they have to get their qualifying lifts in and they have to get their carding and all that kind of thing.”

The host club is also expecting the meet to be a successful one for its competitors. They have 15 entered including four in the junior classes and several in the masters classes.

“A lot of these junior competitors are St. James football guys,” Cottrell said. “Football's been cancelled so they're hitting the weights instead of hitting football.”

“The barbell club, we have one of the strongest masters programs in Canada. We had five gold medals at the last Masters Nationals coming out of our club. We have probably 14 masters lifters,” Trevor Cottrell said. “Not all of them, but a lot of them will be there.”

The reopening of the club during the summer and this competition are things that are good for the mentality of the competitors.

“The health benefits of it are so tremendous,” Trevor Cottrell said. “The neat thing about Olympic weightlifting is that mentally, it's a very challenging sport. When you achieve that sense of satisfaction, it's really inspiring to an individual. When they lost that, a lot of our athletes were quite down in the dumps when everything was shut down March through June. This really helps them get through it and I'm happy about that.”

That the meet is called the Richard Borden Memorial is a little different as he was a member of the U.S. weightlifting association, but he was extremely important to Trevor Cottrell, especially when Cottrell was a graduate student at first Northern Arizona University and then at the University of Arizona.

“Richard Borden dedicated almost his entire life to the sport of Olympic weightlifting. He was my mentor. I was in the U.S. for eight years as a graduate student and everything that I learned and I coach was basically learned from him. This fellow for 50 years of his life, starting in the early- to mid-1960s, developed Olympic weightlifters and other competitive athletes and dedicated 15 to 20 hours a week to it for free.

“He never asked for a penny from anybody and in fact with me he paid my way for a lot of events. He helped feed me and everything else. I was a starving grad student. He was one of the first people to be an international level coach and an international level referee with the United States Weightlifting Association. A lot of the Canadian officials who have been around for a while, and we have a lot of older ones, have refereed with him at world level events and know him quite well.

With a minimum of spectators and expenses incurred putting on the event, VBC isn’t expecting to make a profit.

“The club will probably take a bit of a loss, but whatever,” Trevor Cottrell said. “It's OK. It's worth it just getting a contest going.”