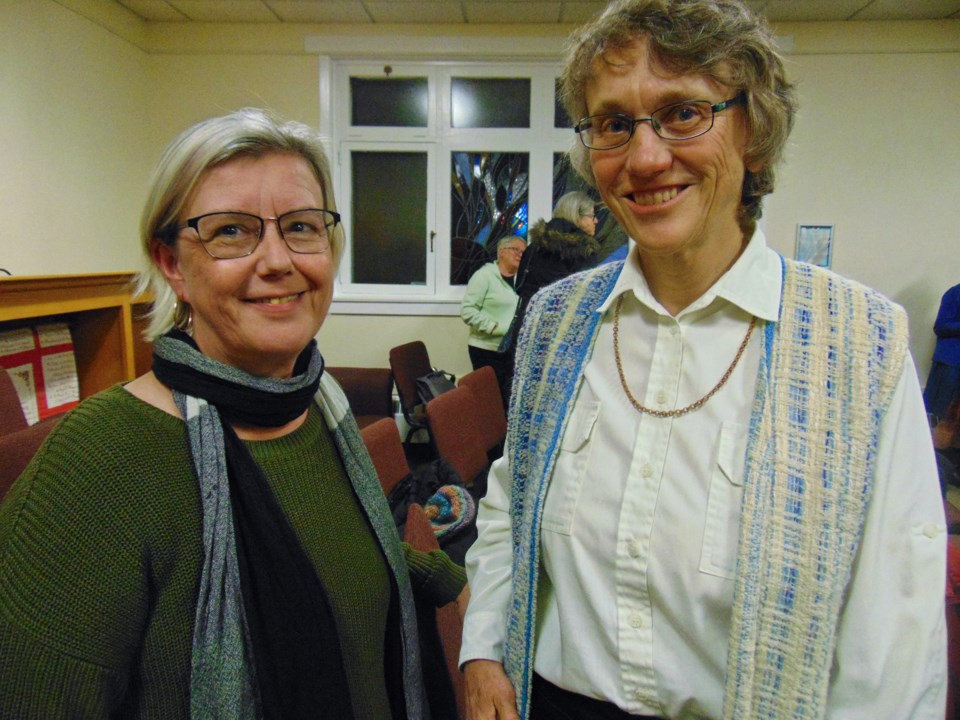 They see themselves as keepers of the water.

And for the Mississaugas of the Credit First Nation, water continues to play a significant role in their identity.

“They settled mostly at the mouths of rivers and because of this, they signed many treaties,” said historian Alison Norman, who recently presented First Nation treaty history at Dublin Street United Church as part of a free public series, “We Are all Treaty People”.

“Ontario is covered in treaties and this is what makes it so unique,” Norman said.

This was the second of a three-part series, sponsored by Dublin’s Justice and Outreach Committee, in celebration of Treaty Recognition Week which is held every November.

As a Justice and Outreach Committee, we try "to seek justice" which is part of
the United Church Creed,” says committee chairperson, Elizabeth Snell.

“Canadians are increasingly realizing the number of injustices imposed on Indigenous peoples both historically and currently, including by churches. We feel that a way forward is to build respectful relationships by meeting with and listening to our Indigenous neighbours, by learning more about our historical relationships and given our ecological crisis, by appreciating Indigenous insights into honouring the land. We want to offer the opportunity to the Guelph community to share in that listening and learning.”

Introduced in 2016, Treaty Recognition Week honours the importance of treaties in educating citizens about treaty rights and relationships.

And Ontario, is covered with over 46 treaties.

“Treaty history is so important especially in Ontario, and this helps bring awareness between those involved in treaty relationships. This is a great opportunity between indigenous and non-indigenous people, to come together and to learn,” Norman said.

Norman, a research associate at the Frost Centre for Canadian Studies and Indigenous Studies at Trent University says that most of her knowledge comes from archives but also, from the communities themselves.

“It’s so important to visit these communities. Everyone should take the opportunity to visit and they want you to come and learn,” she said.

It was once a respected trading nation with the Europeans in and around an area which included Port Credit and the City now known as Toronto.

Today, it occupies abut 6,000 acres of land in the townships of Oneida and Tuscarora, just off Highway # 6 near Hagersville, approximately one hour southwest of their original home located on the banks of the Credit River.

The MCFN belong to the Anishinabe Nation, North America’s second largest and is part of the Three Fires Confederacy, an alliance of the Ojibway, Odawa, and Potowatomi Nations.

“Historically, there weren’t a lot of them, but they had a huge territory,” Norman said.

“They were different in that they used various sites seasonally. The fact that they constantly moved around is so important and they did mostly settle at the mouths of rivers,” Norman said.

Their name, in the Anishinaabemowin language is “Missisakis” meaning “many river mouths.”

According to the Mississaugas, when the French arrived in Canada, the Anishnaabe were living along the shores of Lakes Huron, and Lake Superior. Furs were traded with the French in exchange for European goods.

By 1700, they conquered most of Southern Ontario.

The Mississaugas remained in the Lake Huron and Georgian Bay areas and the band from the Mississagi River began to drift towards the southeast section of Upper Canada.

Despite the promise of early treaties and the mutually respectful partnerships established, Indigenous peoples were targeted by colonial policies designed to exploit, assimilate and eradicate them.

“The British wanted them separated and on reserves. They didn’t want them travelling and doing their rounds which the Mississaugas did. They wanted them to be Christian and to rely on agriculture rather than fishing and hunting,” Norman said.

“It’s a tragedy, but they were resilient in trying to hold on to their history, language and traditions.”

The Mississaugas signed multiple treaties including the Treaty of Niagara in 1764.

The Toronto Purchase was signed in 1805 and the largest treaty that differs from all the rest, is the Between the Lakes Treaty 3.

The arrival of Loyalists during and after the American Revolutionary War placed pressure on the British Crown to find lands on which to settle the newcomers and among the Loyalists, were about 2000 members of the Six Nations who had lost their homes fighting on behalf of the Crown.

The Mississaugas of the Credit ceded to the Crown approximately 3 000 000 acres of land located between Lakes Huron, Ontario, and Erie.

Within the boundaries of the Between the Lakes Purchase are, Hamilton, Cambridge, Waterloo, Guelph, Brantford, and St. Catharines.

The present location of the Mississaugas of the Credit First Nation Reserve is located on Between the Lakes Purchase lands.

On Nov. 21, at 7 pm, Margaret Sault an elder of Mississaugas of the Credit, will speak at the last session of the series at Dublin United Church.

As director of lands, research and the membership department, she will share the history of the nation and offer insight into the joint responsibilities as treaty people of the Between the Lakes Treaty 3.

“To know them, we need to visit with them,” Norman said.

“We owe it to them to learn and know of their story.”

Preserving The Priory wasn’t a priority
Mar 30, 2020 7:00 AM
Comments
We welcome your feedback and encourage you to share your thoughts on this story. We ask that you be respectful of others and their points of view, refrain from personal attacks and stay on topic. To learn about our commenting policies and how we moderate, please read our Community Guidelines.