To Guelph residents, 65 Forbes Avenue may not be as iconic an address as 24 Sussex Drive, 1600 Pennsylvania Avenue or even 1313 Mockingbird Lane. But to potential homeowners who might appreciate the time-worn peacefulness of the streets lining the city’s Old University area, this picturesque century home has the potential to become a beloved residence to whoever is responsible for the next “sold” sign landing on the lawn.

Sitting alongside the primary farmhouse on lands that eventually evolved into the current neighbourhood, this home belongs to one of the prettiest and most exclusive streets in Guelph – in fact, it’s rare to see such a house up for sale, and it’s easy to see why.

The master bedroom alone is a prime selling feature, sitting as it does in the converted attic space and offering a splendid panoramic view of an acre of verdant forest area. That kind of view is hard to find in a downtown property, and it’s a major reason why people who move here tend to stay here. That, and the fact a 10-minute walk in one direction gets you downtown, and 10 minutes in the opposite direction gets you to the rustic paths that crisscross the Guelph University campus.

Current owners have done their best to maintain the historical character of the house while adding the modern amenities expected in such a grand property.

New bathrooms, a new kitchen and loads of upgrades have helped transform this unique property into a happy hybrid of old and new. There are still signs of the past, however, including a charming basement, which years ago was wired as a movie projection theatre that often-welcomed members of the local amateur film association.

A solid brick wall running through the basement likely contributed significantly to the house holding its structure for over a century. Even the garage has its own story; what once housed a Model T now contains an odd-shaped addition, added years ago to reflect the increasingly large size of the former owner’s cars. 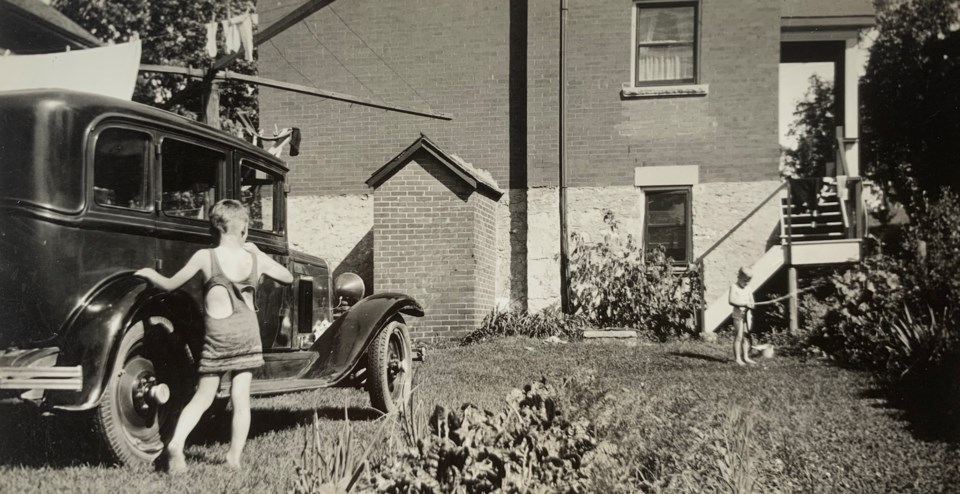 A vintage view of 65 Forbes Ave.
The amenities are what make 65 Forbes Avenue live up to the Forbes name.
When the attic was converted, many vintage elements like antique doors and hand-hewn wood were incorporated into the design. The master bedroom room – one of four bedrooms in all – features a vaulted ceiling with an exposed beam for added charm. The house contains all the original baseboards, doors, woodwork and plaster ceiling; a glorious oak stairway featuring a U-split design makes for a wonderful 16-step journey into the heart of the home. Finally, a brick exterior constructed of locally sourced bricks adds an air of distinction to this beautiful home.