If you appreciate fine details and old-world craftsmanship, there is a historic home in Guelph that should be on your shortlist to consider.

27 Barber Avenue is a stately Victorian mansion, done in the French Second Empire Mansardic style. It’s completely unique for several reasons, just one of which is that it’s all stone, from the foundation to the roof. The house is made of natural hand cut limestone quarried right here in Guelph. The walls are two-feet thick.

The home was built for J.D. Williamson, the proprietor of a very successful department store downtown called The Golden Lion. Williamson spared no expense in the construction and wanted only the best of the very best for his new home. The two carved stone lions guarding the front steps are a lasting tribute to his store.

Throughout this centre hall floor plan home, you’ll find intricate detailed black walnut woodwork, 3-foot-high wainscotting, 18” baseboards and a magnificent winding 3 storey staircase. The ceiling height is an impressive 13 ft on the main and second levels, and 11 ft on the third. Even the ceilings themselves are masterful, full of intricate plaster mouldings. You’ll also find etched stained-glass windows and solid walnut wood doors, each with engraved bronze hinges and hardware.

This 8 bedroom nearly 8,500 sq ft home also just happens to sit on a large mature treed  park-like 0.83 acre piece of property on one of the nicest upscale private streets of Guelph. The two limestone gateposts at the end of Barber Avenue once marked the entrance to the home’s private driveway.

Exhibition Park, a few minute stroll away, was the site of the old exhibition grounds, the popular farm fair which would later move to Toronto. The downtown neighbourhood is mature, safe and full of history. It has unique architecture, large trees and lots of green space for families to enjoy together. Lieutenant-Colonel John McCrae (the poet of In Flanders Fields) attended Guelph Collegiate Vocational Institute, a well-regarded local high school just down the road.

There’s a host of amenities nearby. Downtown Guelph with all of its shops, boutiques, restaurants and movie theatres is just a short 20-minute walk away. You’re close to schools, The Bookshelf, the main branch of the Guelph Public Library and the River Run Centre where the Guelph Storm hockey team plays.

Perhaps the most charming detail?

The house even has its own name: IDYLWYLD. Completed in 1880, it was one of the original homes in the area. Barber Avenue was previously the laneway leading up to this house, as the massive estate property was originally comprised of 13 acres. There was a stone carriage house that stood behind it (which has since been converted into a home) and an adjacent brick cottage built earlier around 1850 that was also originally part of the 13 acre property. 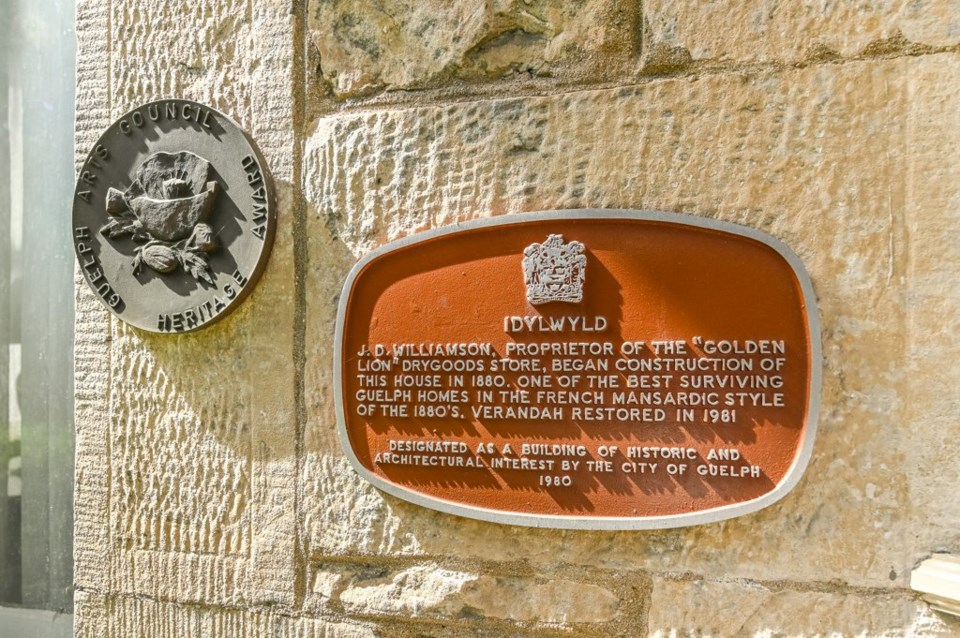 The ideal buyer for this home is definitely someone who likes history and appreciates bygone architecture and craftsmanship. There are details in this house that just couldn’t be replicated these days; no one would take the time or have the money to do it. The fireplaces are made of imported marble. All of the wood work and even the balusters going up the staircase were hand carved. Consider the 2 foot thick hand cut stone walls, the plasterwork detail on the ceilings—the house reportedly took over 4 years to build.

If this 18-room home with soaring ceilings and a tall corner tower speaks to you, you’re also likely to appreciate its designation as a building of historic architectural significance. Two plaques displayed at the front entrance serve as a reminder to visitors. One reads, in part, that Idylwyld is probably the best-preserved home of the 1880s and is a worthy example of its architectural style.

For more pics and information, view the listing, visit www.27BarberAve.com or call the listing real estate agent Rob Green at 519-993-8817.