Concerned residents are being encouraged to decorate their cars with plungers, fishing rods and toilet paper for a car rally protest on Saturday
Feb 16, 2021 7:00 AM By: Keegan Kozolanka 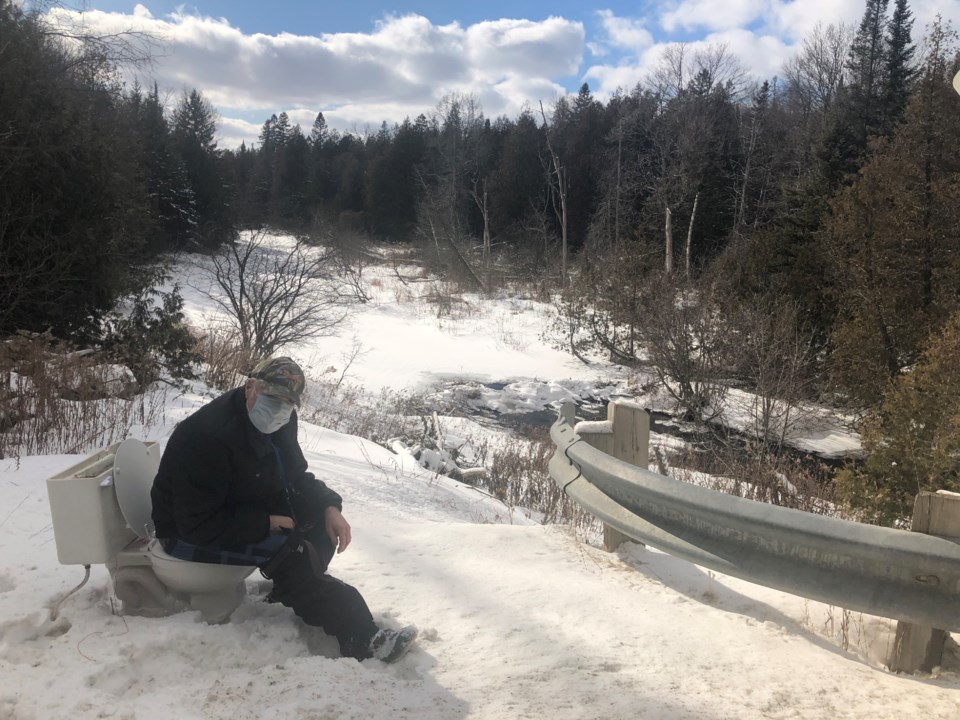 Erin resident Ken Cowling sits on a toilet to drive home what he thinks of the proposed effluent dumping site.Submitted photo

ERIN – The fight against Erin’s upcoming wastewater plant is gaining steam as area residents plan a car rally in protest.

On Saturday a car rally will start in the morning at the Erin Legion on Dundas Street and head to the proposed wastewater plant site at 10th Line and Wellington Road 52.

It will then loop back into town and then start all over until noon. Organizers estimate one loop will take about 15 minutes.

Ken Cowling, an organizer of the rally, said this is the better option than an outdoor rally because of COVID rules.

“Everybody can sit in the comfort of their cars with a coffee in their cup holder and they’re just going to drive-by,” Cowling said in a phone interview.

He mentioned there will be OPP presence as he called them to ensure the rally is in accordance with the law and proceeds in a safe way.

A press release from the rally encourages those joining in to decorate their cars with signs, plungers and toilet paper.

Cowling, a 71-year old who has lived in Erin for over 40 years, isn’t new to fighting the Erin wastewater plant.

He has been occasionally marching near where the treated sewage will be dumped into the West Credit River with a sandwich board sign that reads “Say No To This Sh-t Show” along with writing letters to local newspapers.

He's gone as far as bringing an old toilet to the site to really drive his message home.

The dumping site is a known brook trout spawning area which has raised concern from fishing organizations and residents but has been approved by applicable authorities.

“We’ve been sold down the river by the Credit Valley Conservation Authority, by the Ministry of the Environment...they’ve all signed off and they’ve all approved this is to put this sewage plant in,” Cowling said.

“I just can’t believe that these people, who claim they’re conservationists, are allowing this. It’s a total abomination.”

The $118 million wastewater plant is intended to get existing residents off a septic system and also accommodate for the projected growth in population and housing anticipated over the next decades.

Cowling said he thinks this will fundamentally change the small town feel. He said developers should be putting in their own wastewater systems in new developments.

“Why should we disrupt the whole town?” Cowling said. “Heaven forbid, you might have to allocate some space for wastewater and not put in the cookie-cutter homes because that’s what’s going in here. They’re going to turn us into Milton.”

He’s also concerned with what it might ultimately cost residents to hook-up to the system.

The Town of Erin wastewater webpage states that the exact cost to each household will be determined after grants are received but previous estimates put it around $10,000 to $20,000 each.

Cowling isn’t convinced it will be this low because he said older houses will be more complicated to hook-up.

Cowling has been out delivering signs for people’s lawns and he’s spent around $2,300 on them.

He said they will be collecting donations to pay for these signs and any additional raised beyond the cost will be donated to the Hillsburgh Special Friends Club.

They are also collecting for the food bank at the same time.

“Why not kill two birds with one stone? Come throw in a can of beans, a box of Kraft Dinner, throw in $20 into our donation box,” Cowling said, encouraging supporters.

Cowling said his passion comes from his desire to maintain the scenic areas in Erin he’s known all his life and to pass it on to the next generations.

“I just want to pass this legacy on to my kids and my grandkids, that’s my mission,” he said.

“My mission is to have my grandkids sit at the same streams I have for the past 70 years.”