On The Bookshelf: Whose Water Is It Anyway? 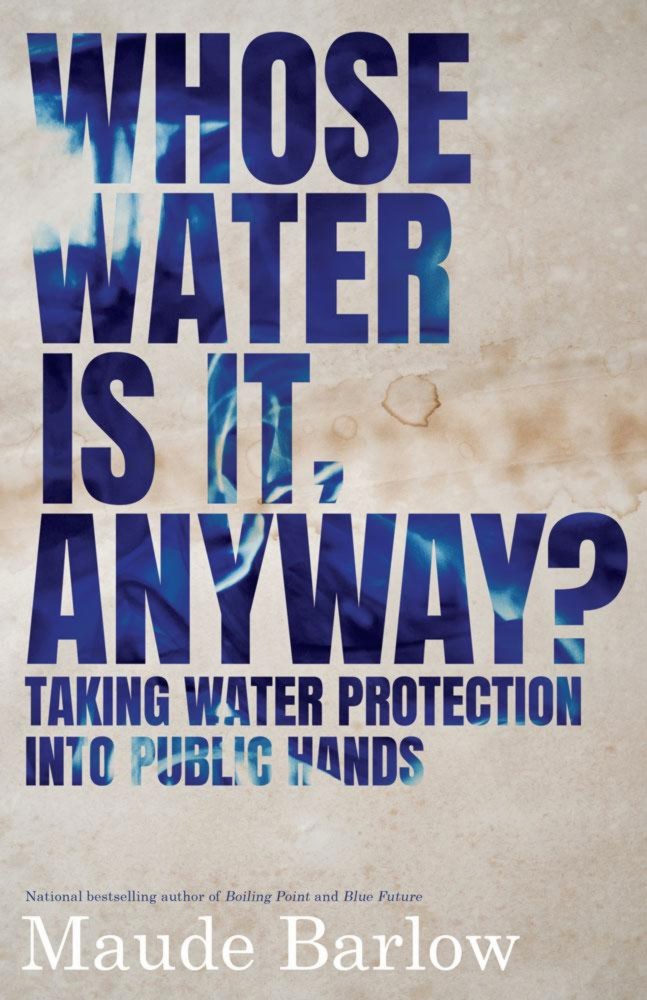 I am sometimes seized by the fear that the scenes of devastation conjured in dystopic novels, TV shows and movies will actually be our future.

The real pictures that we have seen of recent wildfire and hurricane catastrophe really do look like scenes from film sets. But pessimism and fear are not the way to change things and so we must be grateful to the many climate champions who are shouting out the biggest danger of our time.

One of our most effective heroines is Maude Barlow, honourary chair of the Council of Canadians. She, along with indigenous and grass roots groups around the world have been vocal water activists for years. Her most recent book, Whose Water Is It Anyway? gives shape to the many people around the world who expose corporate greed and government mismanagement and absolutely refuse to give up.

In 2008, Barlow was appointed the first UN ‘s first senior adviser on water issues and led the campaign to have water recognized as a human right. She has warned us over and over that public trust for water must not fall to the corporations who want to commodify it and let the free market decide.

Over two billion people drink feces contaminated water and women and girls suffer the most as they are the ones who access water daily for their families. Right now more than five billion people suffer serious water shortages. Privately owned corporations charged 5% more for drinking water services and 63 per cent more for sewage services. By now we are all aware of the water emergencies of Canada’s First Nations, Metis, and Inuit peoples. Grim findings to be sure.

But she does call this a book of hope. One of her beacons is called The Blue Communities Project, which was launched by C.U.P.E. and the Council of Canadians in 2009. The rules are simple. A municipality must recognize and protect water and sanitation as a human right. It must promote publicly financed owned and operated water and water services. Lastly, it must ban or phase out bottled water at municipal facilities and events. There are 27 municipalities in Canada (including Montreal) that are Blue Communities. Blue Communities has partnerships all over the world. Paris, France is one of those communities.

We are a very lucky community – although not a blue one yet – to have Maude Barlow speaking on Tuesday, Oct. 1, at 7 p.m. at Lakeside Hope House. She will give you years of insights about the hard won battles of grass roots activism and she will give you hope. Not only is she a tireless warrior but a great speaker!  Don’t miss this event organized by the Council of Canadians.

Uncanny Valley: An exploration of the lows found working in a young Silicon Valley
Feb 9, 2020 12:00 PM

On The Bookshelf: A local Anishinaabe elder Rene Meshake shares his spirit and soul in memoir
Dec 1, 2019 12:00 PM
Comments
We welcome your feedback and encourage you to share your thoughts. We ask that you be respectful of others and their points of view, refrain from personal attacks and stay on topic. To learn about our commenting policies and how we moderate, please read our Community Guidelines.