Traditional food gets a boost in southwestern Ontario

In this Urban Cowboy column, Owen Roberts writes how the “three sisters” fit into a new Indigenous food research effort at the University of Guelph

Food is said to bring people together – and in southwestern Ontario, that’s exactly what University of Guelph Prof. Hannah Tait Neufeld is hoping it will do for local Indigenous communities.

Tait Neufeld, a family relations and applied nutrition professor, has received support from the Canadian Institutes of Health Research for the study. The research funding will go towards documenting community examples -- in the form of images and stories -- to support and reinforce these practices across various locations.

She calls it “land-based education.” 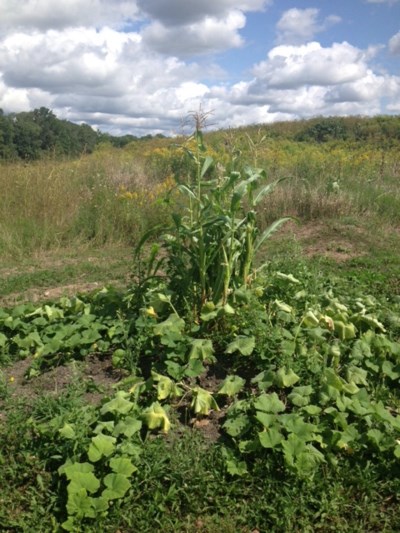 Mound garden
Tait Neufeld is teaming up with diverse research partners, including Adrianne Lickers Xavier and the Our Sustenance project in the community of Six Nations, as well as with Guelph-area urban food projects and with the University of Guelph campus community.

She’ll also work with Prof. Kim Anderson, whose research interests include the health and wellbeing of Indigenous families.

Traditional foods such as the “three sisters” (beans, corn and squash), as well as wild plants and meats are held in high esteem by Indigenous communities, for their holistic health benefits.

Research participant Xavier says the three sisters could keep a community healthy even in times of drought, or when animals for food were scarce.

“Being grown together, the three foods are ideal in a garden,” she says. “Their growth is actually enhanced by being together. They form a synergistic relationship. When cooked, they provide enough food to sustain a person.”

“Most pre-packaged store-bought foods tend to be processed, less healthy and expensive, and we’re eating too much of them,” she says. “In southwestern Ontario, Indigenous communities have expressed an interest in consuming more locally harvested foods.”

She says urban Indigenous families and youth frequently relocate to cities for work or school, and are also in need of support to reinforce the important relationship between food and local environments.

But her study’s not only related to increasing access to traditional foods. A significant portion will be dedicated to capturing images and stories to facilitate knowledge exchange.

For example, participants will take photos where foods are harvested, hunted or shared in the community of Six Nations and in nearby municipalities such as Kitchener-Waterloo and at the University of Guelph. She says the photos will become the objects of interviews and she and her research team will collect stories behind the images.

The photographs and digital stories will be displayed at local events to advocate for the continued relationship building, in support of land-based Indigenous food initiatives.

“Sharing practices, increasing food knowledge and access through increased social supports will contribute towards the health and wellbeing of individuals, Nations and Territories,” she says. “Food is a bridge, and when our research project is complete, I hope food has led the way for all of us to know each other better.”

Share your holiday photo for a chance to win a $200 gift card!

Is now a good time to buy real estate? Advice on when to get into the market

Discover a new dimension of solutions for rejuvenated and revitalized skin

How your Hy-Grade Steel roof is manufactured

How to spot a moving scam