Should the City share the load when it comes to snow business?

This week, Market Square considers if it's time again to open debate on whether the City of Guelph is taking on too much, and not doing enough, when it comes to residential snow removal
0
Feb 23, 2019 10:00 AM By: Adam A. Donaldson 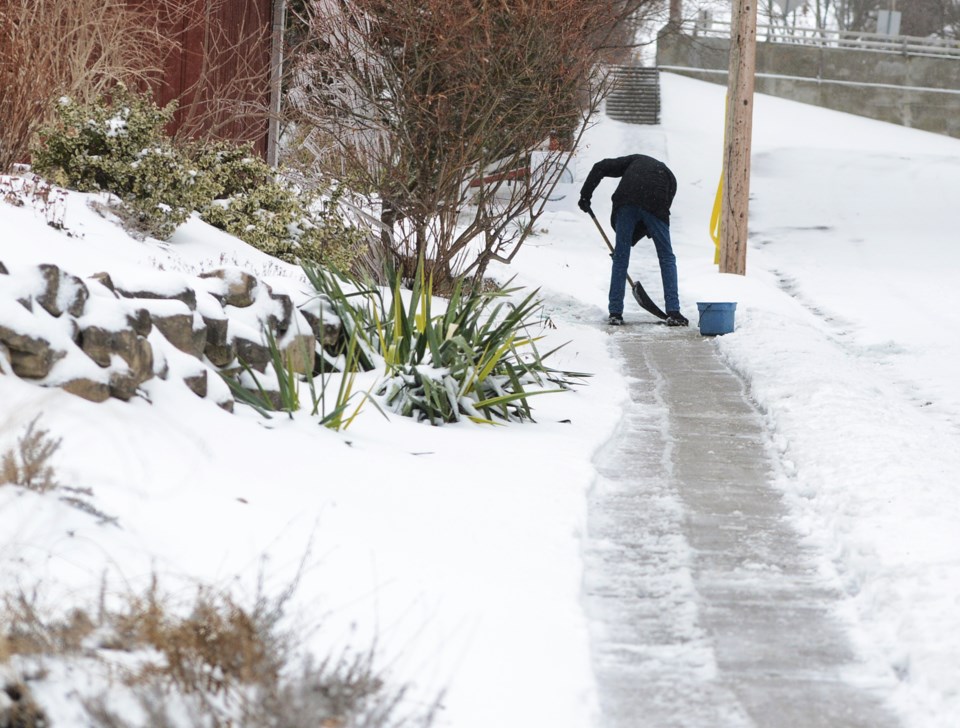 If you’ve been on social media lately, you might have noticed an underreported Guelph emergency: there’s been a run-on for road salt.

Supplies have evidently been short in the Royal City and a highly co-ordinated effort on the part of a couple of Facebook groups have assured that any Guelph shop that gets a shipment of road salt sells out in a matter of hours, if not minutes.

Guelphites, being a naturally highly caring community concerned for the safety of their neighbours, want to assure that no one falls on their bottom or breaks something by slipping on their sidewalks. But let’s be honest, this is mostly about the bottom line.

I quote a Guelph Reddit user that was forced to MacGyver a solution and use water softener salt when road salt supplies were unavailable: “It’s a simple calculation between having to amend my yard where it may get salt poisoning vs settling a lawsuit from a pedestrian or delivery agent wiping out on my property.”

Our overly litigious society has certainly prompted a hyper awareness about the constant threat of bodily harm, but I think it can also be said it’s stymied our broader society from just being better citizens.

As I’m writing this, I’m trying to find out why the City of Guelph takes on the responsibility to plow all 660 kilometres of sidewalk, 180 crosswalks, crossings, steps, walkways, and 590 bus stops itself without galvanizing citizens to help out with the effort. Does it have to do with the legal indemnity?

Thanks to a 2015 article in the Waterloo Region Record, I know that Guelph is not alone in this policy. London, Winnipeg, Ottawa, Fredericton, Montreal and Quebec City also plow all municipal sidewalks, as does Toronto, but apparently that doesn’t include the downtown core where the obstacle course of garbage cans, signs, and displays makes things trickier.

I also know that Waterloo Region puts the responsibility for residential snow and ice removal on its citizens, and there are consequences if you don’t mind your civic duty.

“If a sidewalk is not cleared of snow and ice a bylaw officer will leave a one-time notice at the property and return within 24 hours. If the sidewalk has still not been adequately cleared, the city will clear it and the property owner will be invoice approximately $400,” says the City of Kitchener website.

Of course, this model is hardly universally beloved either, but Kitchener offers options to assist. There’s a program to help 10 neighbourhoods every year buy a neighbourhood snow blower, and there are snow removal assistance programs through the Working Centre, Community Support Connections and others to help people with mobility issues and seniors.

But regardless of the means, I think what’s clear is that the vast majority of municipalities still rally the elbow grease of residents and homeowners to help keep city sidewalks free of ice and snow. Why doesn’t Guelph?

The other social media trend of the last week has been places where the residential snow removal has failed. Sidewalks that remain uncleared, bus stops where piles of snow prevent people with strollers or mobility devices from getting on and off the bus, and if the snow is clear, there’s a chance you can’t say the same about the ice.

The city has explicitly taken on responsibility for handling these things, which makes it harder to appeal to people and say, “Hey, help us out.” I mean, it’s not like the city asks us to help mow the grass in public parks or fill in for bus drivers who are out sick. The city takes on a responsibility, and we expect them to fulfill it.

But the city’s own wholistic snow removal service seems to be the exception rather than the rule, and even as we currently wind down the current budget process, it’s been a long time since the idea’s been raised around the horseshoe that perhaps the responsibility for clearing all 660 km of sidewalk is biting off more than it could, or should, chew.

On top of that, the city is planning to add more to that load. Not just the expected residential growth and development in Clair/Maltby, but in the kilometres of new paved trails that the City of Guelph wants to create for active transportation. The city will soon be responsible for 700, and maybe 800 km of sidewalks and trails, along with all those crosswalks and bus stops.

What’s clear is that Guelph is safety conscious if for no other reason than guarding their equity. And I will acknowledge that there are people out there that do, of their own volition, clear the city sidewalks in front of their homes.

Somewhere between fining people for not doing the job, and leaving it all on the backs of city workers, perhaps there’s a way we can all start working together to keep our sidewalks more walkable.

And next year, order more salt everyone.