Story Behind the Story: Our visit to Guelph General Hospital's ICU 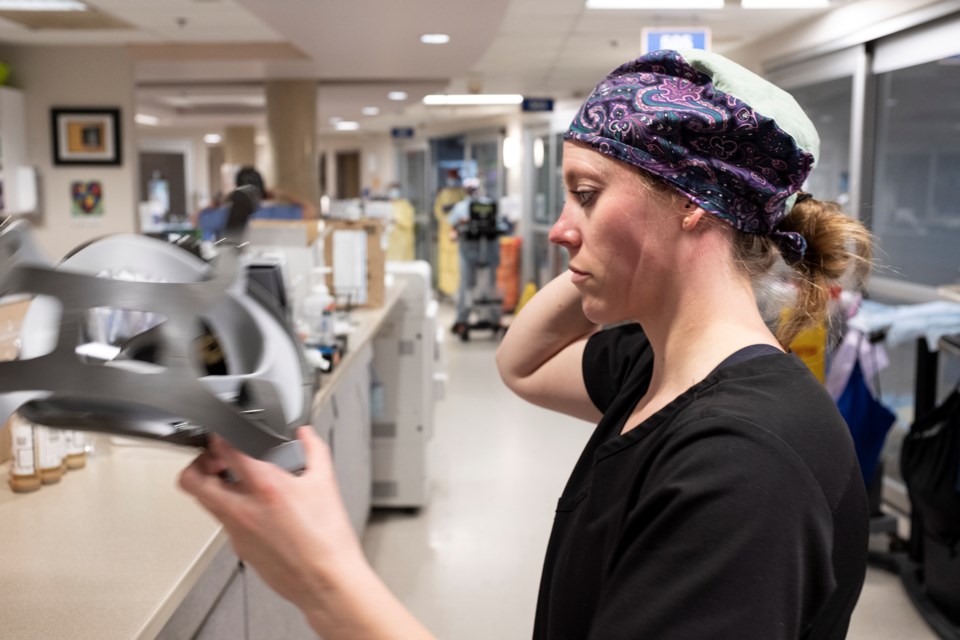 Educator RN Jaclyn Van Der Kraak removes her respirator mask after about an hour in a room with a COVID-positive patient. Kenneth Armstrong/GuelphToday file photo

GuelphToday's Kenneth Armstrong discusses his visit to the Intensive Care Unit (ICU) of Guelph General Hospital, one of the most viewed stories in GuelphToday's history.

Last week’s look inside the ICU at Guelph General Hospital was months in the making, with everything coming together in only the final days.

At GuelphToday we post the daily case counts and cover the various meetings and reports throughout the last year, but it’s rare for us to be able to cover the toll this collective effort is taking on those at the very front of the front lines.

On Feb. 1 I made my first pitch to the hospital president to be allowed inside the ICU to cover what was going on. I was surprised to receive an enthusiastic response and over the past few months involved working with the communications team at GGH, who I am sure were working in the background to determine what kind of permissions were needed.

I made my last pitch to them a few weeks ago, after I covered an anti-lockdown rally downtown. One of the men there didn’t appreciate my previous coverage of those rallies and told me to go to the ‘empty hospital’ to report on the real story.

That just made me want to share the stories of the staff inside the ICU even more.

When people ask me about my experience going inside the ICU the question I am asked most often is about the personal protective equipment I was wearing.

Leading up to the assignment I wondered the same thing. I imagined I would be wearing a full protective suit or maybe a high tech respirator mask or at the very least an N95 protective mask.

You can imagine my surprise when the hospital offered me a paper surgical mask and disposable goggles as the only protection while inside an area of the hospital that at the time had a half a dozen confirmed COVID cases.

My mind was set at ease somewhat when one hospital staffer who was coming in with me wearing the same PPE offered the following advice. He told me the only difference between inside the ICU and outside is there is no doubt that COVID is present past those doors.

“You already know the rules,” he told me.

That meant don’t take off your mask, don’t touch your face and sanitize your hands as often as possible.

I don’t bring this up because I think it’s particularly noteworthy that I went in wearing only a paper mask — hospital staff do it every day — but I do think it highlights following the same public health guidelines given from early in the pandemic seems to have been effective for me, even in an environment known to have COVID inside it.

I’d be lying if I said I wasn’t watching myself closely for symptoms in the days following the assignment, but over a week later and I haven’t had any issues. I think this is a testament to the staff at Guelph General Hospital and the effective measures they have put in place to keep the risk of COVID-19 spread to a minimum.

The tour lasted about three hours and involved interviewing various ICU staff as time permitted. Photographs are not allowed to be taken in the ICU but special permission was granted to me with consent from all working staff and an assurance the privacy and dignity of patients would not be violated.

The staff members I spoke to shared their stories of burnout and the stresses of the job and many of them said those issues follow them home at the end of their shifts. The stories of personal sacrifice have stayed with me a week later, as much as the sights and sounds of the patients on ventilators.

There has been a disappointing response from a very small minority of people, usually anonymous online, who have called the story and photos staged.

Even if you are someone who doesn’t believe that the pandemic is real or that it is being exaggerated, it’s difficult for me to understand how some people are not capable of basic empathy when reading about real people sharing their experiences and the toll it has taken on them personally.

The Whole Story: U of G student student talks about her waffle delivery business (VIDEO)
May 5, 2021 7:00 PM

New and improved GuelphToday poll shows most support eight wards with one full-time councillor
Apr 23, 2021 8:00 AM