Mercy Traveller: The four horsemen of the apocalypse are still napping

Seeing the joy of life, even in the midst of chaos, helps put everything in perspective
Philip Maher Aug 6, 2016 12:00 PM

Back in the ’80s I had a summer job at a radio station. After ending the newscast, which reported the craziness of world events, the news reader would turn off his microphone get up from his chair and say to me, “The world has gone completely mad.”

Fast forward a few years and I was working in post-genocide Rwanda. One woman recalling the atrocities said, “We thought the world had ended.”

Given the events of 2016 we might also say, the world has gone mad and the end is near — racial killings in the U.S., a bevy of suicide attacks in Europe and the Middle East, a coup in Turkey, fires in Alberta, state-sponsored doping, Brexit, Syrian refugees, Donald and Hillary, and a host of other crises. It’s hard to imagine what’s next for the world.

Do you feel like we are in a continuous loop, lurching from one frightening catastrophe to the next? We appear to be living in dangerous times.

But have we ever not lived in dangerous times? When it comes to recalling troubling world events, we often seem to have amnesia and deja vu at the same time.

Surely my parents who lived though World War II must have felt that the world had ended. My mother fled from England to Canada for safety. My father shifted from the land down under, partly as a result of the war. We survived the Soviet threat, the Bay of Pigs, the Chernobyl meltdown and more recently the wars in Vietnam, Bosnia, Somalia, Rwanda, Burundi and Cambodia. We could fill a page with the craziness of even the last 10 years. 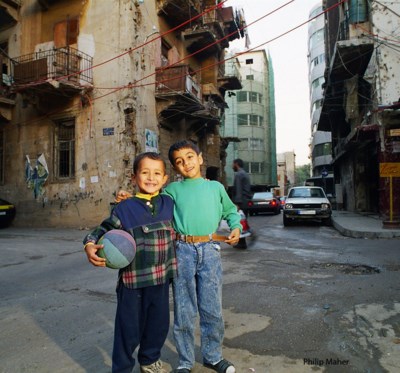 Boys play enjoy soccer in a bombed out suburb of Beirut, Lebanon. Photo by Philip Maher for GuelphToday.

Each crisis has its own flavour. Each is unique. This newness makes it feel worse than before. It is a natural tendency, and I suppose each generation’s prerogative to think that they are the most important and most well informed.

As an aid worker I’ve been to numerous areas of conflict. Maybe I have always seen the world as a dangerous place and perhaps it’s only a bit more dangerous now. Just as in the past, some truly horrible things are taking place now. In Somalia there has not been a functioning government in 20 years. Living in that region is like living in a Mad Max movie. Failed states are not new.

I am not suggesting that we shake off the pain of the world like a dog shakes off water from a dive into a cold lake. Let us do all we can to reach out and save this spinning globe. Let us have compassion for those in pain. But also, let’s remember to enjoy life. I vividly recall meeting some boys playing soccer in the midst of the bombed rubble of a Beirut suburb some 20 years ago. I thought to myself, “if only we could see the joy of life, even in the midst of the chaos.”  It helps put it all in perspective.

The world has ended for folks who have lost homes in Syria or for others caught in poverty.  This is horrific. Is the world a more horrible place in general? You may feel that way. The media proliferation sure promotes that notion.  But, is it worse than during the first or second world wars, or the cold war? The problem with fear is that when you put it in a Mixmaster, add in some desperation and cynicism, you end up with a drink called Donald Trump.

So my friends, remain calm. Step away from the edge. All is not lost. Help the needy, donate to a charity, hug your kids. And to paraphrase Pierre Elliott Trudeau: Don’t listen to the news before you go to bed. It’ll help you sleep at night.