Guelph Storm's first half in one word: shocking 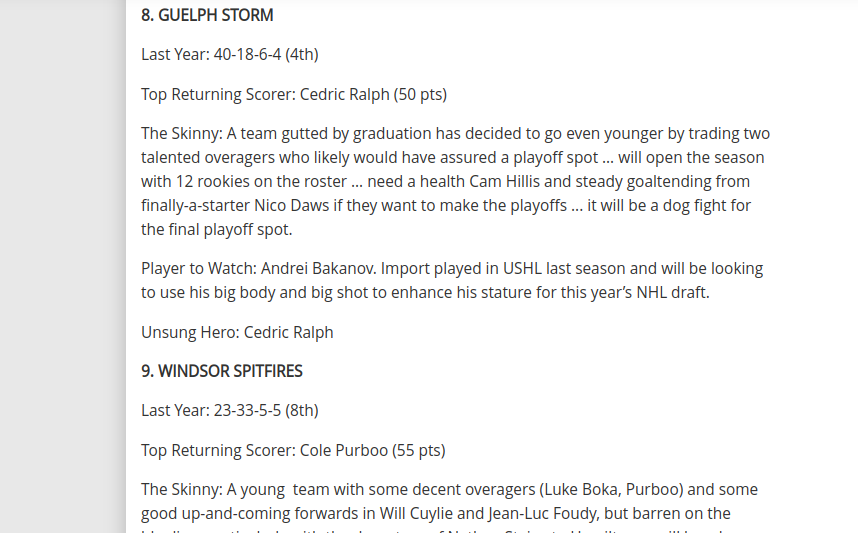 Saxon On The Storm's pre-season prediction on how the Guelph Storm would finish.

At least I'm not the only one that doesn't know what they're talking about.

The Guelph Storm has been the surprise of the first half of the OHL season.

In September I had them to finish in eighth place this season, squaking into the playoffs ahead of the Windsor Spitfires, who with a win over Sarnia tonight can join the Storm with a share of first place.

People said eighth was too high.

Several other media members with indepth knowledge of the OHL had Guelph finishing last.

But here they sit, 42 points at the break, tied for first. One point more than they had last year at this time in two fewer games.

Yes, it's a precarious perch. They are only eight points, or two bad weekends, away from being out of the playoffs. Such is the current scenario in the Western Conference, where as of Friday just 11 points separate first from last.

How have they done it?

Simple really. Nico Daws has been unbelievable and the teams older players have been their best players. Throw in the emergence of Daniil Chayka (who at 17 might be the team's best defenceman), good team discipline and great penalty killing and you have a team that has been in almost every game it's played.

Of Guelph's 12 losses, eight of them have been by one or two goals.

The younger players are playing a lot and there is a lot of potential, if not much scoring, shown in that group. The good thing is that with the play of Daws, Gogolev, Hillis et al there hasn't been much pressure to get production from the team's third and fourth lines. Good job, because there hasn't been much.

Only four players have hit double digits in goals and more scoring was (is) expected from Eric Uba, Andrei Bakanov and Jacob Roach. That will likely still happen in the second half, given that two of those three are rookies in the league, albeit older rookies.

Despite going 6-4 in its last 10 games, there no reason to doubt that once the team gets all its players back, most notably Daws, that it can contine to play at the level it has for most of the first 31 games of the season. Why wouldn't it?

But there is one day on the calendar that could change all that: Jan. 10. OHL trade deadline day.

It is highly unlikely the Storm will be a buyer. The team just isn't old enough, or deep enough, overall to compete with teams that are, or certainly will be by the time Jan. 10 passes.

To keep up with the Joneses the Storm would have to part with more of its young players than it should be willing to and more draft picks than it has. Most of the extras were dealt in last year's shopping spree.

They have recouped most of their own picks, but they don't have a piggy bank like last year.

While no one expects a first place team to sell the farm, my guess is they will entertain offers for their older players and see just how much teams are willing to pay. There are likely at least four teams that are "all-in" this year and an arms race with that many buyers can lead to some pretty significant offers.

Guelph will not be looking to deal all its older players. Daws, Hillis and Gogolev could all possibly be back next season no matter what happens contract-wise, so there is no dire urgency to get what you can for them.

But if someone comes along and offers you a great package, that includes young player(s) and high pick, you would have to listen.

If not, then you still have a very good team to see how far things can go and you have players back next year to deal then.

One or two players will likely be moved. But the team should remain competitive for the remainder of the season, even if it isn't in first place.