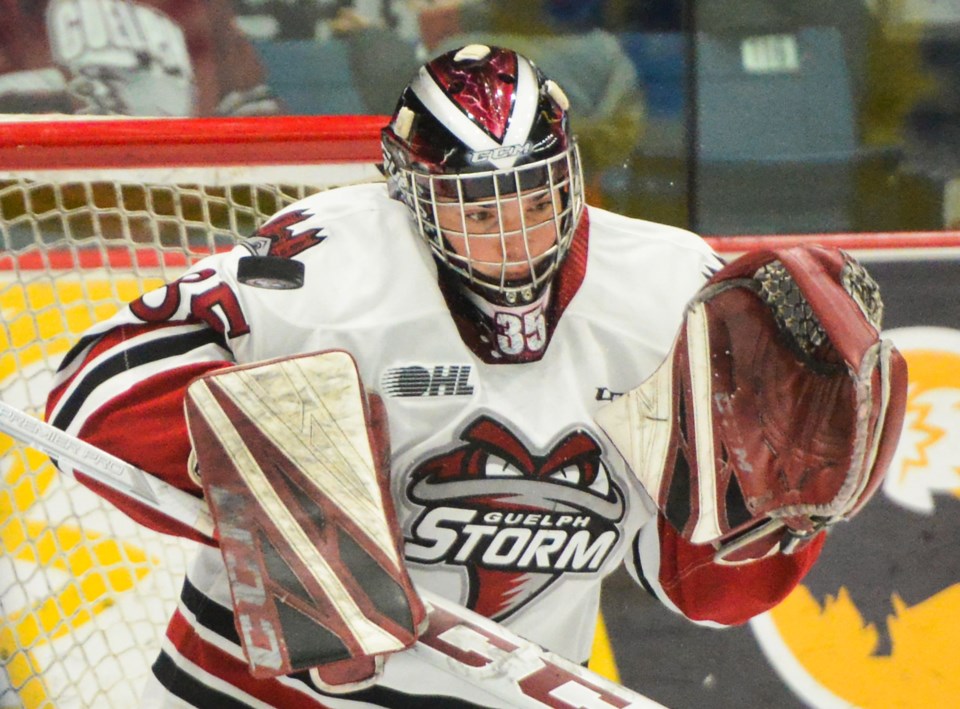 The whirlwind just became a hurricane.

Guelph Storm goaltender Nico Daws has, on several occasions, described this season as “a whirlwind.”

On Thursday evening Daws found out that he was a member of Team Canada and was headed to the Czech Republic, the first Guelph Storm player to make the Canadian national junior team since Robbie Fabbri five years ago.

It must have been a bittersweet moment.

At the tryout camp Daws was rooming with Peterborough Petes netminder Hunter Jones, a friend that he trains with in the summer with former Storm goaltending coach Matt Smith in Cambridge.

Jones got the call he was being sent home. With only four goalies in camp, that made Daws was one of three goalies that would be going.

The remarkable journey of the soon-to-be-19-year-old Burlington native this season is one that has been told many times locally, but is now catching national attention, and rightfully so.

Drafted in the seventh round, 122nd overall, by the Storm in 2016, he played midget hockey the next year for the Toronto Marlies, where he was coached by Storm co-owner Rick Gaetz.

His first year in Guelph he got in 14 games. The next season 20. Many of them mopping up after Anthony Popovich got the hook.

His goals against average coming into this season was 3.62. His save percentage 0.885.

With the Storm looking to develop young goaltender Owen Bennett, there was thought they might decide to keep Bennett and Anthony Popovich, which would likely have meant Daws could have been had for a mid-round draft pick if they had followed that train of thought.

But Popovich and the team decided it would be best if he moved on. Many had Guelph picked last in the Western Conference this season and Popovich was looking to get signed. So off to Flint he went.

In stepped a more focused, mature and fit Daws. And he has been nothing short of phenomenal, leading the OHL in most goaltending categories.

Daws has been named one of the game's three stars in 10 of his 20 starts. First star six times.

All this playing on a rookie-laden team that has three rookie defencemen on the bench most nights.

It’s a remarkable turnaround and one where he deserves most of the credit.

Whether he starts, backs up or doesn’t dress at the World Juniors is secondary right now.

He’s one of the biggest stories in junior hockey right now. And deservedly so.