Agriculture has been slow to embrace women in the boardroom

Tonight, dozens of women will be getting together at a country bar in Guelph.

Normally, that wouldn’t be news here.

But tonight it is. The group is the Ag Women’s Network, and the members are re-launching their organization, starting by unveiling a new logo.

It’s one step in a branding campaign that they figure they now need to identify themselves to others, given the way their group has taken off over the past year.

“We need some brand identity, something we can get behind,” says Jennifer Christie, one of the founding members and the organization’s current chair. “There’s momentum, there’s a spotlight on us, people are talking about us.”

Indeed, by the time they unveil their logo, at around 7:50 p.m. they’ll be nearing 1,100 members on their Facebook group. As well, they have more than 1,000 followers on their  blog.

Putting it in perspective, it took the fledgling organization two years to get its first 500 members, which it rightly considered a true achievement at the time. Any group would admire those numbers. But the latest 500 have joined in just the past six months.

All this activity inspired she and the other network organizers to start formally developing a brand, launching it with a logo, courtesy of Quarry Communications’ executive creative director Mike Palmer.

Understandably, network observers wonder what’s going on. Women have been involved in agriculture for decades or more, so how did this group of young professionals — which started out as a handful of casual friends and acquaintances — gain such momentum?

Well, besides their common passion for agriculture, Christie says a lot of their firepower is due to timing.

“Equality is a conversation that’s happening everywhere,” she says. “Everyone’s talking about the opportunities that arise with equality, and not just in agriculture. We’re a part of a bigger movement.”

It’s also the result of some pent-up frustration. Overall, agriculture has been slow to embrace women in the boardroom. There have been sparkling examples of women in leadership positions in some farm organizations; the Ontario Federation of Agriculture and Ontario Pork come to mind. But Christie says there is a lot of room for improvement. 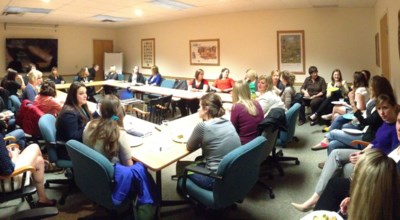 The Ag Women's Network has been growing quickly.

That’s one reason the network is focused on leadership, to give women skills and confidence to compete in the sector, and help it advance.

It’s not just primary producers who are joining the network, although they comprise more than 20 per cent of its membership (women who work on and off the farm make up another 18 per cent). The majority, 34 per cent, are agribusiness professionals – and that sense, given how women dominate agricultural marketing and communications, and much of that activity is based in Guelph.

The network organizers also plan to introduce their new governance structure, featuring leadership, advisory and mentorship teams. Christie envisions the latter consisting of mainly non-ag people, to promote some hybrid vigour and expose members to best practices from other disciplines.

And they’ll talk more about the way forward. One of the group’s most successful events (they called it a “winter warm-up”) was a virtual gathering over a weekend further expanded the network, attracting members beyond the Guelph area — way beyond, in fact, right across the country. Christie expects similar virtual efforts to follow, maybe like the storied CBC Farm Forum, kind of a Cross-Country Check-Up for agriculture.

But through all this network growth and maturing, Christie says they won’t lose sight of the social aspect of coming together, something that helped bring them together in the first place. In fact, the country bar setting was purposefully chosen to add some informality to tonight’s officialdom.

“A key reason for getting together is the social aspect,” says Christie. “For a group interested in agriculture, what better place in Guelph than the Stampede Ranch?”

All-natural volume enhancement for the face and body

Tired or sore legs and feet? It could be your shoes

Things you should know when meeting a personal injury lawyer

Coldest Night of the Year!

Things to consider when moving!

Get Connected to the Village Media Network!