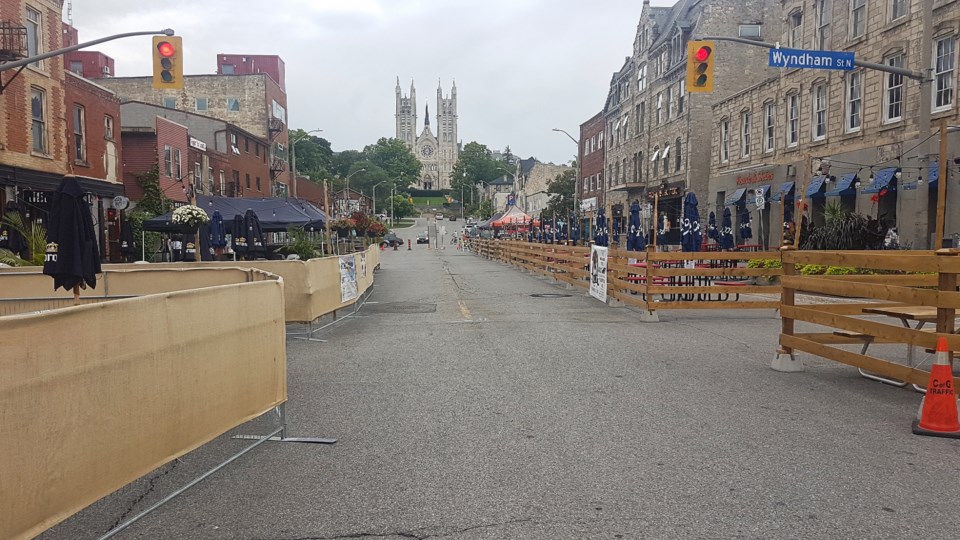 Bringing back last year’s booming Dining District has been a hot topic in Guelph as Spring approaches.

Last week, city staff prepared a report outlining plans for the Seasonal Patio Program (informally referred to as the Dining District) that will kick off this summer in March and run every year until summer 2023.

“The proposed program was modelled to provide the maximum space for patios, while also allowing for two-way traffic and delivery/emergency stoppages,” reads a city staff document answering questions about the district.

“What is being proposed is flexible and allows for the consideration of COVID impacts for more than just one business type.”

The city report suggests that street closures be prohibited – except for on special events – and that businesses part of the Seasonal Patio Program be allowed to extend their patios to sidewalks and their parking spots.

If this is the case, restaurants will be able to have a maximum of 4.3 meters of space available for patios and barriers on Wyndham Street and five metres of patio space on Macdonell Street.  This will allow vehicles to stop if needed and let trucks and buses pass through in a two-way lane.

In the case of possible intermittent closures, the city will need to spend roughly $100,000 worth of barriers which will be removed and reinstalled twice per week for 21 weeks.

City staff discussed many businesses perceiving a sense of inequity. They said that the proposed program for this year is flexible and offers solutions for more than one business type. Staff stated that restaurants said they wanted certainty during ‘unknown times’ and that once the city approves an intake application, they will automatically have a three-year agreement for the Dining District.

“Yes, the impacts of COVID are significant and unique. More importantly, though, not all businesses are impacted by the pandemic in the same ways. It is not just about space, some need access to short-term parking, others visibility, or accessible parking,” reads the document.

City staff reported that businesses expressed their support for the boundaries outlined last year and that there was not much interest to expand the boundaries further. They also added that any business or organization in Guelph can request a street closure permit anywhere in the city at any time and that those permits are not limited to the Dining District.

City staff said they have sufficient time to plan and schedule transit routes before the Dining District kicks off. This would also mean there are extra costs. For example, to have an extra three operators per day of a road closure would cost $150,000 plus the cost of extra kilometres.

“It also should be noted that the costs are estimated at this point in time. Depending on the amount of on-time-performance corrective actions required, the cost could escalate,” read the city staff document adding that there is a cost to meet transit time expectations and the city cannot accommodate street closures without there being a budget impact on transit.

Last year, city transit on-time performance for the summer of 2020 decreased 7 per cent compared to the same period last year. City staff said much of this could be the result of the routes that lost their 40-minute peak service.

It is also mentioned that ridership in 2020 was much lower than that of previous years.

“If our ridership starts to come back up in 2021 as we hope it will, our on-time-performance could suffer even more with the closure of downtown streets,” reads the document.

The document stated that staff recommendations for the patio program aren't based on specific complaints, rather they just want transit buses to be on time.

“If we can maintain on-time-performance and connection times, customer complaints will only relate to the potential diversions of each route and the inconvenience of the road closures. We really do not think volume on any specific day will be an issue,” read the document.

The document states that there will be fewer jobs, private sector investments, economic recovery, local micro-tourism and fewer eyes on Guelph if the city doesn’t offer them the space they need.