Guelph's places of worship still figuring out how to reopen safely

Lakeside, Basilica of Our Lady, St. Andrew's and St. George's among those who won't be open this weekend despite being allowed to
Jun 11, 2020 7:00 AM By: Tony Saxon 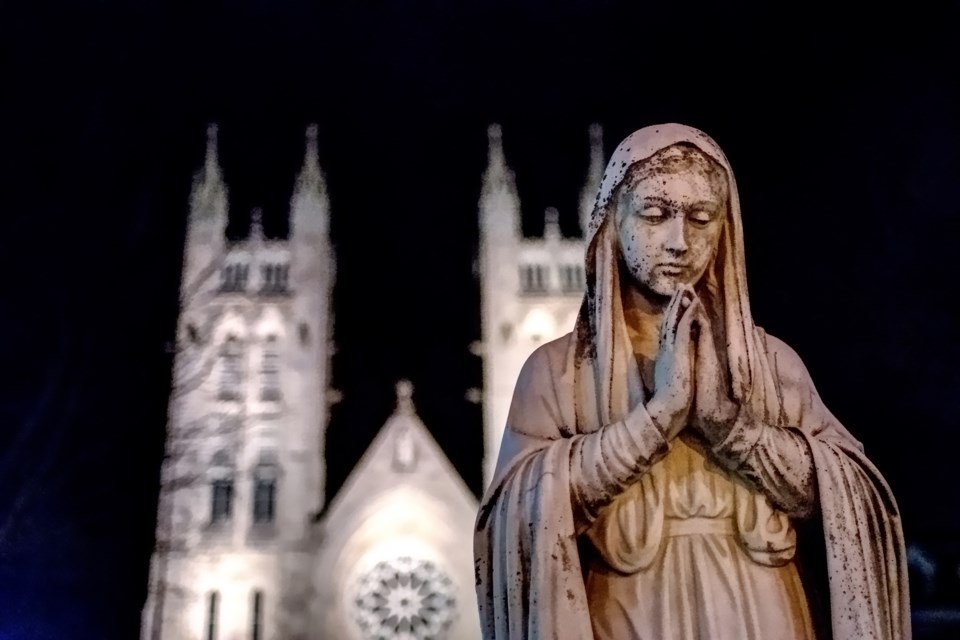 Guelph’s places of worship are busy trying to figure out how, and when, they will reopen.

Churches and other places of worship are permitted to reopen this weekend, but are only allowed to have up to 30 per cent capacity. Masks aren't mandatory, but recommended.

Many have been spending the past two days deciding on their approach to the news.

“It’s very, very welcome news, but it came very suddenly,” said Monsignor Murray Kroetsch of the Diocese of Hamilton, which includes Basilica of Our Lady, who will not be open this weekend, but will the following week. “We’re very happy, but it’s kind of taken us by surprise.”

The last two days have been spent planning on how to safely resume services.

“We’ve met with all our priests regarding guidelines on how to celebrate mass,” said Kroetsch.

There will be no choirs, just a cantor and instrumentalist, no hymn books (songs will be chosen and sung by memory) or other printed materials, people are asked not to linger following the service and readers will be reduced, he said.

“The most important question is how people will receive communion,” Kroetsch said.

“Those receiving communion will have to wear a mask and receive it by hand only at this time. There will be no dialogue with the priest. It will be done in silence.”

Kroetsch said what the Catholic church has seen in other areas that have resumed service recently is that very few come out the first week or two, so he isn’t too concerned about the 30 per cent capacity rule.

Lakeside Church, Guelph's largest, is another church that won’t be reopening this weekend as it works out how to do it safely.

“We’ve still got some questions about reopening,” said executive pastor Jeff Groenewald, whose church will continue with online service, at least this weekend.

“There’s still a lot of unknowns that we want to get answers to before we reopen. I think there’s some clarifications we’re all trying to get.”

Physical distancing a huge concern because Lakeside is a huge building with many different rooms where people can take part in service, he said. The main auditorium alone seats 1,000 people.

Groenewald said one of the biggest concerns is singing and what concerns with potentially spreading COVID-19 that includes.

“Singing is a big piece of our service,” he said.

Of those contacted, only the Muslim Society of Guelph planned on resuming services Friday.

“It will be really strange to welcome our patrons at the centre after the gap of 13 Fridays,” they said on Twitter.

“We need to ensure that we are prepared and are taking the needs and the safety of our members and guests into consideration. We won't reopen until we have received guidance and direction from our local Public Health Unit,” Borthwick said.

Public Health has said that wearing a mask is not mandatory in churches, as it will be starting Friday in commercial establishments, but that masks are recommended.

“No matter what levels of permission are granted by the government, our Ontario bishops and diocesan leaders have decided to proceed very cautiously toward any re-opening of our church buildings or re-gathering for in-person congregational worship,” Blackman said.

“So, we won't be open for some time; at least as it stands now. And when we do re-open our buildings I expect there will be quite stringent protocols in place.”

Rabbi Raphi Steiner at Chabad of Guelph on College Avenue said he is “still working on a plan right now and hope to open soon once we can ensure everyone's safety. That's where we're at now.”

The leaders of Beth Isaiah synagogue met Wednesday night and hope to resume Saturday morning services in July. They will continue to offer activities and services via Zoom.

Trinity United Church has told its members that it won't be opening. Narrow hallways and narrow aisles make it difficult to social distance, the church said, so at this time there is no plan to reopen.

Province investing $115 million to support home care system
Dec 2, 2020 1:00 PM
Comments
We welcome your feedback and encourage you to share your thoughts. We ask that you be respectful of others and their points of view, refrain from personal attacks and stay on topic. To learn about our commenting policies and how we moderate, please read our Community Guidelines.