A baker's dozen: consultant comes up with 13 new ward boundary options for Guelph 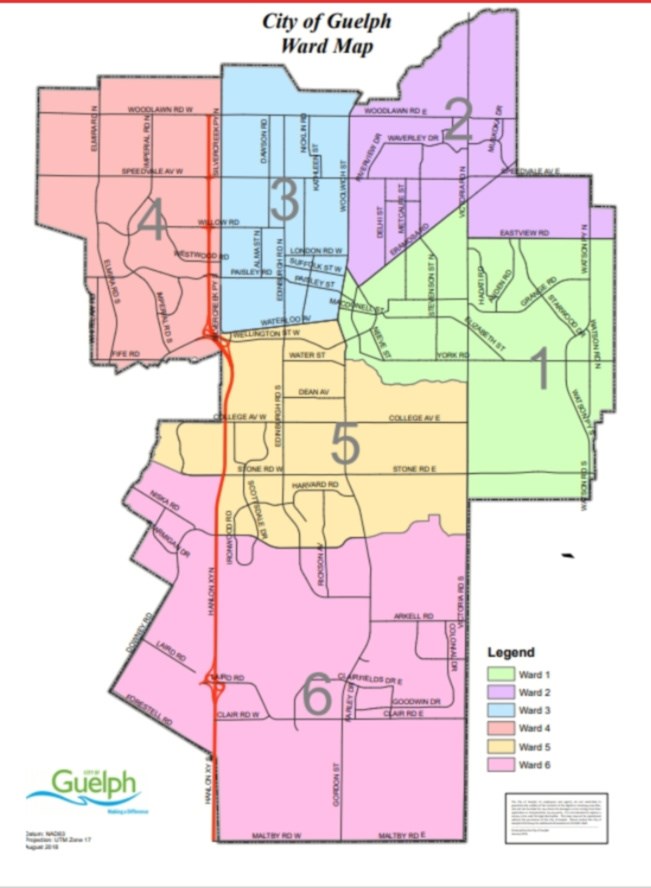 City council could look completely different following the next election, no matter who successfully runs for office, as a result of the ongoing ward boundary review.

On Tuesday, city officials released 13 maps, prepared by consultants, with options for redrawing the lines to include a variety of sizes and are asking for the public’s help in narrowing them down.

Among them are options for four, five, six, eight, 10 and 12 wards, with up to three councillors elected per ward. The report, which outlines each option, is available here.

“We’ve got a lot there to go through,” said Dylan McMahon, manager of the city clerk’s office.

City officials and consultants will be gathering feedback on the maps through an online survey as well as a pair of virtual town hall meetings, set for during the day on Wednesday and March 10 evening.

Public input will then be used to narrow down the options, and potentially tweak them, ahead of another round of consultations in early April. At that time, McMahon explained, residents can expect to see two to four maps to comment on, with a final report and recommendation heading to council in June.

“What we’ve tried to do with the maps, generally speaking, is prioritize equal population now and also for 2031,” McMahon said, noting most participants in a previous survey ranked equal population at the top priority for setting new ward boundaries.

“Another big ask from the community … was to try to protect communities of interest, neighbourhoods, so you see that in the maps – you see us trying to keep neighbourhoods together, not split them apart.”

There were 220 participants in an online survey that ran Jan. 4 to Jan. 22. Each was asked to rank their priorities in terms of deciding how to draw ward boundary lines – based on population, projected growth, communities of interest, or natural boundaries and geographic features such as rivers, railway lines and forests.

In many cases, priorities are mutually exclusive, meaning you can’t have them all, said McMahon.

“You can’t get perfect population while maintaining every distinct neighbourhood in a particular ward. What we need the community’s help doing is looking through those different options and telling us where we’ve done a good job of finding a balance and where maybe there’s still a little bit of work to do.”

Having 220 survey participants at that early stage was “really good,” McMahon added, suggesting it bodes well for public participation as the process moves forward.

“We didn’t have any maps to show them or anything like that, it was a little bit abstract at that point, so to have 220 engaged enough to fill out a survey, we feel really good about,” he said, noting the survey was about more than ranking priorities. “We got people educated and involved in this process even before they saw the maps. We’re very happy with the turnout.”

The sessions will be recorded and posted online for anyone to view on their own schedule.

“Those town halls will be largely the same in terms of the content that we’re presenting, but it will give people the opportunity to ask questions and that kind of thing,” said McMahon. “If we’ve heard a lot of questions about one topic, between the first and the second town hall, we may tweak a little bit to respond to some of the questions out there in the community.”

While the options being presented now include a variety of ward sizes and quantities, they don’t directly address the issue of full-time versus part-time councillors, which is something else council will need to decide at the end of this process process and is expected to be included in the later stages of public consultation.