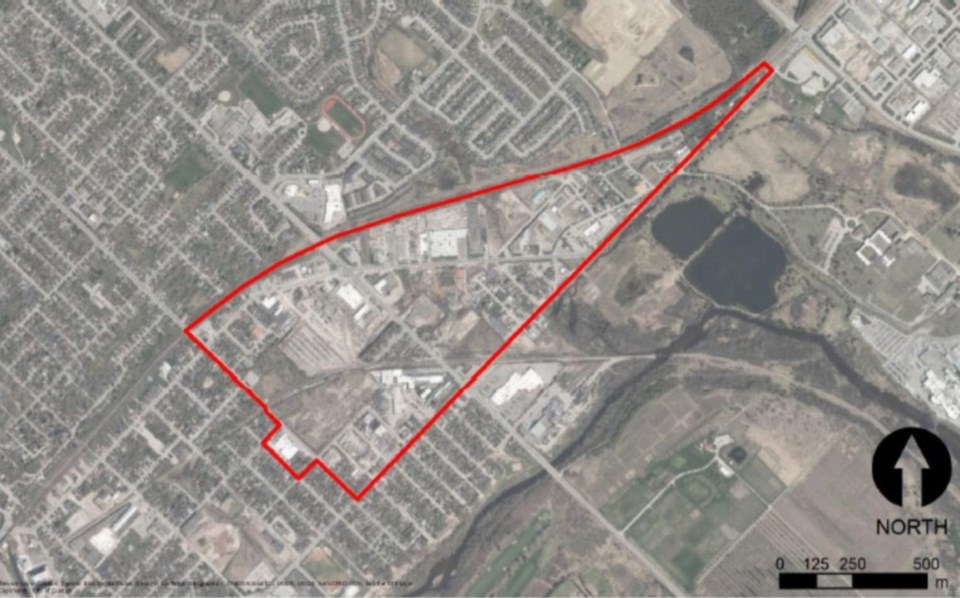 With a wide range of uses already at play, city-hired consultants are urging caution when council considers infill and redevelopment proposals for the York Road/Elizabeth Street area.

Dillon Consulting identified a bounty of potential compatibility issues, and in many cases a dearth of historical data, which presents a challenge when looking to accommodate provincially mandated growth.

The study area is triangular in shape, bordered by York Road to the southeast, Stevenson Street South to the southwest and the Go/Metrolinx line to the north. It includes a mixture of residential, commercial and industrial uses, as well as vacant lands, with several buildings of historical significance to the city.

Any new land uses, the firm suggests in a report, “would need to integrate adequate separation or mitigation” from sensitive land uses such as housing in order to “maintain economic viability” of the area.

Some of the study’s key findings are:

“Now that we understand what’s there, we can start to determine what the future of this area may look like,” Stacey Laughlin, senior policy planner for the city, told GuelphToday. “When we’re doing our growth plan conformity work, it’s important for us to have an understanding of what employment we have where so that we can then work toward meeting the density target set by the province.”

The province has mandated that Guelph’s population grow by 60,000 people in the next 30 years. Half of those people are to go into built-up areas such as the one in this study.

“We’ve been intending to look at this area for a little while,” Laughlin said, noting there’s been some commercial interest in the city’s east end, as well as some interest in establishing York Road as an entry point to the city.

This background study – the first step of several in determining appropriate development in the area – comes as city officials consider where and how to meet that mandated growth. It outlines some of the challenges of redevelopment and recommends a variety of technical studies needed before redevelopment occurs.

While they vary property to property, the technical studies include noise, dust, odour, vibration impact and environmental, among others, before developers can present their proposals to city council.

“We think it’s really important for us to understand what’s there before we start to plan for any changes and that any of those changes that we plan for need to respect the cultural heritage, the natural heritage, the employment functions that this area provides,” Laughlin said.

U of G and OFA team up to offer new training certificate for agricultural workers
Jan 17, 2021 4:00 PM