Instead votes in favour of finding a more suitable location for a fenced-in dog park not near residential neighbourhoods
Feb 3, 2020 8:20 PM By: Tony Saxon 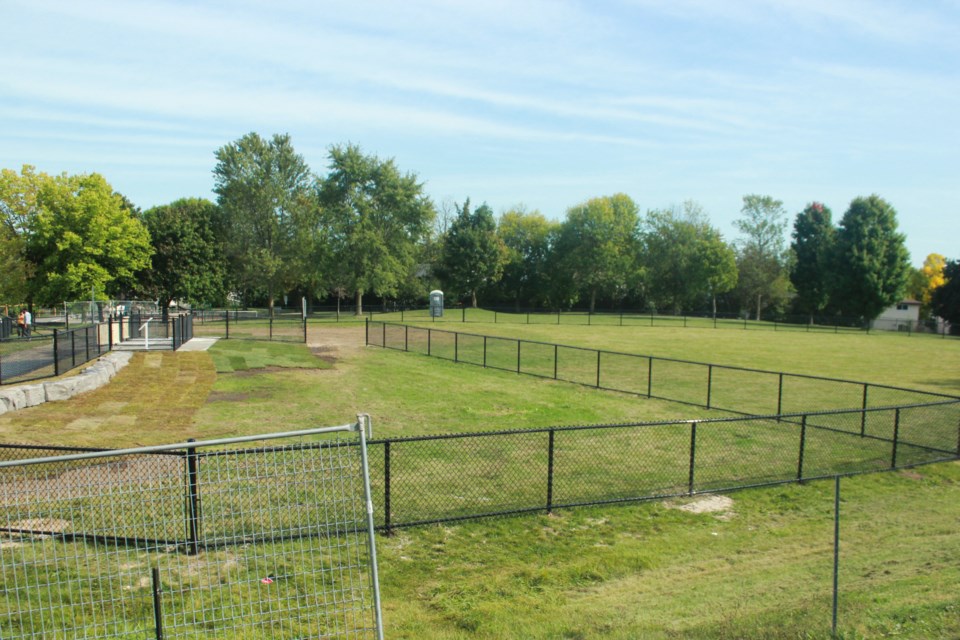 A wider look at the park. Anam Khan/GuelphToday

Just four months after opening, it looks like the fenced-in, leash-free dog park at Peter Misersky Park will be closed at the end of the month.

Planned fenced-in dog parks at Lee Park and Bristol Street are also likely going to be cancelled unless city council has a change of heart.

On Monday council basically admitted that it made a mistake last June when it voted unanimously in favour of a plan that included three fenced-in dog parks in the city.

Instead council directed staff to look for a new, more suitable location in a non-residential area that will be part of the 2021 budget considerations.

Staff will look at possible locations within the city that are not near residential areas, including Eastview Park, and may also recommend purchasing a suitable property.

Peter Misersky's dog park has created an uproar in the community due mostly to noise, smell and parking issues.

“Things have changed. We have one piece of info we didn't have at the time: lived experience,” said councillor Leanne Piper of the about face by council.

Council made the decision at it’s Committee of the Whole meeting Monday. The final decision will come at the council meeting Jan. 24. Delegations will be allowed.

If Monday’s vote sticks, the fenced-in leash-free dog park at Peter Misersky Park that opened last September will be padlocked the next day. It will be dismantled when the weather improves.

The city spent $100,000 setting up the Misersky Park location and some funds have been spent for the early work being done at Bristol Street.

There were also hours of staff work that went into the project.

“When I originally voted for this, I made a mistake,” said Coun. Bob Bell, adding that the effect the parks would have on residents “never entered my mind.”

Eastview Park got plenty of discussion on Monday as a possible location, but staff pointed out it was rejected when they made the initial recommendations for locations last year.

“There were some concerns with Eastview and that’s why it wasn’t chosen as a location,” said Deputy CAO Colleen Clack.

Those concerns included winter maintenance, distance from the parking lot to a location and grading of the property which could lead to accessibility issues.

Clack said there would be “significant costs” to building and maintaining a fenced-in dog park at Eastview Park.

She also said there likely wasn't another existing city park that fit the bill and land acquisition might be the only option.

Several members of councill (Cam Guthrie, Cathy Downer, Dan Gibson, Mike Salisbury) wanted to keep the dog park at Misersky Park open and build the new one on Bristol Street while the city looked for a better location to eventually build a new one, meeting the need of many dog owners that want a fenced-in park.

But once Bristol Street got removed, those councillors felt it made more sense to close Peter Misersky rather than keep one park open and deal with the issues it is causing.

“I just want a dog park. I want a fenced in dog park. That’s it. Our community wants it,” Guthrie said.

Several delegates on Monday echoed repeated concerns about the dog parks being near residential areas.

“Council listens to staff recommendations. I invite council to listen to the people,” said John Farley, who has been active in fighting the Misersky Park facility from the beginning.

“It will have a horrific effect on Bristol Street,” said Jan Brown of the park that was set for there.

All those opposed said the same thing: build fenced-in dog parks away from residential areas.

“The only way to solve the problem is to move the park away from residential,” Farley told council.