The owner of the garage says his business is being unfairly targeted while nearby residents complain about noise and smell from vehicles that shouldn't be there
May 8, 2021 9:00 AM By: Kenneth Armstrong 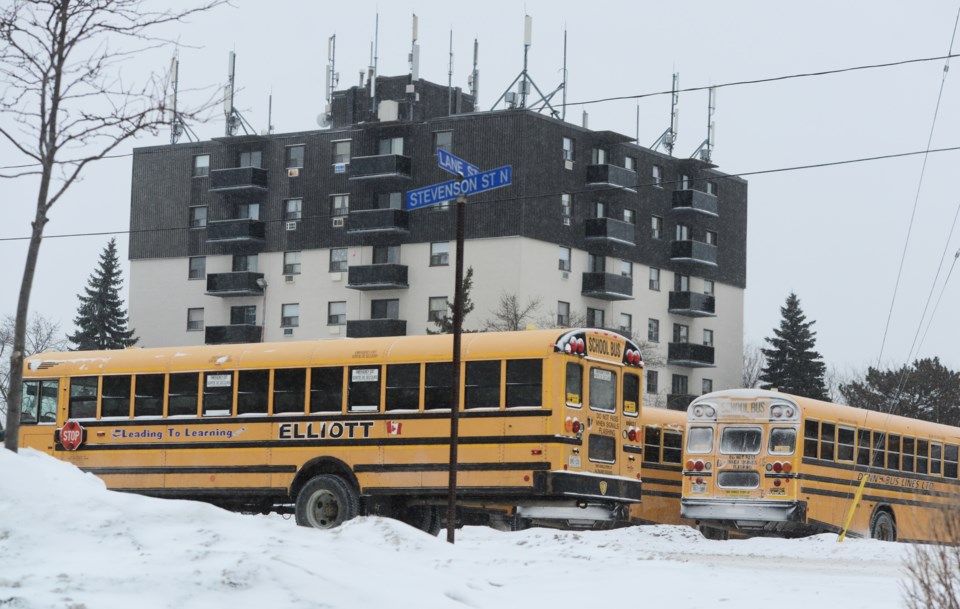 In 2019 the city told Dettmer Tire on Eramosa Road that these school buses parked in its lot had to be moved in response to complaints from residents of a neighbouring apartment. This week the city worked with Dettmer Tire to move a number of trucks that were being stored on the property in violation of its zoning. GuelphToday file photo

Update: As previously confirmed by the city, the business owner says the situation has been resolved and the trucks in question are no longer using the property.

A longstanding feud is continuing between some residents of an Eramosa Road apartment building and the garage next door.

City of Guelph staff recently intervened after complaints from some residents in the apartment building at 351 Eramosa Rd., which shares a fence with the Dettmer Tire at 325 Eramosa Rd.

The owner of the garage says his business is being unfairly targeted.

Ward 1 councillor Dan Gibson said he had received a number of complaints about large trucks idling on the Dettmer property, which complainants said was causing noise and air quality issues.

“It is a residential area that is next to a lot that is being used for, in some cases, heavy freight trucks and when you start those up, especially in the winter time, you need to give them the appropriate time to warm up,” said Gibson by phone on Thursday. “I know the calls from the residents are valid and the city is hearing them and I am hearing them too.”

Gibson said the issue is a matter of a landowner interpreting the city’s zoning and acceptable uses of his property and residents raising questions about that.

The recent issue mirrors a series of similar complaints dealt with in 2019, when Dettmer allowed about 25 school buses to be parked in the same lot behind its main building.

The buses were moved to Watson Parkway and York Road later that year.

One resident of the apartment building, Ann (she asked her last name not be used), said she has been living with constant noise and air quality issues because of the business next door.

“I have been here for about five years and it’s been a major issue the whole time,” she said. “It’s the noise — they are loading trailers at 5:30 in the morning, there’s the idling. It affects my sleep.”

When the school buses were next door, Ann said she had to move her bed to the living room because it would shake in the early morning hours when the buses were started.

“I worry about the air quality, with multiple vehicles idling that early in the morning,” she said.

Now that she has to work from home because of the pandemic, Ann said the effects are worse.

“It’s totally disrespectful — with noise, with idling. This is our home,” she said.

The most recent issue is a number of large trucks were being parked on the Dettmer lot, said Jeremy Laur, chief building official for the City of Guelph.

The Dettmer property is not technically zoned for its current use, said Laur, but is grandfathered in because its construction predated the bylaw.

Due to the zoning being grandfathered, if the same trucks were being serviced directly by the garage it would not be an issue the city would intervene in, said Laur.

City staff worked with the Dettmer co-owner Mike Adams to resolve the issue in 2019 with the school buses, as well as this past week with the trucks.

“The city’s first court of action is to always work with property owners to review the situation and determine if there is a change in practice that is required. In this case, after speaking with the property owner, they agreed and did have the vehicles of concern removed so the issue was addressed,” said Laur.

City bylaw enforcement officers have visited the site but no charges have been laid, said Scott Green, Guelph's manager of Corporate and Community Safety.

Reached by phone on Friday, Adams said the current construction on Stevenson Street, as well as 18-wheeler traffic delivering to Zehrs across the street cause much more noise and air quality issues than his garage.

The trucks in question on the lot were one-ton service trucks, said Adams, much smaller than an 18-wheeler or construction vehicles that operate in the immediate area.

“They are calling because we are idling to much, apparently. Meanwhile there is dump trucks for the construction idling for a half hour,” said Adams.

He said he is willing to work on a solution with the apartment building owners, which could include fencing, but not until the calls to bylaw cease.

“It’s harassment. I am almost thinking of getting a lawyer," said Adams of the calls to bylaw, which he says are constant.

The garage was built in 1962, eight years before the apartment building opened next door in 1970. Adams said anyone moving into a residential building next door to a garage should expect some amount of noise.

“It’s just a vengeance,” said Adams. “We were here before they were.”