Downtown establishments call for dining district to be extended beyond Sept. 22 (UPDATED)

'The longer we keep customers outside, spaced and seated in public, the better:' Chuck Nash, owner of Frank and Steins
Sep 3, 2020 3:28 PM By: Tony Saxon 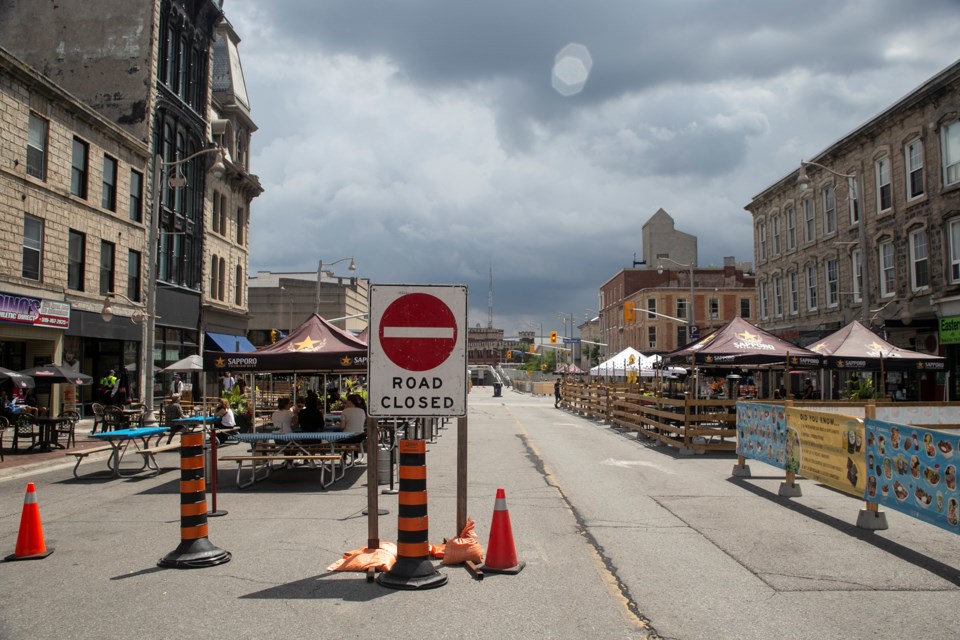 (UPDATE: This article has been updated to include a response from the city.)

The bars and restaurants taking part in the Downtown Dining District pilot project are asking it be extended beyond Sept. 21.

The city announced last week that the project, which was initially supposed to end on Sept. 7, has been extended another two weeks.

But in an open letter sent to members of council, local business leaders and media, the establishments are asking it be extended to Thanksgiving or Halloween.

“We would like to request the ability to continue the Dining District past the new deadline of September 21, 2020 until the weather makes it unreasonable to do so,” said the letter signed by nine downtown bars and restaurants.

“The longer we keep customers outside, spaced and seated in public, the better,” said Chuck Nash, owner/operator of Frank and Steins.

“Our collective view, is that by extending the GDDD, it would give our businesses a fighting chance to make what it surely to be the toughest winter on record for us,” said Derek Boudreau-Owner/Operator Royal Electric/Jimmy Jazz.

They also stress that outdoor socializing, eating and drinking is safer than indoor and that it will give returning students a place to socialize rather than holding large house parties in residential neighbourhoods.

The letter also points out that the downtown core is usually closed off to through traffic on weekend evenings during September as part of Project Safe Semester.

A response late Thursday afternoon from the city said those asking for a further extension can make thei rown application for a new dining distric if they want. The current one, which was requested by the Downtown Guelph Business Association, was given a two week extension after an extension request was made by the DGBA.

"If this group of restaurants and cafes wishes to make their own Dining District application, the online application form is found here: https://forms.guelph.ca/EcDev/Dining-District-Application," said the city's acting manager, economic development, Christine Chapman in a written response.

“There is no question that Guelph’s Downtown Dining District pilot program was and continues to be a success. Among our collective group of businesses, we have had overwhelming positive feedback from the community,” the letter reads.

The pilot project began as a way of helping downtown establishments recover from COVID losses, bring people back to work and enhance the downtown core, with the area surrounding the Wyndham/Macdonell streets intersection closed to through traffic and patios expanded onto the road.

Despite some early hiccups, it has been enthusiastically received by businesses and patrons.

“The response was incredible ...I can tell you firsthand that the number of Guelphites we saw repeatedly throughout the summer who had previously avoided downtown was huge. The exposure this has given to every downtown business, restaurant or not, is tremendous,” said Richard Overland of NV Kitchen and Bar.

“Many of the restaurants downtown, ours included, feel that the extension should extend beyond September 22nd to Thanksgiving or Halloween. The longer we keep customers outside, spaced and seated in public, the better,” said Nash.

The letter says that there is a large opportunity for coordination among the city, Downtown Guelph Business Associaion and downtown businesses to organize attractive programing for future years and ensure that 2021 sees a pedestrian zone built up from 2020, rather than scaled back.

“Rumours of alterations to the current design, limiting business to the sidewalk space and parking spaces are already concerning participants,” it said.

The letter states the dining district saved many from bankruptcy.