Twelve years ago Ray Mitchell was forced to close his previous downtown business to make way for the new library, which hasn't begun construction
May 6, 2020 9:00 AM By: Kenneth Armstrong 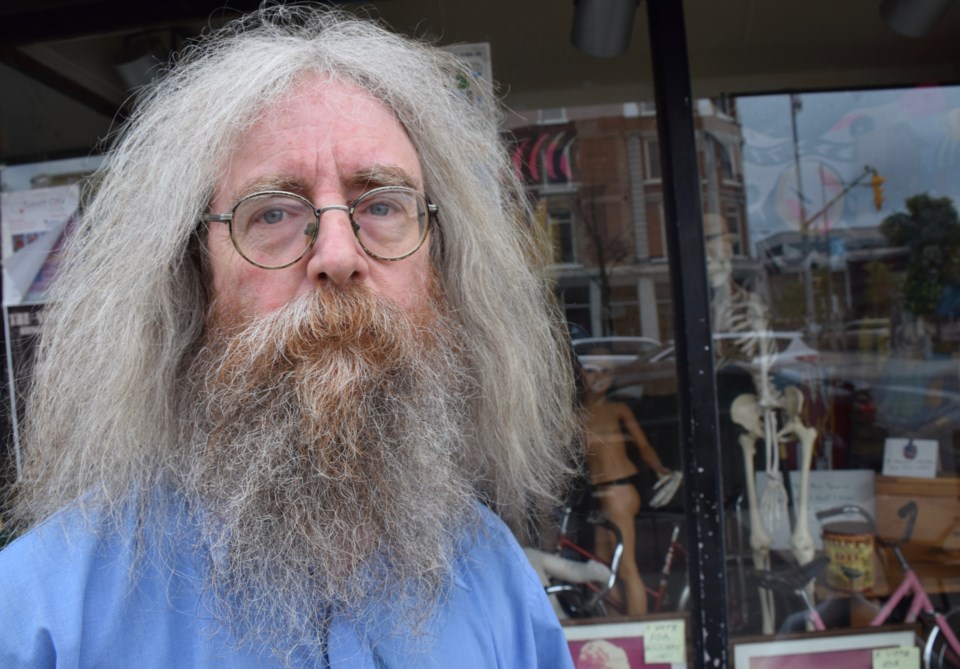 It’s déjà vu of sorts for Ray Mitchell, who is facing the closure of his second downtown retail store in 12 years, but this time he is leaving on his terms.

Dis-a-Ray Antiques & Collectibles is an antique store the has been located on Wyndham Street near Carden Street for about 11 years. It is nestled between The Cornerstone and McCabe's Irish Pub & Grill and when operating is easily identified by the myriad of objects on display on the sidewalk, from store mannequins to furniture and other oddities.

“I swear it’s the last store in Downtown Guelph where you can window shop,” said Mitchell by phone on Tuesday.

“You find out what people want and what they don’t want is crystal and silver plates and furniture. It’s not about sales or money, it’s about people. Every time they come in they should see something different,” said Mitchell. “Everything I say is pumping my own tires, but I have never seen a store like it anywhere else in the world.”

After being closed since mid-March due to COVID-19, Mitchell made the decision to permanently close up shop before the end of May.

Mitchell said he is one of the lucky ones, in that he wasn’t bound to a lease for the store and could walk away from the business with his head held high, not being evicted like other some other businesses.

Having said that, Mitchell said he has paid $7,500 in rent while the store has been closed to customers for two-and-a-half months.

“If I had known I would have been out at the end of April instead of the end of May, but the government kept hinting that rent relief was coming along, which it never did,” he said.

Mitchell said he feels for his neighbours who have received eviction notices.

Over the next few weeks, Mitchell will be moving his inventory into a shipping container, not sure what he will end up doing with much of it.

“I have a lot of people who would love to help, but how do you empty places with social distancing?” said Mitchell.

“It’s kind of funny, it’s like some kind of a Russian novel I am living in -- the black humour of it all — because I can’t have a going-out-of-business sale, which costs me, I can’t give it away because charities aren’t open and I can’t take it to the dump because it’s not open,” he said.

Mitchell figures he’ll end up donating about half of his inventory to charity shops.

“I don’t want to throw good things into a dumpster,” he said.

In 2009, Mitchell was forced to close his previous downtown retail store, the Family Thrift Store on the other end of Wyndham, as the building was demolished to make room for a parking lot that would eventually be a part of the Baker Street redevelopment.

“That was a horror, it was just so bizarre,” said Mitchell. “The city fathers get lured by these consultants working on behalf of developers, telling them to put a massive condominium into Baker Street parking lot and then you get your library for free.”

Almost 12 years later, the new library project has yet to begin construction.

“We never have anyone in our corner. The downtown board was actually in favour of the thrift store being demolished. They saw the greater good of a new library,” said Mitchell. “They promised me money for relocation, but it never came. That was probably the most heartbreaking thing of all.”

Not only the store was demolished, noted Mitchell, but also the apartments in the same building.

“It was a beautiful apartment building and owned by a really nice construction company, you had to buzz to get in, it was clean and every time someone left they put in new carpet and new paint — it was arguably the best apartment in downtown Guelph and now it’s just a big hole in the block,” he said. “Those are potential customers, those are the kinds of people you want downtown, because they are students, they are artists.”

The downtown has an immune system, said Mitchell, and city council and the Downtown Guelph Business Association didn’t see issues like gentrification and the opioid crisis coming, let alone COVID-19.

“I knew a recession was coming, especially with housing prices being so ridiculous, but I never saw an epidemic coming, but I knew there would be something. There’s always something, that’s something they don’t seem to recognize,” he said.

Mitchell said he was able to operate Dis-a-Ray and the Family Thrift Store and pay downtown rent because he purchased his home in 1982 for $30,000.

“This is the death of retail. If someone tries to do it now and they bought their house for $400,000, they can’t afford to rent a store in downtown Guelph and sell a commodity. They would have to charge 10 times what I charge,” he said.

A few years ago, Mitchell’s daughter Jenny Mitchell began selling T-Shirts in a series named Gone Guelph, which featured now defunct businesses in Guelph. One of her first designs was an homage to the Family Thrift Store.

Asked if Dis-a-Ray will be next to be featured, Mitchell noted those designs already exist.

“My face is on underwear, it’s on bums all over the world,” said Mitchell.