The stock of food items at the Guelph Food Bank is about one-third what it should be this time of year
Nov 2, 2020 8:30 AM By: Kenneth Armstrong 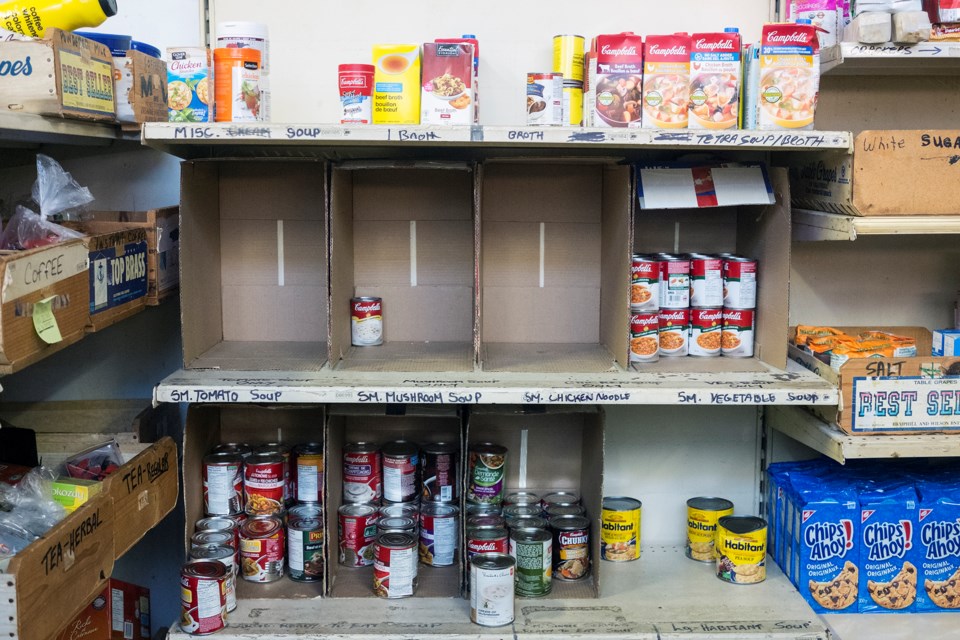 Some areas on shelves intended to hold canned soup sit empty at the Guelph Food Bank in this 2017 photo. Kenneth Armstrong/GuelphToday File photo

A lack of food drives at local schools and businesses is leading to empty shelves, says the Guelph Food Bank.

The stock of food on the shelves is currently about a third of what it would usually be at this time of year, which typically sees the agency through until Christmas, said Pauline Cripps, administrator at Guelph Food Bank.

“Our food level stock is low right now, which is alarming for us,” said Cripps. “Food drives have not been going the way they normally would because of the pandemic, so while we are still receiving monetary donations we are not receiving as many non-perishable donations.”

Cripps said the problem started during Food Bank’s spring food drive when it was interrupted by the economic shutdown and closure of schools.

“I think it was within a day or two of our spring food drive starting that the pandemic locked everything down so all of the businesses and schools that were doing food drives all of a sudden weren’t open and we got almost no food from that drive at all,” said Cripps.

Donations did pick up over thanksgiving, said Cripps, but most schools are not collecting items for food drives by order of the school boards.

“For good reason,” said Cripps. “It makes sense but we lost a lot there.”

For the second year in a row the Food Bank will not be receiving items from the annual Trick-or-Eat even put on by the U of G student union in which university students go door-to-door asking for non-perishable food items.

While the amount of food items coming in to the Food Bank has decreased, the need in the community for those items is as steady as ever, said Cripps.

“We have seen a little bit of a change in our client base, we are seeing a lot more people who have been dealing with work layoffs and shortages, more than our normal clientele,” she said. “We are definitely still busy.”

The most needed items are the non-perishable items that would normally be well stocked at the Food Bank at this time of year: canned items like vegetables, fruit, soup and pasta sauce, as well as dried pasta, Kraft Dinner and food helpers.

“Those are staples we always have on our shelf and right now our stock is dwindling more than I have seen it in years,” said Cripps.

Food items can be dropped off at the contactless drop-off at the back of the Guelph Food bank on Crimea Street, as well as at the bins located at local grocery stores and fire halls.

Donations of money can also be made via the agency’s web site.