David Merner is one of nine contestants running to be the next leader of the Green Party of Canada
Aug 14, 2020 10:34 AM By: Anam Khan 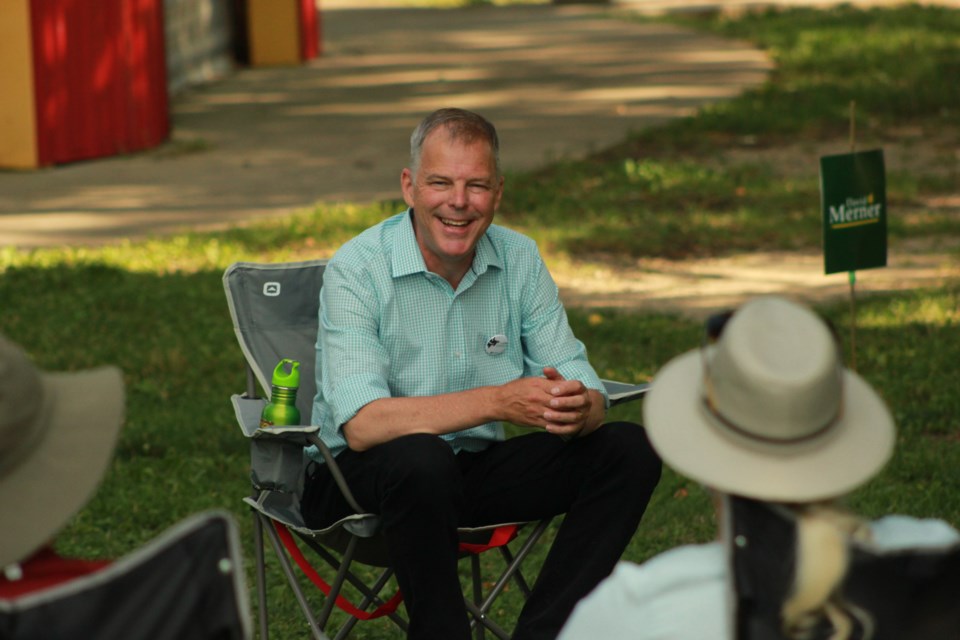 David Merner, leadership candidate for the Green Party of Canada feels confident about Guelph going green in the next federal election.

“I’m convinced we can break through next time,” said Merner in an interview with GuelphToday Thursday.

“We just need to do the hard work of politics. That’s why I’m here,” said Merner who held a socially distanced campaign event in Riverside Park as part of his campaign tour where he engaged with roughly a dozen supporters who sat on the grass wearing masks.

Merner is one of nine candidates competing to be the next leader. A winner will be selected at a national convention in Charlottetown this fall replacing Elizabeth May who stepped down in November 2019 after leading the Green Party of Canada for 13 years.

“Guelph is one of the places in the country where we have the best chances, federally and provincially. It’s a very special place for the Green Party,” said Merner.

“We have had fantastic candidates here,” said Merner about MPP Mike Schreiner whos been an incumbent since 2015 and federal candidate for the 2019 election, Steve Dyck who lost to Liberal MP Lloyd Longfield.

Merner said its important to continue to build the campaign.

“We need to continue to campaign, knock on doors, make phone calls. There’s an old saying that politics is 90 per cent perspiration and 10 per cent inspiration,” said Merner.

“I think Guelph voters want to see us taking this riding seriously.”

With the pandemic halting the traditional way to run a campaign by knocking on doors, Merner has been hosting community zoom calls and outdoor events.

“People just love it. They love the face to face,” said Merner.

“When you’re face to face with someone, you can connect even if they’re two metres away.”

He said the people of Guelph are lucky to live in a spectacularly beautiful place and the reason he believes Guelph has so many Green Party supporters is because of their connection to nature.

“People can see the beauty of the farmlands and the river valleys and just how green it is here,” said Merner.

“People can really appreciate nature because it’s all around us here in Guelph.”

He said the reason he joined the Green Party after supporting the Liberal Party of Canada for 30 years and even running as a candidate for in 2015 for Esquimalt—Saanich—Sooke, is because he believes the science is clear.

“We’re in a climate emergency and we need to take action now,” said Merner.

“I hope that Canadians from coast to coast realize how lucky we are and how much we have to protect.”