Guelph forges ahead on renewable energy goals despite changes provincially 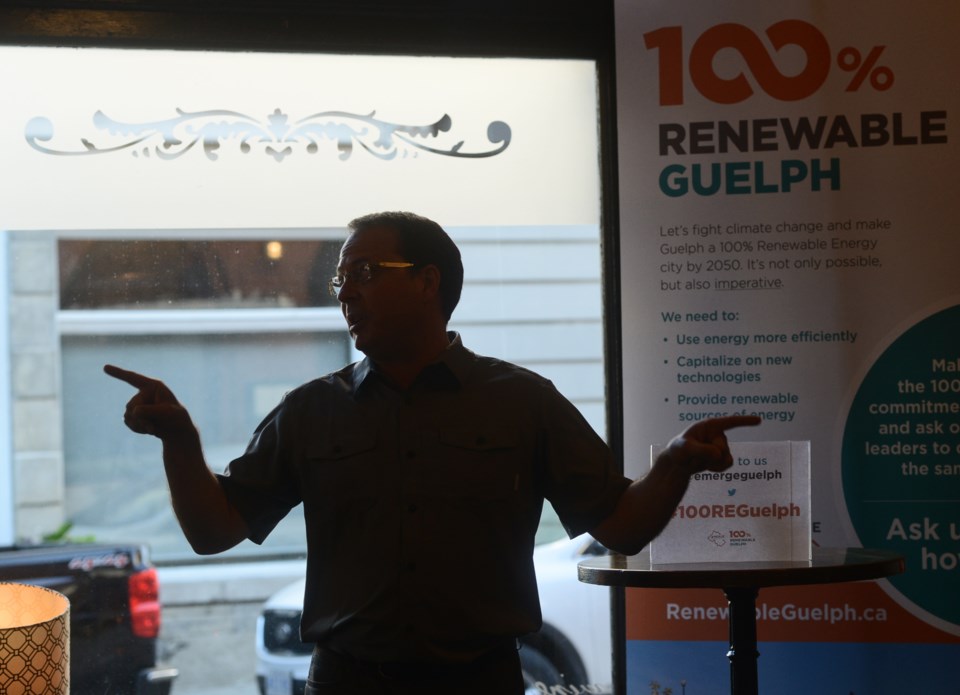 As the new provincial government made what many feel are un-green moves the past couple of weeks, the City of Guelph will continue to push in the other direction.

Earlier this week the province cancelled a number of green rebate programs for energy-efficient renovations and plans on ending the carbon tax program in the province.

“When I think about that program and the announcement made by the premier a couple of days ago, I think ‘okay, that’s fine if you want to cancel those types of programs, then Guelph will just show you how it’s done',” mayor Cam Guthrie said.

Guthrie spoke to a gathering of roughly 50 people Thursday at the Red Brick Cafe for a celebration/launch/fundraiser for Guelph’s goal of becoming a 100 per cent renewable city by 2050.

The event was hosted by eMERGE Guelph, a not-for-profit organization that helps promote and facilitate sustainable living and is the major organized force behind Guelph’s bid to join 1,000 other cities worldwide, including Vancouver and Oxford County, that have committed to becoming 100 per cent renewable.

Guthrie said Thursday that the city is still looking at a program for Guelph where property owners could make energy-saving renovations to their home and have some of the payment be covered by property taxes over time.

eMERGE executive director Evan Ferrari felt compelled to address some of the recent moves he sees as a step backwards.

“We see climate change as a clear and present danger and that maybe by ‘polluter pay,’ by putting a price on the pollution that causes climate change, is critical,” Ferrari said, adding that incentives for energy efficiency have proven to help accelerate climate change communication.

City Council voted unanimously in May to pursue the goal of being a 100 per cent renewable energy city by 2050.

That means a city-wide commitment to reducing energy, conserving energy and rethinking the way and opportunities for the energy we do use.

In addition to the obvious environmental benefits, the move is also seen as a way to create local jobs, attract business and help bolster Guelph’s brand.

He sees it as another way that Guelph could brand and market itself.

“That just is a huge branding and marketing opportunity for our city,” the mayor said.

The city is in the process of looking at ways that it can achieve 100 per cent renewable on a corporate level, something that could include everything from electric buses to retrofitting buildings.

Guelph’s new MPP Mike Schreiner said he has been doing media interviews all week after the province pulled back on green initiatives.

“I want us to actually say ‘yes, Guelph is open for business when it comes to the clean economy,'” Schreiner said.

“If the new government wants to take a step backwards, there’s communities like Guelph that are going to embrace the opportunity and continue marching forward,” Schreiner said.

MP Lloyd Longfield said it was great to see so many people committed to one goal, “and that’s saving the planet.”

“We are going to get it done and it’s a question of how we work together,” Longfield said, noting that he, Guthrie and Schreiner have an upcoming meeting on the issue.

“This isn’t a partisan issue. This is an issue we have to work on together,” Longfield said. “I know Guelph just does that. It’s in our DNA."

More about eMERGE and the 100 per cent renewable goal can be found on the eMERGE website.