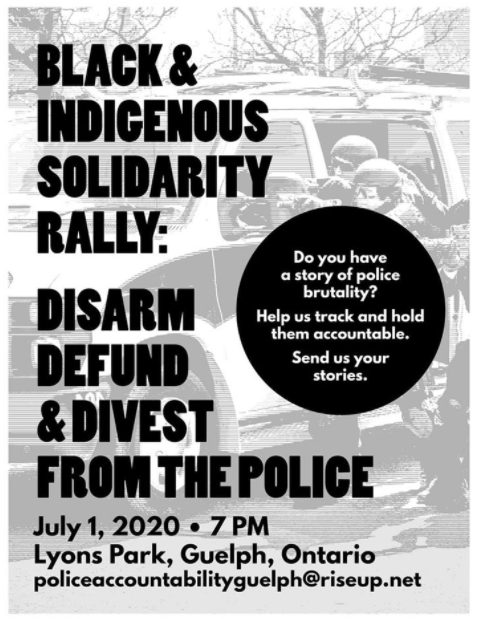 This article contains a correction from the original version. Amarilla said that a lot of people in Guelph "are not" willing to engage in conversation about police harm.

Most people in Guelph are unaware of how police are harming marginalized and racialized people here claim organizers of the anti-police rally and march planned for Canada Day.

Indigenous people, Black people and marginalized people in Guelph have a very different experience with police than the majority of Guelph, said Rosa Amarilla, one of the organizers of The Guelph Black and Indigenous Solidarity Rally Against Police.

It takes place Wednesday starting at 7 p.m. in Lyon Park.

“They’re not seeing it. It’s not their lived experience,” Amarilla said when asked if Guelph has the same issues as larger urban centres.

Wednesday’s event, which is open to all, will feature speakers, music and a protest march. The march route will be revealed at the event.

The event calls for the defunding and disarming of police.

“I think it’s irresponsible to think we don’t have those problems here,” she said, adding that the people of Guelph need to do is engage with the communities often targeted by police and ask ‘what can we do from our point of privilege to support you.’

Organizers of Wednesday’s rally say it was important to hold the event on Canada Day.

Doing so highlights the harm that Canada has done to Indigenous people, Amarilla said.

“If you’re celebrating Canada, you’re also celebrating ongoing Indigenous genocide and all the harm that Canada has done,” Amarilla said in a phone interview.

She understands people don’t celebrate maliciously and are often ignorant to what colonialism has done to Indigenous people, but it is still an ongoing harm that needs to be recognized.

Amarilla said the concept of defunding police is one that requires understanding.

“More generally, we want to talk about what abolition (of police) would look like,” she said. “What does that mean about keeping the community and keeping people safe … I don’t think a lot of people know what it means, the difference between defunding versus disbanding.”

Wellington County green bin collection to begin next week
Jul 3, 2020 12:00 PM
Comments
We welcome your feedback and encourage you to share your thoughts. We ask that you be respectful of others and their points of view, refrain from personal attacks and stay on topic. To learn about our commenting policies and how we moderate, please read our Community Guidelines.