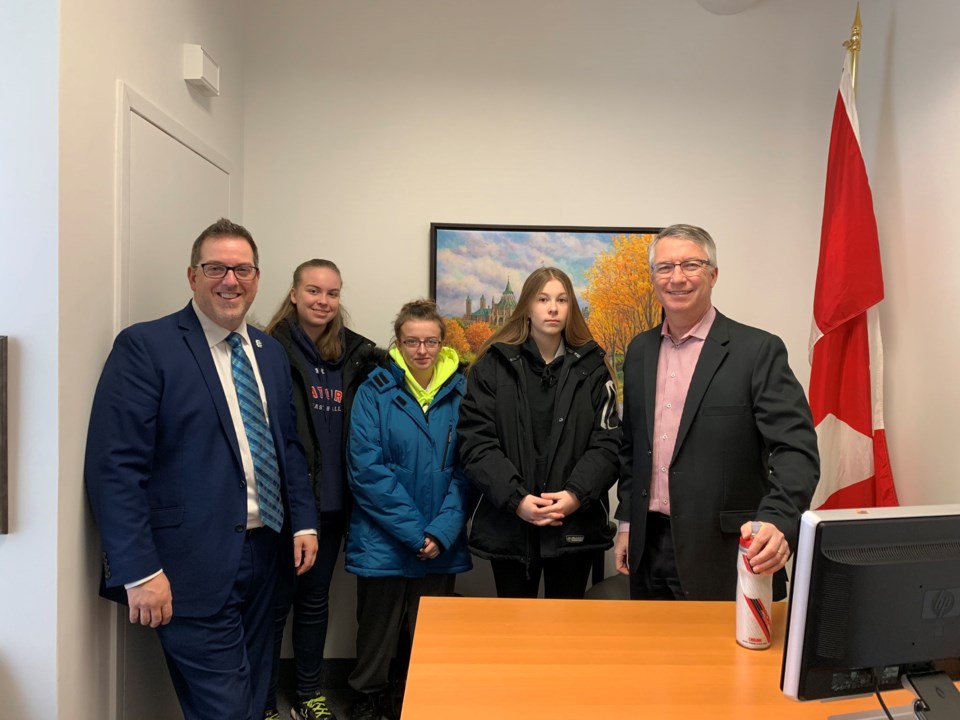 While the province and the teachers' unions continue to negotiate at the bargaining table, the strike did not stop some Guelph students from learning.

During Tuesday's one-day strike on Tuesday where all Wellington Catholic School Board schools were closed, local organizations opened their doors to encourage secondary students to visit their offices to provide opportunities for students to learn about their respectful fields.

It started with Mayor Cam Guthrie, who tweeted his offer for students in Guelph to spend some time with him at city hall to learn how the city works, even offering to buy them lunch.

Any #Guelph @WellingtonCath High school students wish to hang with me tomorrow due to the strike? pic.twitter.com/H5uJjLFbmE

Seeing this, many local businesses began to follow suit with the Guelph Nighthawks, the Chamber of Commerce and the PIN Network Guelph-Wellington.

Mayor @CamGuthrie’s invitation to students last week inspired us to follow suit. If you’ve aspired to work in pro sports and are out of school on strike tomorrow, check out 👇 and join us as a Nighthawk for a day. https://t.co/nGy2a7kdQu

We were joined by 3 students this afternoon to learn about the importance of a Chamber & what we do for the business community. Thanks @CamGuthrie for bringing them by for a tour! #Guelph pic.twitter.com/kiC4lf20lM

Thanks @CamGuthrie for visiting my office with the @lionsnewstoday @TheBlueBlast high school students that are shadowing you today from @WellingtonCath - showing them how the City runs, and how important it is for us to work together. #teamwork pic.twitter.com/JT6zXgzdBX

Guthrie said with the strike being a kitchen table conversation at this point, it's a natural question for him to ask his own two high school children what they’re doing during the strike.

“It got me thinking, 'you know what, if it is a strike day, and the kids can't be in school, maybe there’s a different type of learning opportunity that some students might be interested in,'” said Guthrie.

The students shadowed Guthrie, joined his meetings and were introduced to various departments in city hall.

They also visited the Guelph Chamber of Commerce with Guthrie and met with MP Lloyd Longfield to learn about projects the city and the federal government are working on together.

Guthrie said Wimpy’s Diner was kind enough to give the students a free meal because they thought it was a great idea that they spent the day learning despite the strike.

The team then went to the waste innovation facility to learn about how waste trucks work and how the organics facility works in order to understand food sorting from both a financial and environmental point of view.

“That was interesting because I asked them if they knew that and they didn’t. So now they’re environmental waste ambassadors I call them,” said Guthrie.

The team then proceeded to the transit facility to meet the management team and learn about the new technologies that have been added to the buses.

Guthrie said the students were able to give him feedback on everything they learned in the city.

“I learned what they like, what they want more of, we talked about safety in the city, and transit, and jobs,” said Guthrie.

“It wasn’t just them learning, I found that I learned just as much too.”

As a former Guelph student herself she says she understands the importance of learning about different organizations in the community and the impact it can have on future aspirations.

“It was a real treat to have them in the office,” said Shayani who discussed the Chamber of Commerce’s history, its art and its role as a leading voice in business in the community with the students.

She said Guthrie gave some great examples of how the city and council engage with the chamber, took questions from the students and discussed the importance of young people getting involved in the community in order to turn a tricky situation in time into a positive experience.

“It's very Guelph. We do that for each other. Building relationships across different organizations and businesses is important,” said Shayani.

Good morning, Guelph!
Sep 24, 2020 6:00 AM
Comments
We welcome your feedback and encourage you to share your thoughts. We ask that you be respectful of others and their points of view, refrain from personal attacks and stay on topic. To learn about our commenting policies and how we moderate, please read our Community Guidelines.