John McCrae to be eulogized on 100th anniversary of his death 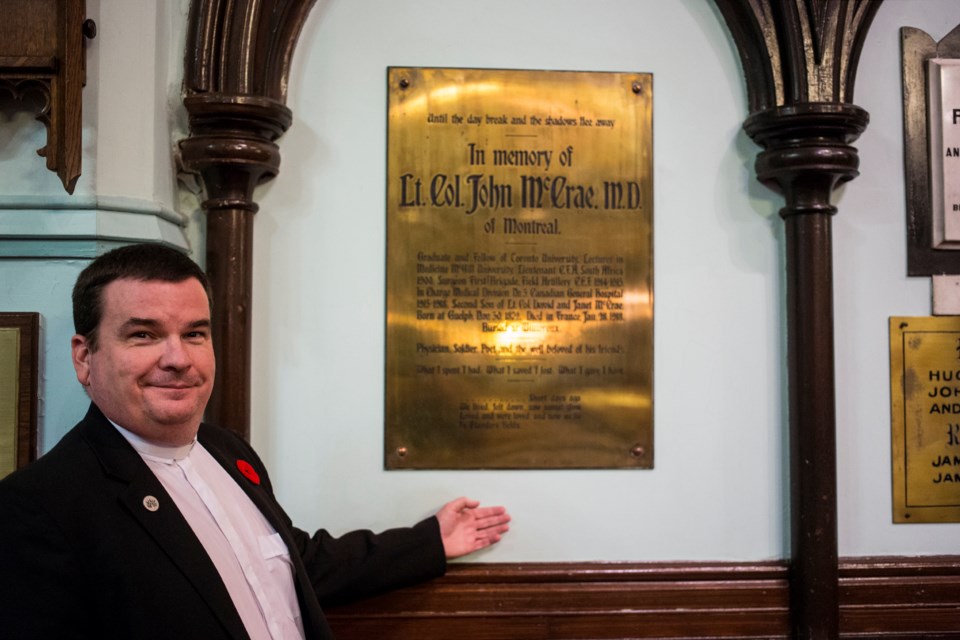 Rev. John Borthwick seen with a commemorative plaque in honour of John McCrae at St. Andrew's Presbyterian Church. A service scheduled for this Sunday will mark the 100th anniversary of McCrae's death. Kenneth Armstrong/GuelphToday

A eulogy will be held this Sunday, 100 years to the day of the death of a famous Guelph-born doctor, soldier, and poet.

The life and legacy of Lt. Col. John McCrae will be commemorated during a number of events being held in Guelph this weekend.

“It will be our regular service, but the whole service will be featuring the centenary of McCrae’s death,” said Borthwick.

All are invited to attend.

The service will be approached as a memorial service, said Borthwick, but performed 100 years after McCrae’s death in Boulogne-sur-Mer, France.

“My words will be memorializing the legacy he has had,” he added.

Because his parents were prominent members of the St. Andrew’s congregation, Borthwick said he believes a memorial service would have been conducted in Guelph shortly after McCrae’s death.

“Whenever we do a memorial service we are trying to tell people, as a way of comforting them, that we will always be remembered. That they have left a mark, that the person that passed away had some kind of impact on the world,” said Borthwick.

During the service, The Last Post will be played, a two minute silence will be observed and Borthwick said there will be a reading of McCrae’s famous poem, In Flanders Fields.

”One hundred years out, people are still remembering his name and reading his poem. Certainly he is remembered and his legacy is remembered,” said Borthwick.The service will be held in partnership with the City of Guelph Museums, the 11th Field Artillery Regiment, the Royal Canadian Legion and Guelph Historical Society.

McCrae will be eulogized by Mayor Cam Guthrie, Honorary Colonel Michael McKay of the 11th Field Artillery Regiment and Debra Nash-Chambers on behalf of the Guelph Historical Society.

The Regiment will contribute a colour guard for the event, said Borthwick, while the legion will provide a funeral pall to be adorned with poppies during the service.

McCrae house will be open with free admission from 1 to 5 p.m.

At 3 p.m., the River Run Centre will feature a tribute called John McCrae: His Life in Words, Images and Song. The tribute will mark the centenary of McCrae’s passing with songs and readings from his era by Hugh Brewster and the Elora Singers.

McCrae’s name is etched along with the church’s fellow war dead from The Great War, along with the reading: greater love hath no man than this, that a man lay down his life for his friends.

Borthwick said those words will be an important part of his service.

“When you get a gathering of people who come from a variety of spaces and places — probably many of them are serving in a variety of ways. It’s the idea of encouraging them to continue to do that. (Service is) the gift you give the world,” he said.

An almost 100-year-old plaque in memory of McCrae is hung in the sanctuary of St. Andrew’s and Borthwick said a second plaque will be added to mark the centenary of his death.