'That’s what’s turning people off, to be honest with you,' says Ray Ferraro of inaccurate accusations aimed at the PC party
Jun 4, 2018 3:19 PM By: Kenneth Armstrong 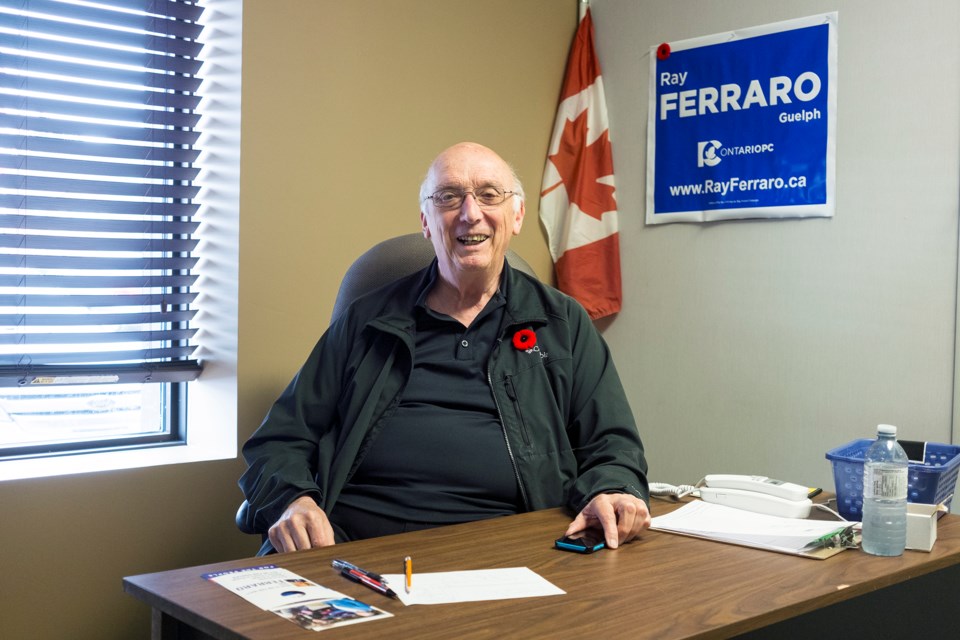 All signs are pointing to either a PC or NDP government and the local Tory candidate says one thing is for certain: “whoever gets in are going to be watched.”

Ray Ferraro and his Ontario PC campaign team are watching the polls for the Guelph riding going into this Thursday’s election, probably the only four-way race in the province.

Ferraro knows the polls don’t tell the whole story, but he is hoping the ones predicting a Doug Ford-led majority government in Ontario for the next four years are correct.

“I think the PCs have a chance to get a workable majority because he is going to be very strong in the Toronto area. But having said all that, we need people (to vote) in the other areas,” said Ferraro.

Ford has so far not stopped in Guelph — not during the campaign and not during his leadership bid.

Ferraro said he was hoping Ford would have made a whistle stop in Guelph.

“He got a tremendous response in Kitchener and I was amazed at how many people from Guelph were there,” said Ferraro. “We have been trying to get him here, but he’s been all over the province.”

A Ford government would work quickly to address the issues facing Ontarians, said Ferraro. He said his experience working on city council has given him the experience to get to work right away under a Ford government.

Ferraro said he has never seen anything in politics like the announcement Kathleen Wynne made on Saturday, conceding that she will not be premier and to vote Liberal to prevent either a PC or NDP majority government.

“She’s not conceding. She’s conceding she is losing. That would be similar to me conceding that I am bald,” said Ferraro. “Wynne is pretty smart, she’s now getting a little sympathy vote.”

Issues that are top of mind for Guelphites who have contacted him are health care and housing, said Ferraro.

“It boggles my mind that a couple spends all of their lives here, pay taxes all of their life and they need a retirement home and they send one to Mount Forest and the husband has to go to Chatham. That’s almost inhumane,” he said.

Not enough low-income housing has been offered to Guelph, said Ferraro. He said projects tend to go elsewhere in Wellington County, like Fergus and Palmerston.

Other concerns he is hearing from Guelphites is the cost of gasoline and electricity, but the issue Ferraro said has affected him the most is the Liberal government’s cancelling of sheltered workshops, which offered employment opportunities and skills training for people with intellectual disabilities.

“I have had parents sit here and say it wasn’t the money, they were making $25 a week. But their son or daughter had a purpose in life,” said Ferraro. “Honestly, it was heart breaking.”

The local race has mostly been respectful, said Ferraro, but he said there have been a few cases of what he called "gutter politics."

Ferraro didn’t want to get into specifics of the issue, but spoke generally.

“I found that they have spread some rumours that we are going to cut this program, it’s just scare tactics,” said Ferraro. “Walking into a thing with needy children and saying if you vote for Ferraro and the PCs, they are going to cut your programs. C’mon.”

The provincial NDP campaign has been much more harsh against the PCs, said Ferraro.

He said comments by the NDP that a PC government would cut hospital funding and lay off front line staff is not true.

“We never said this. We know we have to increase it immediately. That’s the key word, immediately,” said Ferraro.

“This gutter politics — that’s what’s turning people off, to be honest with you,” he said.

Ferraro admits he hasn’t spent much time knocking on doors, and when he does go to door steps, he often leaves the literature for people to read instead of ringing the door bell.

His campaign literature features a phone number and email and Ferraro said he returns those if people call or email.

He also declined to expand on the fact he has missed four of the eight local all-candidate events, reiterating it was for "personal reasons."

“I spent many hours getting back to people. Even the ones who started out aggressive — you talk to them. It’s very important that they can sense that you are a real person,” said Ferraro. “We fly below the radar, maybe, but I’ve got a really good team and we work really hard,” he said.