Owen MacDonald is preparing for the 2016 MasterCard Memorial Cup final on Sunday as he and his London Knights teammates face the Rouyn-Noranda Huskies
May 28, 2016 8:02 PM By: Brad Coccimiglio 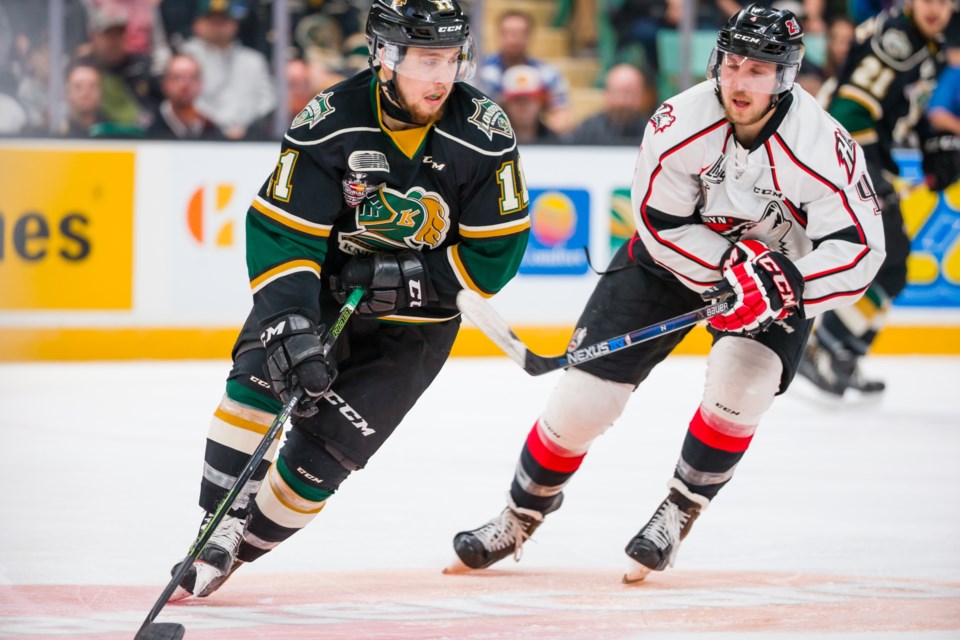 RED DEER, AB – He’s not sure exactly what the future holds but for Elora product Owen MacDonald, the immediate future is the main concern.

As a member of the Ontario Hockey League’s London Knights, MacDonald is in the midst of preparing for Sunday’s championship game at the 2016 MasterCard Memorial Cup.

The Knights went undefeated in the round robin and now prepare to face the Quebec Major Junior Hockey League’s Rouyn-Noranda Huskies on Sunday afternoon.

“We’re 3-0 and it feels pretty good but we’re not done yet,” MacDonald said. “The playoffs started a little shallow for us and Owen Sound gave us a wakeup call. After that we built off it. If we hadn’t lost those two games I don’t know where we’d be in the playoffs. Credit to our team and how we got together. We know what we need to do. We’re not done yet. We’ve got 60 minutes to play and it’s probably the most important 60 minutes of any of our careers.”

The Knights last loss was an overtime loss to the Attack on Apr. 1 in game five of the opening round series between the two clubs. London proceeded to win game six to clinch the series and has now won 16 consecutive games since that point.

“We’re focused on playing our game,” MacDonald said. “We know we’re fast and skilled so we play to our strengths. When Owen Sound beat us those two games, we knew we had to buckle down. We had a lot of first year players and they maybe didn’t know what playoffs are like. We built off that and here we are today.”

MacDonald called the opportunity to spend his OHL career with the Knights a special one.

“I’ve been here since I was 16 and they treat all of us with the utmost respect,” said MacDonald, who has played his entire career with the team. “They do anything to help us. If we need any help on or off the ice, they’re there to make it easier on us. They don’t develop hockey players, they develop good people off the ice too.”

Knights Coach Dale Hunter credited the 20-year-old and called him an integral part of the Knights success.

“You need those kind of guys,” Hunter said. “You see how hard he plays on the ice. He’s not a big guy but he plays big. You’ve seen it through the playoffs, he’s scored some really big goals. That’s what you need from your second- and third-line guys.”

“He’s a leader,” Hunter said. “His work ethic is outstanding. He shows it on the ice and also he’s one of the leaders in the dressing room.”

MacDonald was selected by the Knights in the second round of the 2012 OHL Priority Selection. He has suited up in 170 games with the Knights and was also a member of the Knights team that hosted the 2014 Memorial Cup but didn’t see action in any games in that tournament.

Game plan key for Memorial Cup entries
May 21, 2016 11:44 PM
Comments
We welcome your feedback and encourage you to share your thoughts. We ask that you be respectful of others and their points of view, refrain from personal attacks and stay on topic. To learn about our commenting policies and how we moderate, please read our Community Guidelines.