Mayor's Emergency Task Force to include those with 'lived experience'

Task force to address 'emergent needs and the root causes of homelessness, addictions and mental health issues and their link to community safety' says mayor
Dec 21, 2018 1:00 PM By: Tony Saxon 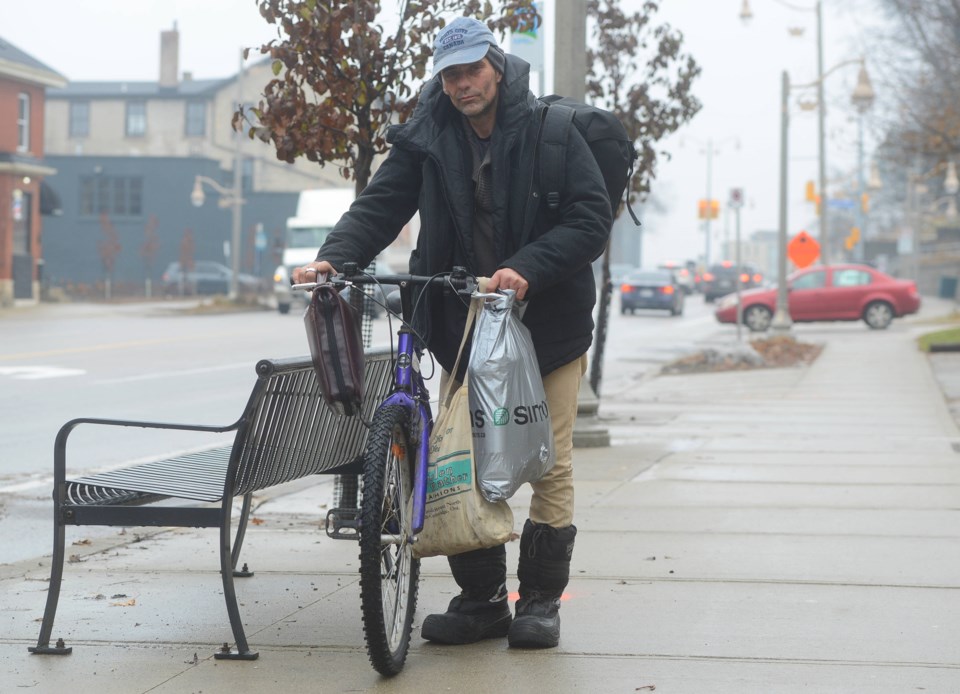 Clay Fry is the first to admit he’s no angel.

The 51-year-old Guelph man has had his brushes with the law – he says 25 charges in eight months – but many of them of the minor variety that he says stem from the fact he is homeless.

“I have no choice. It’s just to get by,” says Fry, who moved to Guelph eight months ago after stops in Mount Forest, Stratford and Hamilton.

Lately he’s been sleeping in a portable bathroom on a construction site out of the “goodness of the heart” of the site manager, he says.

Fry has started a petition to try and get a homeless shelter in Guelph.

He knows there are currently existing options and he knows that there are several agencies that offer help on an emergency basis. But he also says that the existing models don’t work for everyone.

“Some of us just need the warmth. A place they can work on themselves and get some help if they need it for their other issues,” said Fry, whose petition is available at the Drop In Centre.

“A lot of people are tenting, a lot couch surfing and a lot just walk the street looking for warm spots. Giving homeless people a place to go at night would help cut down on crime,” he adds.

Fry would seem to be the type of person that the mayor’s Emergency Task Force is aimed at.

Announced by Cam Guthrie during his inauguration speech on Dec. 3, the task force is aimed at creating some tangible solutions to issues that stem out of homelessness and poverty in the city.

Guthrie said that an initial brainstorming meetings have already been held “to hone in on exactly on what we want to tackle and and who are the best people to be part of the task force moving forward.”

At that meeting were the mayor, members of the Guelph and Wellington Task Force For Poverty Elimination, Wellington Guelph Drug Strategy, County of Wellington and city staff.

From that meeting, invites have been sent out to over 30 people who represent important stakeholders that will be at two meetings in January, the mayor said.

Guthrie said they are also looking for people with lived experience to be part of the group.

“The group felt that was really important,” he said. “Too often many of us think that we have all the answers but we’re not talking to people who have actually lived these conditions and lived these issues.”

The agreed upon preliminary mandate of the Emergency Task Force is to identify “key priorities for action and investment in addressing both emergent needs and the root causes of homelessness, addictions and mental health issues and their link to community safety.”

Guthrie said it’s important to note that “community safety” refers to both the community at large and improving the safety of those that are marginalized or homeless.

Terms of reference will be presented at the first January meeting.

“By the end of January is where we would have the recommendations,” he said. “I’m looking for anywhere between five to 10 for a top priority list where there is consensus around the table from everyone where ‘these are the things that would be really helpful for those that are in need in the community',” Guthrie said.

As stated previously, the mayor said that his personal preference will be about “action and action now.”

“I don’t want this task force to be about talking and then recommendations that come out and are then put on a shelf for another year or two.”

There are actions that are being taken around the community and the mayor said this is a good chance for the task force to amplify the good work already being done.

“It’s an opportunity for us to note that there is some good work being done in the community and we should be able to shine a light on that, but at the same time come up with a list of things that have potentially been waiting for partnerships to get something off the ground or to actually ask for anything that might have a monetary ask through the budget process.”