More than a million dollars raised for Guelph-designed board game

For the month of December, all three locations of The Round Table gaming cafe will be raising money for local food banks
Dec 3, 2019 8:00 AM By: Kenneth Armstrong 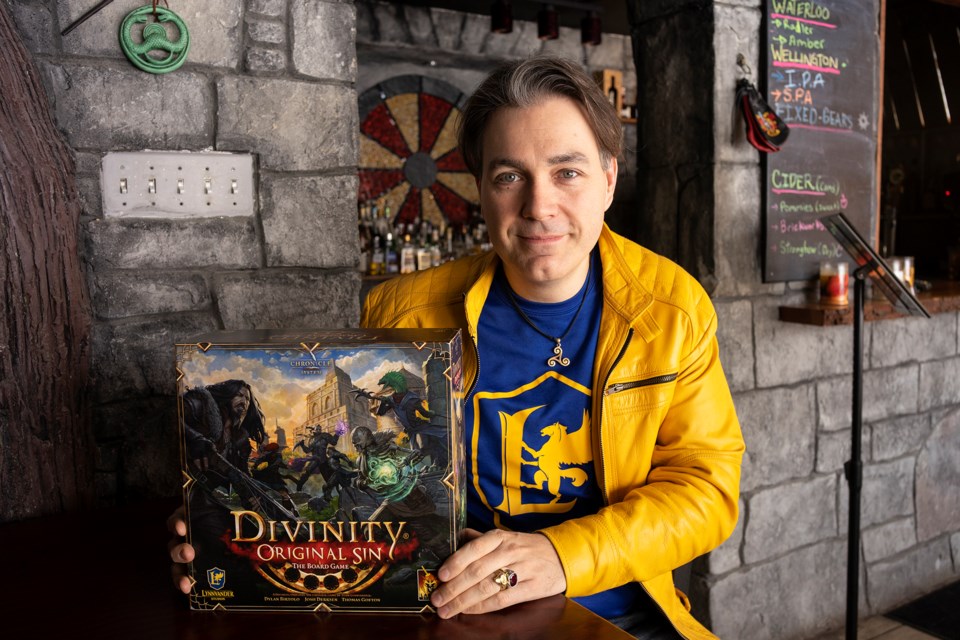 Thomas Gofton poses at The Round Table with a copy of Divinity Original Sin. The role-playing board game has surpassed the million dollar mark on crowdfunding site Kickstarter. Kenneth Armstrong/GuelphToday

Crowdfunding in the competitive board game industry can lead to heartache and unfunded projects for some, but Guelph’s Lynnvander Studios has so far raised more than $1.2 million toward its newest role-playing board game — much more than the $212,000 it was aiming for.

With 17 days to go, the Lynnvander Studios-designed game Divinity Original Sin is probably on its way to raising at least $2 million on crowd-funding web site Kickstarter, something creator Thomas Gofton said is life changing for a game designer.

“It’s cool. It’s the world stage for us,” said Gofton. “I have made some pretty decent titles for some pretty powerful licenses already that has changed my path but this is a new echelon.”

Previous titles designed by the Guelph company include Buffy the Vampire Slayer, DragonballZ and Cowboy Bebop.

The path to success with this most recent game came with some plot twists as Lynnvander was initially hired and then dropped by the company that contracted them to design it, Belgium-based Larian Studios.

Gofton said there were no hard feelings in the parting, which allowed Lynnvander to ask for another shot when the two companies banged into each other at a convention.

After some tweaks, the game was ready for its final pitch.

“We flew to Belgium, brought the final prototype and gave it the hail Mary and they loved it,” said Gofton.

For the last six months, Lynnvander has worked on getting the game ready to ship. Gofton said the company is working hard to ensure the game is a really good value for players, with about 60 hours of playing time.

“It has more playing time than some video games do,” said Gofton. “Which is impressive for something that comes in a cardboard box.”

One highlight for Gofton was flying to Ireland to shoot a promo video for the Kickstarter campaign in an ancient castle. Gaming web site Polygon recently said the video alone was worth backing the project.

“That was really exciting for me,” he said.

On Monday, another promo video was being shot a little closer to home, at the Guelph location of Lynnvander’s gaming cafe The Round Table.

Gofton said Guelph, Kitchener and Waterloo have become a hub in game design.

“People say there are a few design hubs in North America — one of them being Seattle,” said Gofton. “Believe it or not, the tri-city area is another one of them.”

There are three locations of The Round Table — in Guelph, Kitchener and Waterloo.

For the month of December, the gaming cafes are allowing patrons to add some money on their bill to donate to local food banks.

In Guelph, the donations will go to the Guelph Student FoodBank on the U of G campus.

The people who donate the most will be recognized on leaderboards posted at the cafes. Gofton likens it to crowdfunding to help local people in need.

“What we are doing is using our purchasing power to buy food at wholesale from our food distributors to go to the food banks,” said Gofton. “We are doubling or tripling the amount of food you can get for the same money given.”

“The Round Tables are built on the foundation of community. The atmosphere is made to come and have a good time,” he said. “It’s supposed to be a family-oriented space with inclusivity for all.”