Adoption announcement regarding the cats is expected from the Guelph Humane Society in the next few days
Jan 27, 2020 1:00 PM By: Anam Khan 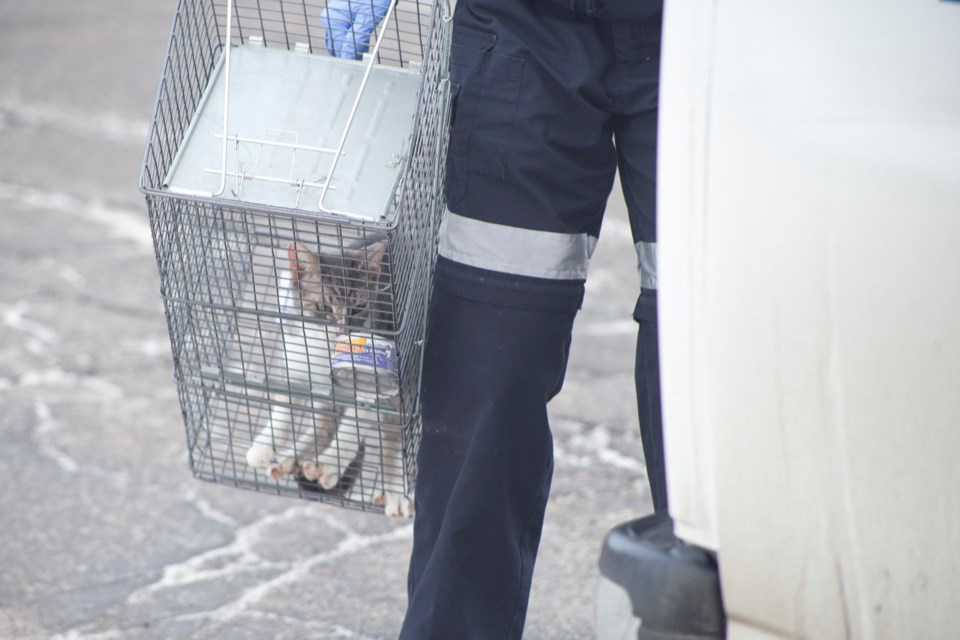 A cat in a trap is placed into a Guelph Humane Society van on Thursday, one day after a high number of cats were removed from an apartment on Huron Street. Kenneth Armstrong/GuelphToday file photo

There will be no charges for a Guelph woman who surrendered 105 cats to the Guelph Humane Society last week that had been living in her apartment.

The humane society issued the final tally on Monday.

The new Provincial Animal Welfare Services (PAWS) that investigates incidents said it has concluded its investigation.

“The ministry can confirm that an inspector attended the property. The owner of the cats then voluntarily surrendered the animals to the local humane society,” said PAWS communications coordinator Brent Ross.

Ross said the Ministry of the Solicitor General under whose auspices PAWS operates considers the matter to be closed.

Earlier this year, the Ontario Society for the Prevention and Cruelty to Animals announced that it will not enforce cruelty provisions after June 28. The province officially took over the enforcements through its Provincial Animal Welfare Services (PAWS) Act on Jan. 1, 2020.

Once they GHS took the cats in their care last week, they reported it to the PAWS hotline and a provincial inspector was dispatched to the location.

“We did our due diligence as an organization where we were concerned about the welfare of the cats in that situation and did report it,” said GHS executive director Adrienne McBride.

She said the cats are doing fairly well considering the high number of them living together.

“There’s certainly some of them that are going to need more medical care. But at this point were just triaging and slowly letting them adjust to the new situation,” said McBride.

The GHS provided the cats with basic medical care such as vaccines, microchipping and parasite control. Eye issues were detected in several of the cats.

McBride said the cats won’t be available for adoption until they undergo neutering surgeries, additional vaccines and are given extra time to adjust to their new environment.

She said an announcement about adoptions will be made by the GHS in the next few days.