Organizer Cynthia Kinnunen said it's a reminder not to quit on each other and proof that great things happen together
Nov 25, 2020 2:48 PM By: Tony Saxon 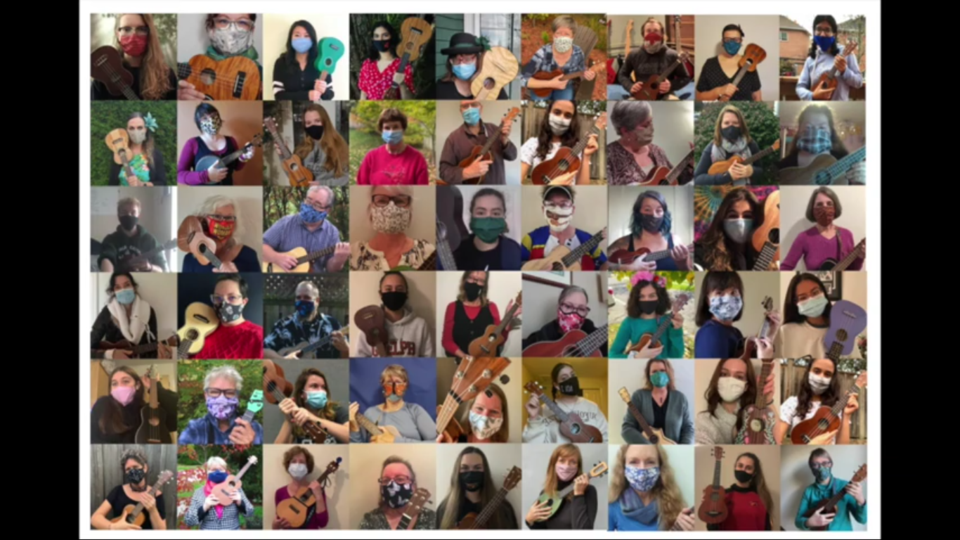 Over 50 ukulele enthusiasts in Guelph have produced a pretty impressive version of an Arkells song.

The members of the Royal City Ukulele Ensemble and Ukelear Bomb (a group of first year University of Guelph students) each recorded their own ukulele version of Quitting You, a melodic, rolling number by Canadian favourites Arkells.

Cynthia Kinnunen, who leads the Royal City Ukulele Ensemble and has taught ukulele in Guelph for many years, said that there were people ranging in age from 17 to 70 taking part.

Kinnunen said she's led several virtual recordings with the Royal City Ukulele Ensemble this year as her lessons have been done remotely.

"But since I was also teaching my U of G First Year Seminar class as well this fall and we were in a similar boat, learning remotely, I had the idea to bring the two groups together (in the final product) to help everyone feel a bit more connected," Kinnunen told GuelphToday.

She created a click track for them to play along with at home, they recorded their parts in isolation then Kinnunen spent about eight hours pulling the final 92 audio tracks together on the music creator platform Garageband.

"I had them each submit a photo with their uke (wearing a mask, for the pandemic reference) and built the little collage photo so everyone could see the group they had been part of.  Several students noted they felt like they were part of something in the community in this way."

She said she picked Quitting You by Arkells because she wanted a song that would be known to the university students, would be a fun one to play for all ages in both groups, had an interesting story to tell, and lastly, was by a Canadian band.

"I happened to hear Quitting You when Arkells released it this summer as part of their Campfire Songs and thought "that's the one!" It had a really catchy melody and I thought it would suit our big group of voices well. Arkells are also such a community-minded band I had in the back of my mind hoped they would get a kick out of it, too."

But first and foremost, Kinnunen said, it was about connecting in this challenging times using music and that mighty little ukulele.

Their version was uploaded to YouTube, although it is audio only, as each person recorded their own part and then they were combined.

Some of the collaborators just began learning to play the ukulele a few months ago.

“We'd like to think it can remind us not to quit each other, and that we can make great things happen together. Even when we feel alone, we can still connect.”

Arkells got wind of the effort, tweeting how much they liked it.

This is beautiful! Quitting You, featuring dozens of ukelele’s and a choir of voices. What a feat.

Bravo! We are honoured. https://t.co/Rl5bdOi4P4

City staff give thumbs up to a fifth storey for former Northern Rubber building
Jan 18, 2021 2:00 PM