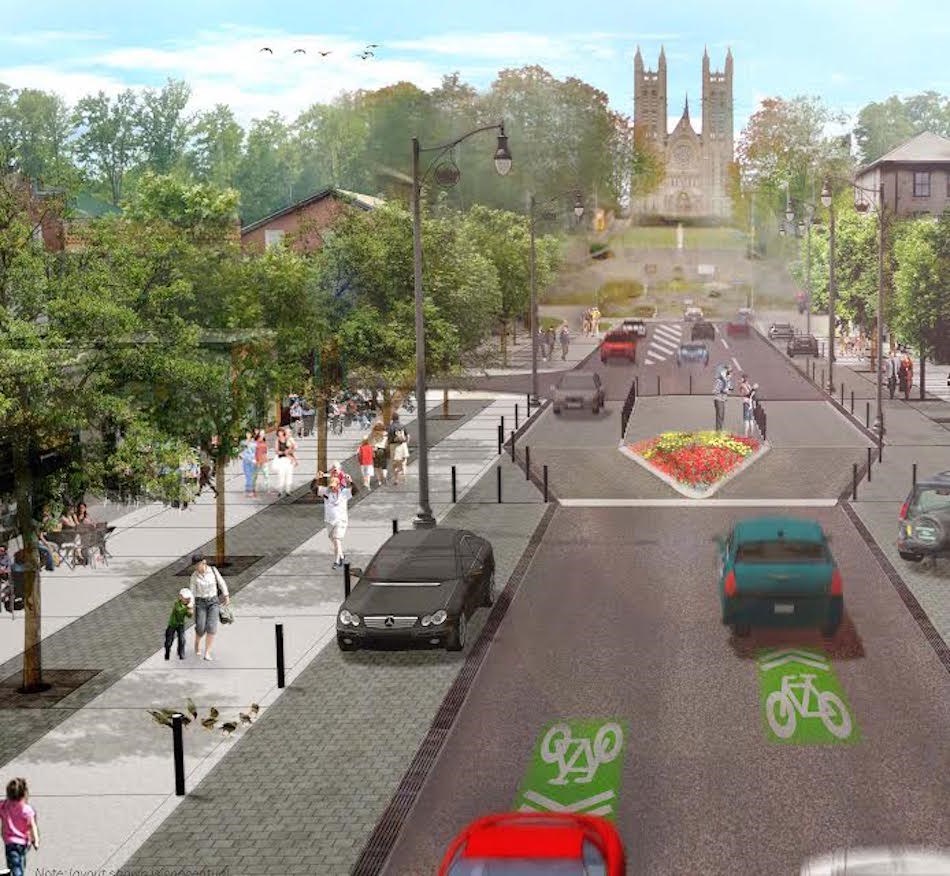 A design image from the City of Guelph's Streetscape Manual shows what a permanent pedestrian island might look like on Macdonell Street.

Last summer, when pedestrians and motorists navigated down and across Macdonell Street at Wilson Street they had to pass through or around an island.

The structure featured a few concrete planters complete with plants, directional markings on the street, and an area in the middle to stop and view Guelph’s defining vista, the Basilica of Our Lady. It was like a safe place to take a postcard picture.

The pedestrian island was removed last year after a lengthy trial period, but a permanent one is now in the plans for the Wilson Street reconstruction, a major $13.8 million project slated to begin in October. The project involves building a new, 350-space, multi-level parkade in the Wilson Street parking lot to help address a parking deficit in the downtown, and replacing the aging pedestrian bridge over Norfolk Street.

As well, the reconstruction will involve upgrading Wilson Street from Gordon/Norfolk Street to Macdonell Street, including watermain, sanitary and sewer replacement, sidewalk renewal, the addition of bike lanes, landscaping, and the pedestrian island on Macdonell.

David De Groot, Guelph’s senior urban designer, said the island is part of the detailed design work that has gone into the overall project. He said the Basilica of Our Lady is what’s known in the urban design world as a terminal vista – the end of a street with a very significant building as the predominant view.

The great church atop Catholic Hill in the downtown is Guelph’s defining landmark, and De Groot said residents and visitors alike are eager to photograph it from the best possible vantage point. And that point is right in the middle of Macdonell at Wilson.

“The city wants to give people the ability to view that vista and take that picture without having to dodge trucks or stand in the middle of the street,” he said, adding that the church is what Guelph is best known for. It attracts people to the city and to that spot on the street.

With the current configuration of Macdonell there isn’t a comfortable place to take in the signature view. The pedestrian island will act as a refuge in the centre of the street, creating a safe place to linger and admire the church.

The island will be about 15 metres long and five metres wide. According to the design drawings it will have a triangular planter at the back and a larger observational area in front, protected by a number of bollards, or small, thick posts. Single lanes in both directions, each with a traffic calming component, allow vehicles to pass around the island.

Design work on the Wilson Street reconstruction will proceed until July, with design details scheduled to go to city council also in July. The request for proposal process for the parkade will also go out in the summer.

The $13.8 million cost for design and construction is part of the 2016 capital budget, with funds coming from the city’s infrastructure capital budget.