Police chief looks back on career while looking forward to retirement

Chief Jeff DeRuyter began on patrol in 1984 before working his way up the ranks in the Guelph Police Service
Sep 25, 2018 8:30 AM By: Kenneth Armstrong 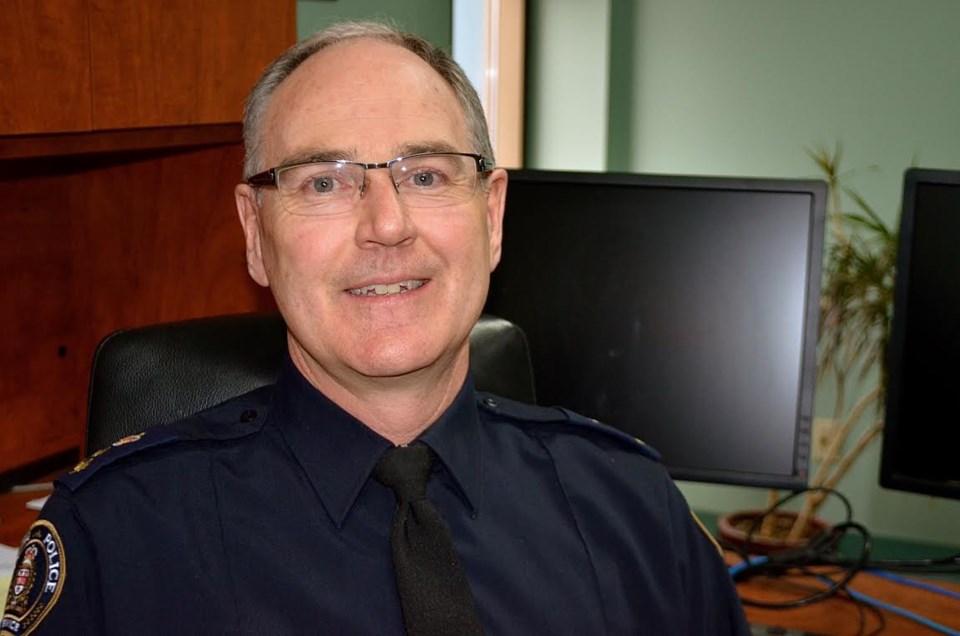 Chief Jeff DeRuyter of the Guelph Police Service sits in his windowless temporary office for a phone interview with GuelphToday about his upcoming retirement, he asks if the sun is shining.

“I lost my windows in the renovation,” said DeRuyter.

By the time the new chief’s office is complete, someone else will be sitting in the big chair.

“I do know whoever takes over will at least be settling into a new building and that’s something they won’t have to deal with,” he said.

On Friday the city announced DeRuyter’s retirement as police chief after almost 35 years of policing — all of it in Guelph.

“Many retirees that I have spoken with and have worked with over the years have said I’ll know when it’s the right time and that time came,” said DeRuyter.

His policing career began on patrol in 1984, before he moved to the traffic division, young offenders division and eventually investigations.

“When I started many of us were around 21 years old. Now the average recruit is older with more life experience. I think this reflects the difficulty, challenges and complexity of policing,” said DeRuyter.

“Policing is interesting because within the profession there are all kinds of jobs and I have been very blessed to have some of those,” said DeRuyter.

He said he is thankful to have been able to develop as an officer and to constantly be refreshed by new challenges.

“I thoroughly enjoyed my years in investigations,” said DeRuyter. “I found it challenging but really rewarding.”

Becoming chief was never a goal of his, said DeRuyter. He said he used the opportunity to develop the next generation of leadership within the service.

“It’s been a great honour to serve in this role,” he said.

The decision to retire was a personal one, said DeRuyter, but also comes at a time of change in policing — including the legalization of cannabis.

“It’s good for any organization to experience new leadership and someone coming in with fresh ideas,” said DeRuyter. He will continue to serve as chief until May 31, 2019.

It’s up to the Police Services Board to decide the process of selecting the next chief, but DeRuyter said he will participate if asked.

“I am sure they will take the time to do what they need to do to ensure the next leader of the service is someone who will move the service forward, but also carry on the excellent tradition of providing policing to our community,” he said.

In 2015, DeRuyter permanently assumed the role of chief after serving in an interim capacity after previous chief Bryan Larkin continued his career in Waterloo Region.

DeRuyter said he looks forward spending more time with family and travelling, but also to staying engaged in the community and plans to volunteer his time with a number of organizations that he said have made Guelph a better place to live.

“There are so many wonderful volunteer opportunities in our community,” said DeRuyter.

As chief, he has had an opportunity to work alongside many of those organizations and meet a broad cross section of the Guelph community.

“One of the highlights of being in the chair was just meeting so many people community members, the increased diversity in our community and the positives that come with that,” he said.

DeRuyter said he loves policing and is proud of the work he has been involved with and of others in similar services across Ontario.

“I can’t believe how quickly my 34-plus years have gone,” he said.