Stinky, moldy or gooey — new downtown cheese shop plans to carry them all 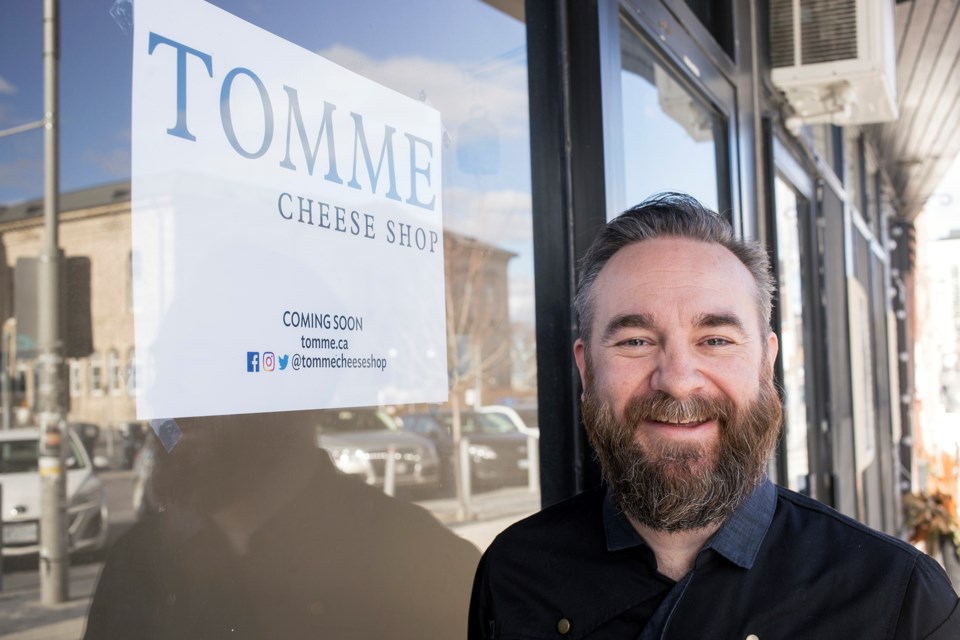 The owner of a soon-to-be open cheese shop on Carden Street says the strip of shops across from City Hall is becoming a foodie destination.

Andrew Wheeler plans on opening his TOMME Cheese Shop at 34 Carden St. in early May.

Wheeler took possession of the storefront earlier this month.

“One thing I had to have was a great location,” said Wheeler. “To be right on Market Square was a top priority for me.”

Wheeler knew he wanted to be involved in food in some way when he decided to transition from working with marketing and journalism.

He said his career was going well, but he wasn’t as passionate about it as he could be.

“What I am passionate about — and have been since I was in grade school — is food,” said Wheeler.

After doing some research, Wheeler identified a need for a cheese shop in downtown Guelph.

“We have beer everywhere, we have bread, we just don’t have any cheese,” he said.

The shop will offer cheese cut-to-order, making it simple for customers to try before they buy at the cheese counter he plans on including in the front of store.

“I want the cheese to be the star of the show. I want someone to come in and look at all these amazing moldy, wonderful, oozy, gooey cheeses they can try,” said Wheeler.

The shop will allow Wheeler to draw upon his love for food, and his background in communications, as he plans to share the story of each cheese with customers.

“I have gone to different cheese makers around the province here, to see what they do and to talk to them. See how they make the cheese. I want to take that experience downtown so when I sell the cheese I can say this is how it’s made, this is what the farmer told me. You get a real feel for the product you are buying,” said Wheeler.

He added, “I think what the farmers and the cheese makers do is amazing. It’s just thousands of years of history distilled down to this wonderful, delicious food.”

In December, Wheeler began teasing Guelphites with various photos of cheese on the store's Instagram account. He said building an audience on social media was a priority.

“I didn't want to start from scratch when we open the doors, so I have been so active getting the buzz out there,” said Wheeler.

Still almost two months away from opening, Wheeler was contacted by his new neighbours at 39 Carden to see if he was interested in developing the cheese course for their sold out Rosehall Run Winery dinner being held Wednesday.

“My doors aren’t even open and I was like, ‘of course I would. That would be great,’” said Wheeler.

For the dinner Wheeler chose a water buffalo camembert.

“As soon as you cut into it, it starts oozing all over the plate. We are serving that with rosemary honey and a crustini. It’s going to be fantastic,”  he said.

Carden Street is becoming all about food, said Wheeler, with 39 Carden, Eric the Baker and other establishments.

“We thought we would be a good addition to the mix,” he said.

Plans are in the works for partnerships with other local businesses to supply breads, crackers and charcuterie.

Wheeler said he personally leans toward the hard cheeses, “like a mimolette from France is absolutely amazing, but the ooey gooey stuff is just as good.”

The shop’s name TOMME — which rhymes with home — is itself a type of cheese.

Wheeler said the shop will feature cheeses from far and wide, but he is especially interested in showcasing Canadian cheeses.

“I think we make some really amazing cheese in this country,” he said.