'It’s pretty dramatic to see that change along that (Gordon Street) corridor, and that is what we are envisioning in our other intensification corridors, as well'
0
Nov 7, 2019 8:00 PM By: Kenneth Armstrong 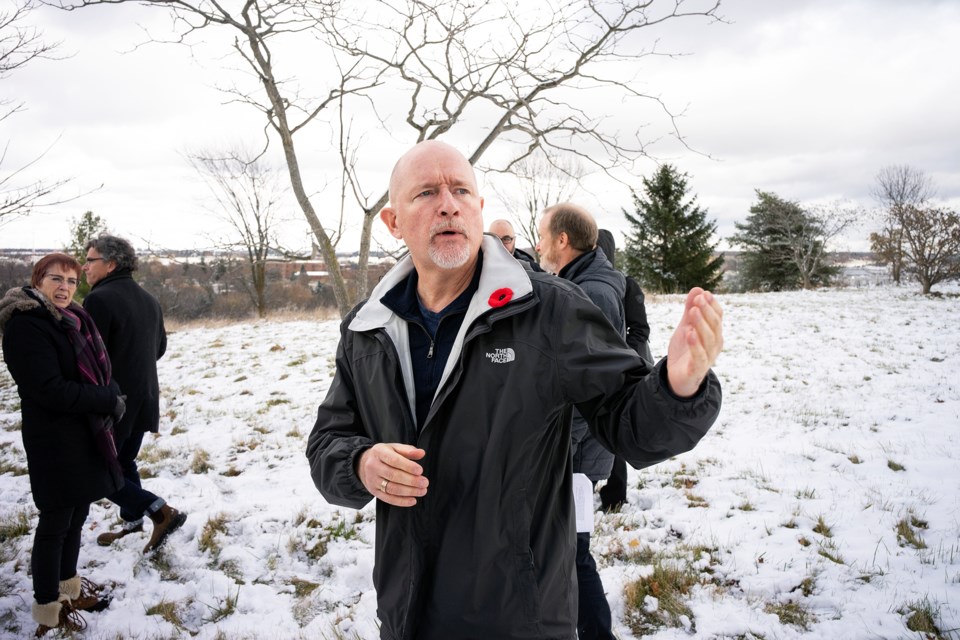 Todd Salter, Guelph’s general manager of Planning, speaks to members of the public who came for a tour of projects as part of World Town Planner Day. Kenneth Armstrong/GuelphToday

Members of the city’s planning staff offered the public an open house and tour of current and upcoming developments in Guelph on Thursday as part of World Town Planning Day.

About 15 members of the public and about an equal number of staff packed into a Guelph Transit bus late Thursday morning for a tour of the proposed Guelph Innovation District and to view the Gordon Street intensification close up.

Although planning staff usually mark the day with a public display, this is the first year it has offered a bus tour, said Todd Salter, Guelph’s general manager of Planning.

A display of maps and charts was held in a public room at Guelph City Hall starting at 11 a.m., with the charter bus pulling up about 11:45 to take members of the public to see the projects in person.

“We thought it would be cool to get out and look at the places we were talking about,” said Salter.

First stop on Thursday’s tour was the Guelph Turfgrass lands which, along with the Wellington Detention Centre Lands, will eventually  make up part of the proposed Guelph Innovation District.

Plans for the land, which are provincially owned and are on the market, are a mix of employment, residential, commercial and natural heritage uses. The project does not have a completion date, but is likely 15 to 20 years away from the vision being fully realized.

Salter said the lands are a blank slate for planners to chart the future of that area of Guelph, while acknowledging that adjacent conservation lands must also be protected and planned around.

“Parts of the existing city are planned to evolve and change,” said Salter. “We have to guide that in a way, while being sensitive to what is around and how they are affected by the change.”

Salter said planners have to respect the past of any area they are working on, while valuing the neighbourhoods as they are when planning for the future.

“We have one foot in the past, one in the present and a third foot in the future, if you will,” he said.

Planners have to be aware they are planning places where people will live and work, said Salter.

For the second stop on the tour, the bus parked at the Salvation Army Citadel on Gordon Street near Arkell Road to talk about the Gordon Street intensification, which is currently in progress.

The southern parts of Gordon Street were brought into the city’s boundaries in the early 1990s, said Salter. Once rural and low-density, Gordon Street has become more built up in recent years, with more projects in the planning stages.

The southern section of Gordon Street was identified by staff a few years ago as an area that could be intensified — built up to offer greater population density.

“The plan for the city is to grow within its boundaries so we don’t get into urban sprawl. A big factor in that is intensifying,” said Salter.

“It’s pretty dramatic to see that change along that corridor, and that is what we are envisioning in our other intensification corridors, as well. It’s just that Gordon Street is the first one,” he said.

Along with the added population comes all of the things that go with it — need for added retail and services, public transportation and other considerations.

“City growth and evolution is an ongoing thing, it’s not like you reach an end state,” said Salter.

Public engagement is naturally part of the planning process for any major project, but Salter said it was good to have members of the public coming out to the open house to see what the 25 city planning staff work on daily.

“There can be a natural reluctance to change, so part of it is helping the community to understand the value of change,” said Salter. ““Our planning staff are really enthusiastic and love what they do.”

Severe thunderstorm watch expanded for Guelph and area
Jun 2, 2020 8:14 PM
Comments
We welcome your feedback and encourage you to share your thoughts. We ask that you be respectful of others and their points of view, refrain from personal attacks and stay on topic. To learn about our commenting policies and how we moderate, please read our Community Guidelines.