The folksinger in James Gordon is back with new CD 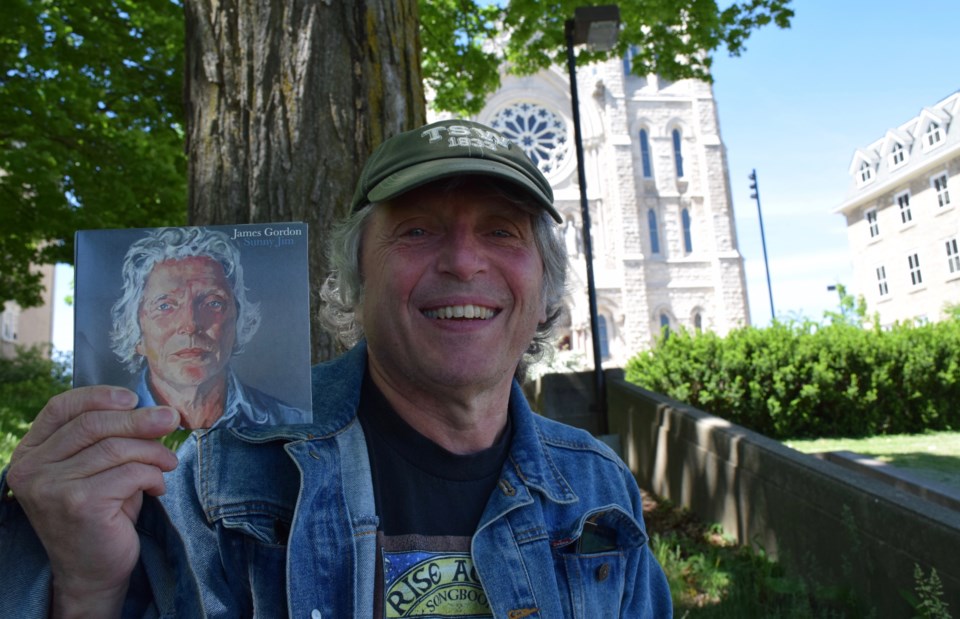 James Gordon with his new recording Sunny Jim, released a few days ago.

Sunny Jim is kind of a sad guy. He’s been hurt, and hides his pain inside behind a big beaming smile. He’s hard on himself, wants to fix everything, and change the world. The song may be Gordon’s way of giving himself permission to ease up on himself, to take the good with the bad, to rest and heal, and to allow people to see his various shades, and not feel so compelled to be the fixer.

“I sometimes get accused, sometimes in my political life, my public life, of always trying to make everyone around me happy,” he said. “But is that a valid goal, and does that create a persona for you that makes you inauthentic? The song is sort of a message to myself that I don’t always have to be on, or always meet everyone’s expectations of who they think you are.”

The album cover featured a portrait of the musician with an introspective expression, done by Guelph visual artist Greg Denton.  Gordon’s sons Evan and Geordie play on the album, and Evan produced it.

The recording includes 12 songs, some highly reflective, some more political, and others steeped in the ideals of community building and environmental protection the politician/artist is known for.

Gordon wasn’t exactly keeping count, but an interviewer recently pointed out that the album, from Gordon’s long-time label Borealis Records, is his 40th recording, counting some 17 he did with the renowned Canadian folk troop Tamarack.

On Sunny Jim he has newly recorded his own version of “Frobisher Bay,” a song he wrote for Tamarack many years ago. The dramatic tune has been recorded by over 100 artists around the world.

Sitting along the great flight of stairs up to Basilica of Our Lady, Gordon said his goal as a songwriter is to interweave the personal with the universal. When he gives song-writing workshops he encourages budding songwriters to put themselves into a song, but also to allow the listener to see themselves reflected in it.

“My biggest thrill as a performer is when someone comes up to me and says, ‘You know that song you sang about loss, that really reminded me of my father,’ or something like that,” he said. “Then I know I’ve really made a connection.”

Gordon said a music career is not what it used to be. There’s not much of a living to be made selling records anymore, and the business of the music business has become much more challenging.

But with his hectic schedule as a city councillor, and with the many other community responsibilities he has, he is happy to have the creative work and play of song-writing and recording to take the edge off and transport him to the world of the imagination.

That world reflected in his songs is varied, highly visual and as introspective as that cover portrait. “This Canoe Runs on Water” is a song he oft performs, but this is the first time it’s appeared on a recording. Any lover of canoes built of wood will feel the romance of its cedar strips and the sleek curvature of its gunnels.

“Took the Long Way Home” is a lonely, sombre piece about a long, meandering walk through an urban landscape of “desperate boulevards” and “rusted cars filling up with vines.” It is an allegory for the life journey and the swift passage of time. Around the final bend is a forever friend, constant and stable despite the passage of time.

Gordon is a very busy guy, but one of his songs, “Are you Busy?”, is a push-back on the tendency to be too busy to spend time with others. The song asks us to consider being less busy, to invite a friend to stop trying to change the world for a few hours and to get out past the urban sprawl and streetlights, and enjoy some quality time in nature.

“Do we have to fall into that cultural trap of always being so busy, and how do we get out of it?” he said. “And the way I get out of it is to get out of town and into nature, where it’s anything but busy. Nature has its own flow to it, and it’s an important part of my life.”

As busy as he might be, Gordon is going to take some time to get busy on a tour to promote his new CD. A series of four CD release concerts are planned, beginning on Saturday, June 11, 8 p.m. at The Pearl Company in Hamilton. Then it’s Toronto’s Hugh’s Room on June 16, playing with his musician sons.

His Guelph release concert, as with Evan and Geordie, is at Heritage Hall on Friday, June 17, starting at 8 p.m. Tickets are $20 and $15 dollars, and available at www.jamesgordoncdrelease.eventbrite.ca.

The series ends in Collingwood at the Simcoe Street Theatre on June 18. Visit www.jamesgordon.ca for more on the concerts and the artist.

Before being elected to city council in 2014 – he ran in the Guelph riding for the New Democrats provincially that same year – Gordon toured his stage production, Stephen Harper: The Musical.  The play’s run came to an end after Harper was defeated. Gordon returned to writing songs.

“I was developing a collection of songs that had a bit of different perspective to them and I wanted to share that,” he said. “I know I have a fan base across North America, but because of the connections I made with that Harper play there are new people going, ‘What’s that guy all about?’ I’m hoping this is a way to share my songs with them.”