The Ward is getting a new park 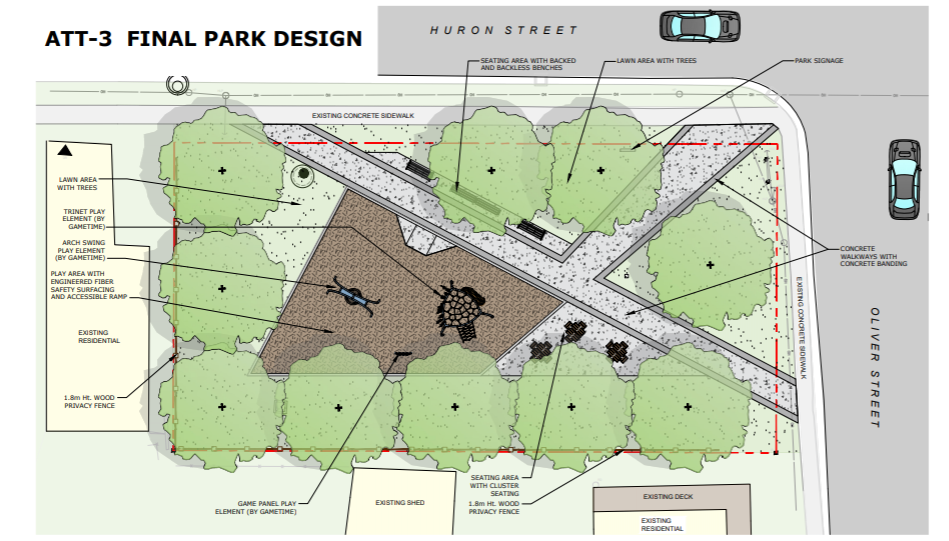 FInal design of a new park planned for Oliver Street.

The city is purchasing an empty lot in The Ward that will be turned into a park by next spring.

The lot is at 104 Oliver St., located between Oliver Street and Alice Street across from a large new condominium and townhome development on Huron Street.

City council approved that staff proceed with the purchase of the lot and that it be developed into a park at a closed meeting of council on Aug. 24..

Construction will start this fall and the park will be ready for use in the spring of 2021. The new park has been designed by the developer and approved by city staff, says a city news release.

The park will include open space, trees, pathways, seating and a playground taht includes a swing and climber.

"The purchase of the Oliver Street property will be made with a portion of the cash-in-lieu of parkland dedication from nearby development applications at 120 and 140 Huron Street, at the intersection of Huron and Alice Streets. When a property is developed like those on Huron Street, the developer has to either dedicate a portion of the property to the city as parkland or pay cash-in-lieu so the city can purchase new parkland elsewhere," the city release says.