Driver pulled out to pass a vehicle on a hill and ended up killing 27-year-old Kate Lindsay in a head-on collision
Jul 23, 2018 4:00 PM By: Tony Saxon 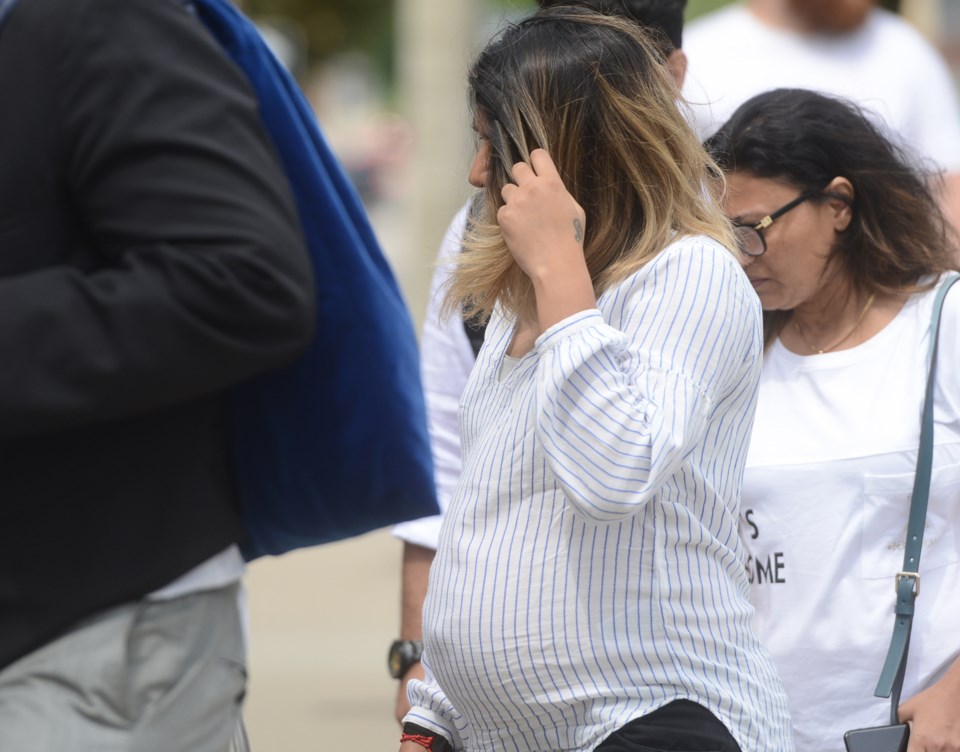 Harvy Panchal, centre, hides her face with her hair as she enters a Guelph court on Monday, July 23, 2018. Tony Saxon/GuelphToday

The friends, family and fiance of Kate Lindsay burst into tears in a Guelph courtroom Monday as the woman who caused the 2016 crash that claimed her life was found guilty.

Ten people, all wearing purple cloth hearts pinned to their chest in memory of the Cambridge woman, cried and hugged one another as Justice Gordon Lemon found Harvy Panchal, 26, guilty of dangerous driving causing death.

During a break in the proceedings, Crown attorney Julia Forward also broke down in tears and hugged the family members and friends who have faithfully attended the court proceedings.

Panchal, who is seven months pregnant, will be sentenced on Dec. 12.

Dressed in black pants and a white blouse, Panchal showed little emotion as she listened to an Indian language interpreter translate as Lemon read his written judgment.

Panchal was driving her Hyundai Veloster southbound on Wellington Road 35, 10 minutes south of Guelph on July 16, 2016, heading to African Lion Safari with her boyfriend and his brother.

After passing a truck, she then tried to pass a red car on a hill but was unable to do so when that car increased its speed, like it was”playing chicken,” according to an eyewitness.

The judge said evidence showed Panchal spent 20 seconds in the other lane attempting to pass the red car.

As she was attempting the pass, Lindsay crested the hill in the southbound lane in her Ford Focus.

At the last instant, both cars, each travelling roughly 90 km/h, swerved onto the east shoulder where the head-on collision took place.

Lindsay was killed. Panchal and her passengers suffered minor injuries.

Part of Panchal’s defence was that the car she tried to pass sped up to prevent her from pulling back into the northbound lane.

Justice Lemon said Panchal should have slowed down and pulled back in.

“I find that a reasonable person would have seen the risk of passing on the hill as soon as Ms. Panchal pulled into the northbound lane,” Lemon said.

“Further, as soon as the red car sped up, a reasonable person would have slowed and reentered the safe southbound lane.”

Lemon said it was “astonishing” that Panchal survived the collision.

The judge said that in the eyes of the law being careless and negligent was not enough to warrant a conviction, but that Panchal’s driving was a “marked departure from the standard of care that a reasonable person would observe in her circumstances.”

Lemon said that the fact the red car sped up does not exonerate Panchal.

“At that point, she should have slowed to pull back into safety,” he said.

Prior to sentencing, the Crown and defence attorney will go before the judge on Nov. 13 to make pre-sentence submissions.