Toronto Argonauts open training camp at the University of Guelph on Wednesday with three Gryphons on the field
May 25, 2016 7:30 PM By: Tony Saxon 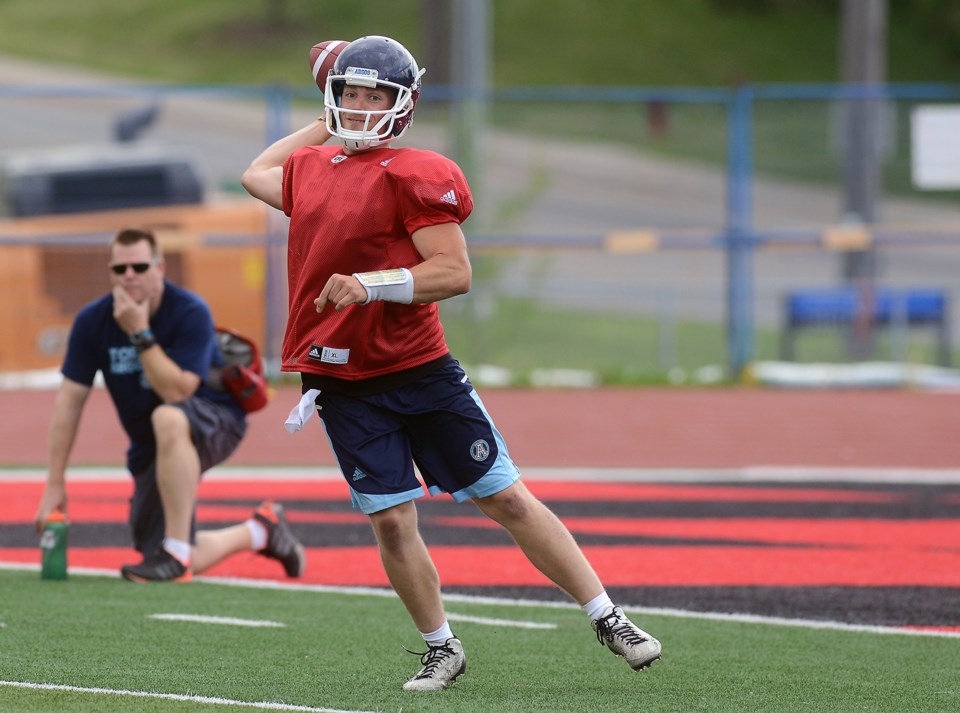 There were no butterflies for Guelph Gryphons quarterback James Roberts Wednesday as he stepped onto the practice field at the Toronto Argonauts training camp at Alumni Stadium.

"There's nothing to be scared of. I'm just here to learn: watch the other quarterbacks and a guy like Ricky Ray, learn from them and try and incorporate it into my game," Roberts said.

Roberts is in camp as an invitee under the Canadian Football League's mentorship program, which assigns one Canadian university player to each team for development purposes.

Wednesday was the first of a three-day rookies and quarterbacks pre-camp that took to the field Wednesday at Alumni Stadium. Veterans report Saturday.

Roberts, a Cambridge native with two years of university eligibility remaining, isn't allowed to play in any pre-season games and on Wednesday didn't take any snaps while the team was running plays, but it's still a win-win situation.

"It's 100 per cent a win-win situation, there's no losing in being here, that's for sure," Roberts said.

"They're all welcoming. They're all nice. Hopefully as time goes on I'll pick their brains more and learn from them. It's great to be in this environment and learn what pro's do. It's awesome."

Newton and Nieuwesteeg were drafted by the Argos earlier this month. They are both eligible to return to play for the Gryphons in the fall.

Newton, a linebacker, and Nieuwesteeg, a receiver/kick return specialis, aren't just there for the experience, they're there to make a lasting impression.

"Obviously you want to make the team, but I'm going to take whatever route happens, and if they decide to send me back (to the U of G) then I'll come back sharper next year. But obviously the goal is to make the team in some capacity this year," Nieuwesteeg said.

Despite the amount of success he's had on the Alumni Stadium turf over the years, there were still some nerves walking out there Wednesday afternoon.

"We were doing the first special teams drill and I had to get the butterflies out during that," Nieuwesteeg said. "Obviously the tempo and the play calls are a lot more complex than the university level, so to get that out of the way was a little bit tricky, but I started getting into it.

Nieuwesteeg said there is a tendency to think a little too on the field until you get comfortable.

"It can play to your advantage or your disadvantage. You think so much because you care, but at the same time you don't want to over think," he said.

Nieuwesteeg also said that you feel the attention.

"Oh yeah, for sure. But it's nice to be here on your home campus, that makes things a little more comfortable and you just want to come back out better tomorrow."

Workouts are open to the public.