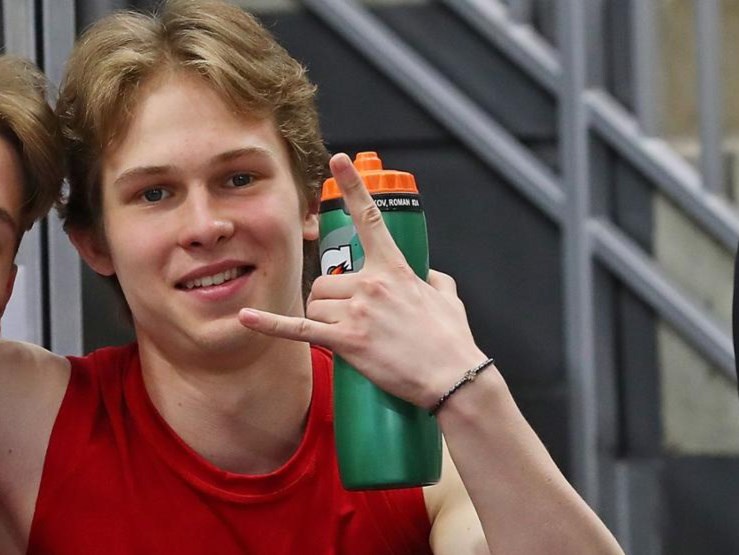 The Guelph Storm stuck with its recent trend of drafting Russian players Thursday when it took two more in the annual CHL Import Draft.

WIth its first pick, 38th overall, they took big winger Andrei Bakanov, 17, and with their second pick they took defenceman Roman Bychkov, 18.

"The information on both kids is positive about the desire to be here, we just have to work through all the different avenues now to make things happen," said Storm general manager George Burnett said of the chances both players will report to Guelph.

Bakanov, who stands 6'2" and weighs 225 lbs, had 14 points playing for the  Cedar Rapids RoughRiders of the United States Hockey League last season. He has an NCAA commitment to the University of Michigan.

"There's nothing 100 per cent secured, but we have great information, we worked with his group before, everything seems to be positive at this particular time," Burnett said when asked if Bakanov will report to Guelph.

"When we knew he was going to be available it was a very easy choice. He's a young man that brings a number of different attributes to the talbe: size, skill and scoring."

Bakanov has played the last three seasons in the United States after coming over from Russia. He was one of the top-rated forwards in his group for the 2017 OHL draft but was ruled ineligible. He is a highly-regarded prospect for the 2020 NHL draft.

Bakanov has the same agent as former Storm players Alexey Toropchenko and Andrey Pedan, Burnett said. He also was a teammate of Storm defenceman Daniil Chayka on the Russian team at the World Under-17 Challenge.

"There's nothing foolproof, but every discussion has been positive to this point," Burnett said.

Bychkov, 5'11" and 170 pounds, is a left-shooting blueliner who was taken in the fifth round of the recent NHL draft by the Boston Bruins.

He had 15 points in 40 games playing for his hometown Loco Yaroslavl junior team last season and played for Team Russia at the world under-18 tournament.

"Again, our contact that we have there was very high on him, very positive, an

"The priority for us was to add an older 'D' in this draft that could come in and help our younger group back there. He's certainly a guy that meets that criteria.""Indications are in speaking with his representative and his future club team that there's a good possibility that we can see him here in the fall," Burnett said.

A look at how last year's Storm players are faring
Feb 21, 2020 2:30 PM
Comments
We welcome your feedback and encourage you to share your thoughts on this story. We ask that you be respectful of others and their points of view, refrain from personal attacks and stay on topic. To learn about our commenting policies and how we moderate, please read our Community Guidelines.