"I knew they were one of the teams that had a lot of interest with me. You can tell by interviews and the questions they ask you"
Jun 27, 2016 9:00 AM By: Tony Saxon 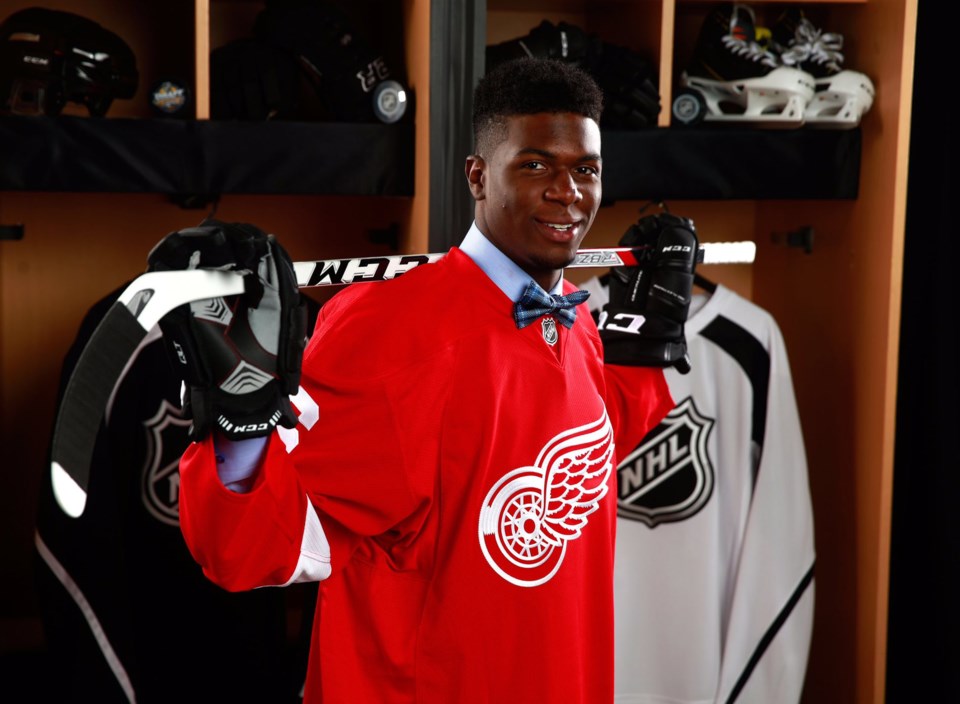 Givani Smith will probably be able to afford a travel plan on his phone soon.

The Guelph Storm winger had his phone on airplane mode Saturday when he was drafted in the second round of the National Hockey League entry draft by the Detroit Red Wings in Buffalo.

“My phone was off. I didn’t want to get the roaming charges,” Smith said over the phone from his Toronto home the next day.

“I got a ton of messages as soon as I switched it back on when we crossed the border that night. The phone wouldn’t stop buzzing,” said Smith, who was selected 46th overall in the NHL draft.

Storm teammate Noah Carroll was taken in the sixth round by the Carolina Hurricanes.

Luckily Smith had plenty of support at the draft, with a large contingent of family and friends sitting with him in the stands when the Red Wings announced his name.

“I had a pretty good feeling I was going to get taken in the second round, but I was still pretty surprised to be taken that early in the second,” said Smith, who was expected to go anywhere from the mid-second round to late in the third round.

Smith had 24 goals and 19 assists last season, along with 146 penalty minutes.

“I knew Detroit was pretty interested and the interview during the (NHL) combine went pretty well. I knew they were one of the teams that had a lot of interest with me. You can tell by the interviews and the questions they ask you.”

Smith was interviewed by 23 teams at the combine.

“It felt really nice. We went Friday and sat there for four hours, watching all the guys get picked. I thought ‘wow, I want to hear my name called now.’ But I went pretty early on the Saturday.”

He's a big, strong powerful kid that plays nasty,” Wright told the Free Press. “It’s that innate instinct that you either have or you don't have. You don't develop it. He loves it. He relishes that role. If he's not factoring in offensively, he's making their other best players really be aware of what's going on on the ice.”

He said it’s also been “surreal” to see the support from Red Wings fans that have been following him and messaging him on social media all weekend.

Smith said being drafted means less pressure heading into next season with the Storm.

“It’s finally nice to be over. The whole season the draft is in the back of your head wondering what’s going to happen. Now everything worked out and I can relax and focus on getting prepared for the next season.”

Smith will join the other Red Wings prospects July 5 at a development camp in Traverse City, Michigan.